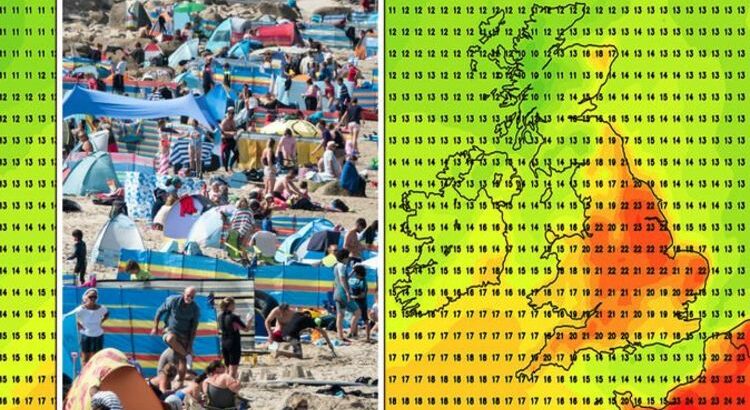 Netweather forecasts hold the end of September will see an unseasonal return to temperatures above 20C (68F) by Sunday September 26th. The forecasters suggest high pressure will “dominate over Scandinavia with low pressure over Iceland, resulting in southerly winds blowing frequently over the British Isles”.

In their forecasts, Netweather says September 26 sees the south-east record temperatures of up to 23C (73.4F) in Norwich.

Temperatures will then peak for the south-east on Wednesday September 29th, with Essex and Kent seeing 24C (75.2F), before remaining unseasonably balmy for late September.

The north and midlands will miss out on the mini-heatwave, with Newcastle and Glasgow seeing temperatures of 9C (48.2F) on Wednesday evening.

Moving into the end of the month, temperatures will begin to fall in the south-east according to Netweather, with parts of Surrey seeing 21C (69.8F) on Thursday, September 30.

Describing their long-range forecast, Netweather admitted “confidence reduces during this period but it looks like the Scandinavian blocking high will hold firm”.

They added: “Temperatures will continue above normal, though generally not exceptionally so, with rain belts moving in from the North Atlantic more frequently and moving more freely from south-west to north-east.

That said, the rain belts will probably become lighter and patchier as they head into sheltered north-eastern areas. In the brighter interludes in between the rain belts, there may be some heavy and locally thundery showers in the west and south.

“Later in the week, we may see winds switch to a west to south-westerly with high-pressure building in the south, giving a more traditional northwest-southeast split in the weather, with drier, sunnier weather towards the south-east.”

The Met Office’s long-range forecast holds that the UK will see “widely unsettled” conditions by the end of September.

It said: “From the weekend onwards, a very general northwest to southeast split to our weather is likely to develop.

The northwest is expected to see the most of any unsettled conditions: outbreaks of rain, possibly heavy at times, and strong winds, possibly coastal gales.

“Drier and sunnier weather looks more likely across the southeast, though unsettled weather in the northwest could still spread here at times.

“Temperatures generally near or slightly below average, but may slightly rise towards the end of this period.”

BBC Weather also holds that high pressure will build throughout the end of the month.

They said: “There will likely be warm spells of sunshine and light winds. Uncertainty remains for Wednesday, but it will likely turn quite breezy through the day with a few showers likely.

“Conditions are expected to turn increasingly unsettled, but there is uncertainty in the detail.

“Heavy bands of blustery rain are likely for Thursday.”

It comes after the Met Office issued a yellow rain warning for much of the east of England on September 19.

The warning is in effect from midday through to midnight, with heavy showers potentially leading “to localised flooding and disruption to transport”.

The Met Office said: “Cloud and outbreaks of rain across central and western areas moving eastwards to become slow-moving this afternoon, with some heavy downpours developing…

“Heavy, thundery showers in eastern Britain slowly petering out through second half of the night.”