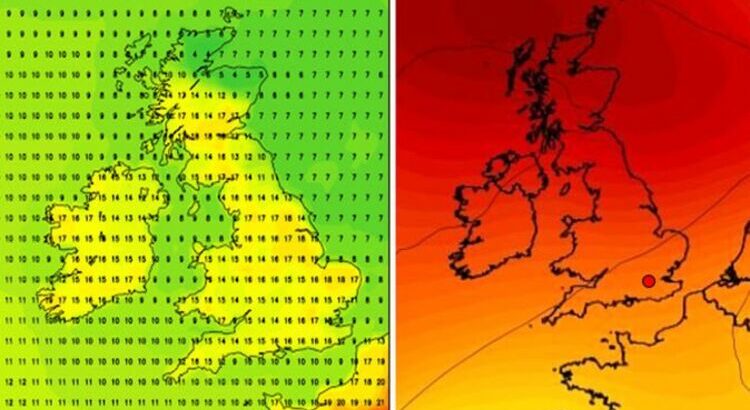 Blue skies and golden rays in the run up to the weekend will drive what could be one of the hottest starts to spring in a century. The mercury will rocket across the country with a plume of tropical air to bring highs of 21C (70F). Jim Dale, meteorologist for British Weather Services, said: “We expect general highs of 21C (70F) in the warmest spots over the next couple of days.

“But in direct sunshine, it might be possible to record temperatures of 30C, the sort of temperatures which can make it hot enough to fry an egg on a car bonnet.

“This can bring the risk of sunburn, so this is something for people to watch out for.

“Certainly, for the next few days, much of the country will enjoy a very pleasant period of spring weather.”

The Met Office warns UV levels will hit ‘moderate’ this week, reaching four across southern England on a scale of one to eight, and between two and three further north.

Glorious sunshine has pushed temperatures well above average for March with the hottest day of the year expected to be yet to come.

Britain will enjoy at least another five days of almost summer sunshine, according to the Met Office.

Clear skies under high pressure may bring some frost in rural regions and morning frost.

Met Office meteorologist Aidan McGivern said: “There is plenty more spring sunshine to come for at least the next five days or so.

“Up and down the country it is looking like blue skies will prevail.

“We are looking at a touch of frost overnight into Wednesday, we are under high pressure at the moment which is keeping us in this warm southerly airflow.

“There will be one or two fog patches which will disappear in the morning.”

The dominating high pressure ‘anticyclone’ will keep low pressure at bay to the west making for mostly dry weather.

However, Scotland and parts of eastern Britain may see the odd shower, although Britons would be ‘unlucky’ to catch one.

Mr McGivern added: “There is the possibility of a shower breaking out in Northern Scotland and eastern England, but this is a very small chance and the prevailing theme is for blue skies, sunshine and warmth.

“Clear skies continue into Wednesday night and again into Thursday which is another sunny-skies day, and we expect similar conditions on Friday.”

John Hammond, meteorologist for weathertrending, said warm weather will hold out through the rest of the week.

However, there are signs of cooler conditions arriving after the weekend as the weather takes on a more easterly flavour, he warned.

He said: “The warming trend will continue into mid-week, and it will be dry everywhere with a lot of sunshine.

“There might be a bit of a cooling trend as we head towards next weekend as a bit of an easterly breeze returns.

“But somebody somewhere will get into the low-20Cs this week which is well above par for the time of year.”

Rocketing temperatures threaten a raft of daily records for warm weather as hopes grow for a blazing spring.

Forecasts for more hot weather have prompted bookies once again to take the axe to odds for spring records.

Coral is offering 4-5 from 6-4 on this spring turning out to be the hottest on record amid predictions for sunshine into April.

Spokesman John Hill said: “It has been a glorious start to spring and with a heatwave on its way early next month, the odds have been cut on this ended as a record hot spring this year.

“Temperatures look set to soar further in April, and as a result, we have slashed the odds on next month being the hottest since records began.”