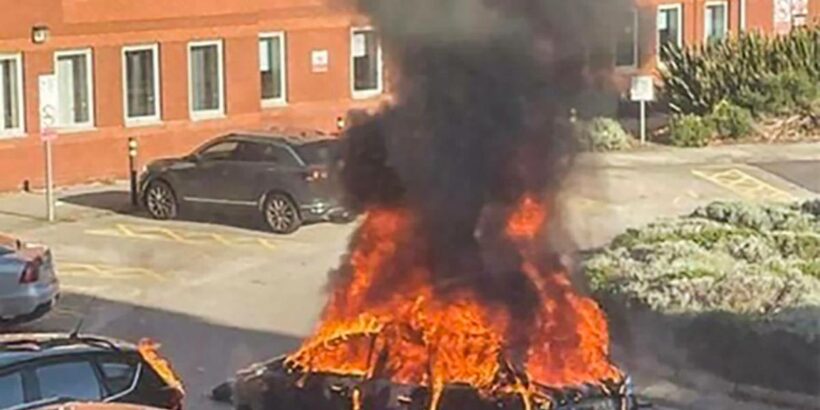 The announcement comes after Prime Minister Boris Johnson chaired an emergency Cobra meeting to discuss the Government’s response to the shocking Liverpool incident.

Patel wouldn’t be drawn on whether there was specific intelligence behind the raising of the threat level.

A taxi driver was hailed a hero for thwarting a tragedy in the UK’s northwest by trapping a suspected bomber in his cab.

Dave Perry leapt from the car and locked the doors as the device exploded at Liverpool Women’s Hospital yesterday — killing only the male passenger who carried the bomb.

Perry is currently stable in hospital with burns and shrapnel injuries, including damage to his ear.

Three suspects – aged 29, 26 and 21 – were subsequently arrested under the Terrorism Act.

It was confirmed a fourth man, 20, was held by officers, with all four suspects to be quizzed by counter-terrorism officers.

Local cab drivers said on social media it was their friend who had locked the suspect inside the car.

Stephen Thomas added: “The driver is my mate, and spotted the passenger acting suspiciously, so he jumped out the car.”

He went on: “This guy blew himself up, but my friend is OK. He sustained a few injuries, burns, burst eardrums and some shrapnel, but he’s OK.”

However, cabbie Kev Cuthbertson posted: “It’s my mate who got blown up. He’s in a bad, bad way.

“He’s a fellow driver. He’s had his ear sewn back on, got burns and shrapnel wounds and other pretty serious injuries. He is a hero.

“When he noticed the bomb, he locked the scumbag in the car. But took the brunt of the blast.”

Police announced the arrest of three men after a car exploded on Sunday morning local time.

Horrified witnesses reported hearing a “loud bang” and seeing “dark smoke” as the car went up in flames outside the hospital.

Dramatic pictures showed a car on fire in the carpark just inches from the main entrance.

The three men, aged 29, 26 and 21, were arrested in Liverpool’s Kensington district under the anti-terrorism laws, Greater Manchester Police said in a tweet.

The man killed in the blast has not yet been identified, the statement said.

Counter-terrorism police in the region were working closely with the Liverpool force, the statement added.

The attack occurred as the nation fell silent for Remembrance Day services across the country.

Merseyside police, who cover Liverpool, said in a separate statement that the blast had happened just before 11am local time, which is when the nation stops to remember those who served in the two World Wars and later conflicts.

“So far we understand that the car involved was a taxi which pulled up at the hospital shortly before the explosion occurred,” said the statement.

The North West Counter Terrorism Unit, leading the probe along with Merseyside cops, told reporters: “The passenger of the vehicle – a man – was declared dead at the scene and is yet to be formally identified.

“The driver – also a man – was injured at the scene and remains in hospital in a stable condition.

“We are keeping an open mind as to what has caused the explosion.

“We are working at a rapid pace to try and establish the circumstances behind this and will update in due course.”

On Twitter, Prime Minister Boris Johnson praised the emergency services for their work on the incident so far.

Priti Patel tweeted earlier that police were keeping her up to date on developments.

“Our police and emergency services are working hard to establish what happened and it is right they are given the time and space to do so,” she added.