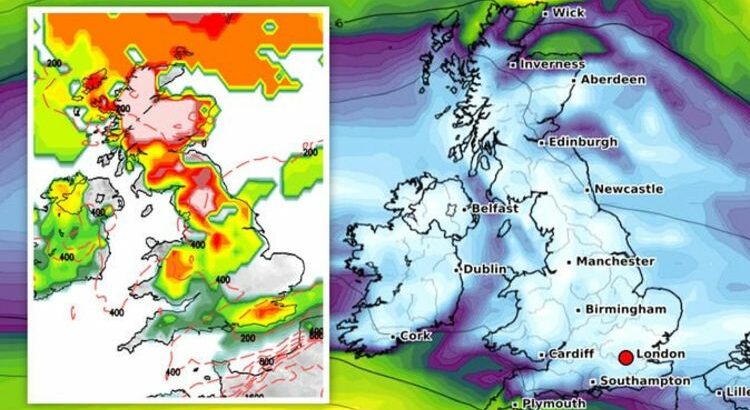 The UK is set to see lockdown restrictions eased from next week, with outdoor service being allowed at beer gardens and outdoor seating at restaurants for up to six people. But people should be prepared to wrap up warm while socialising outdoors as northerly winds are predicted to sweep wintry conditions over many regions of the UK throughout most of April.

Temperatures could also drop to bitterly cold lows as -3C hits Scotland on Wednesday, April 21, while northern parts of England also shiver at 0C on the same day, including Carlisle, Newcastle and Scarborough.

South eastern areas could be slightly warmer as London could see single figures of 8C and Southampton could reach 4C.

Latest snow probability maps at WXCHARTS on Saturday, April 24, even suggest there is between 10 to 30 percent chance of snow hitting.

Brian Gaze, a forecaster at Weather Outlook, warned of wintry conditions returning in northern regions towards the end of April, with spells of wet weather also arriving.

He said in his April forecast: “The first few days will be dry with daytime temperatures close to the seasonal average. 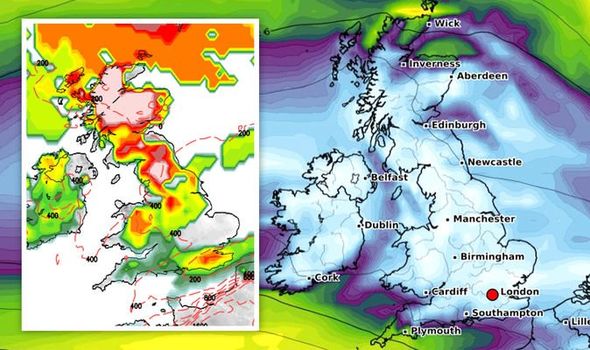 “Chilly nights lead to a risk of patchy frost. The second half of the week sees a big change as outbreaks of rain push southwards and much colder conditions follow.

“Showers become widespread and many of them fall as snow down to low levels. Accumulations are possible over high ground and perhaps to low levels in the north.

“A period of wet weather probably pushes southeastwards early in the period.

“In the north there is a risk of sleet or snow, but rain is more likely in southern and central regions. 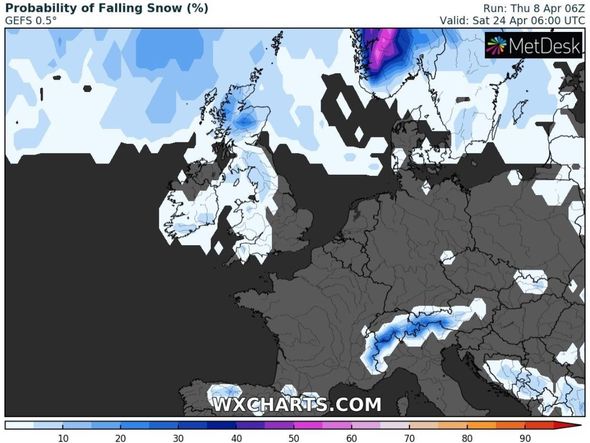 “Cold and showery conditions then return.

“The showers may be wintry for a time in all regions, but gradually they should become more scattered and increasingly fall as rain in the southern half of the UK.

The BBC’s forecast between Monday, April 19, and Sunday, May 2, added there could be brief warm spells later in the month, but low pressure would likely keep temperatures “cooler-than-normal”. 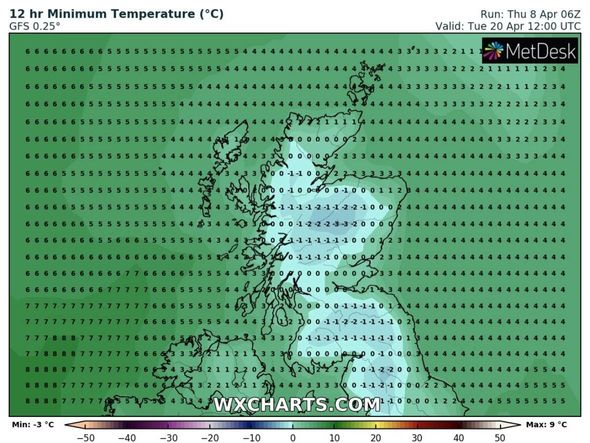 The forecast said: “Later in April, however, it looks like the high will be on the move, most likely drifting westwards into the Atlantic.

“This will also bring the return of low pressure systems and more unsettled weather by the end of April and into early May.

“There should be some warmer periods, but most likely only lasting two or three days, with very variable temperatures, and cooler-than-normal conditions otherwise.

“Confidence is low, though, with continuing disagreement between models and with statistical forecasts. 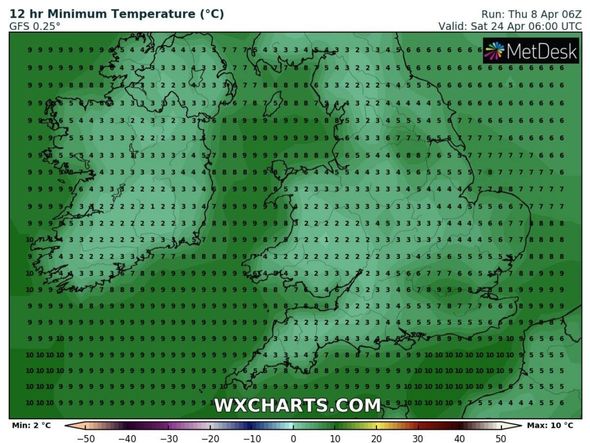 “An alternate scenario would be for high pressure to shift eastwards into mainland Europe rather than westwards, opening the door to Atlantic low pressure systems.

“These would bring much wetter and windier weather.”

The Met Office’s monthly forecast also predicted temperatures to remain “below average” as unsettled conditions linger until the last week of April.

The forecast said: “Changeable conditions are expected for most areas early in this period. 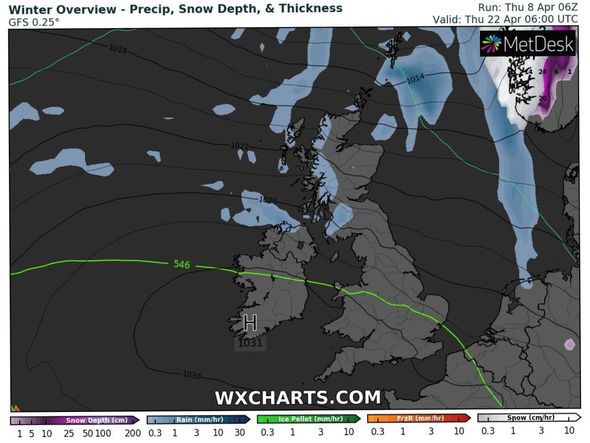 “A mixture of sunny spells and showers for most parts of the country.

“The west and northwest have the greatest chance of seeing any spells of more prolonged rain and stronger winds.

“Temperatures likely still below average at first, slowly recovering back to closer to average.

“Confidence becomes low in the prevailing weather patterns during mid-April. 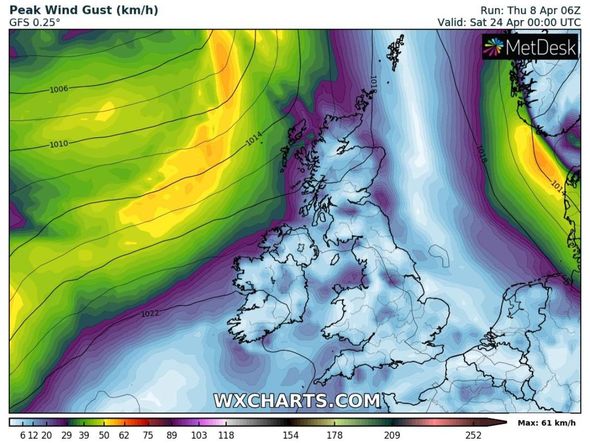 “There are most likely to be further spells of unsettled weather with some showers or longer spells of rain crossing all parts of the UK.

“This will be interspersed with drier and brighter interludes.

“Temperatures are expected to be at or slightly below average for this time of year by the end of the period.”

This weekend will see the Arctic blast return after a slight respite on Thursday.

Bitterly cold temperatures will be felt in the North, Scotland and Northern Ireland from Friday. Temperatures could drop as low as -7C in Scotland on Sunday, -6C in Wales and -4C in Cumbria.

Rain will fall on Friday and turn to sleet or snow as it passes south, according to forecaster Brian Gaze at Weather Outlook.

He said: “Sleet or snow showers may be widespread and heavy on Saturday in central and northern areas. In the south there could be longer spells of rain, sleet and snow.

“Sunday perhaps brings outbreaks of rain, sleet and snow to Scotland. Elsewhere showers fade away to leave dry conditions. There is the potential for sharp or even severe nighttime frosts.”