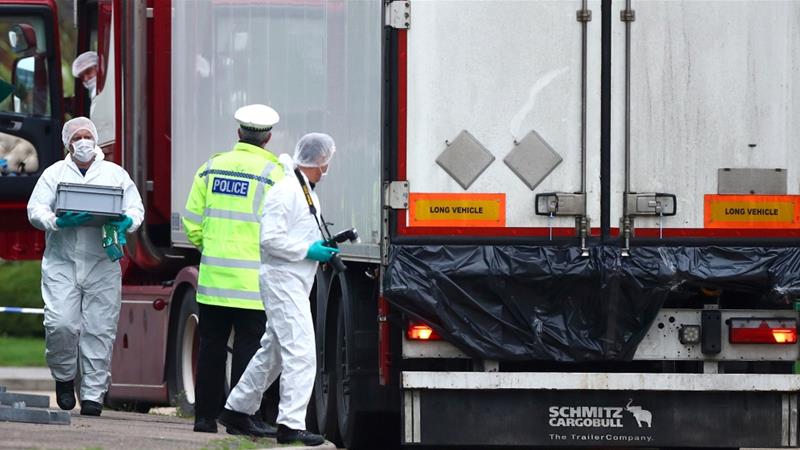 Ten teenagers were among the 39 Vietnamese found dead in a truck container in southeast England last month, local police said on Friday while relaying for the first time details of those who died.

The scope of the tragedy became clear as police released the names and ages of the victims in one of Britain’s worst incidents of people smuggling.

Two of the dead were only 15, while the oldest was 44. Some 20 came from one province – Nghe An in north-central Vietnam, about 200 kilometres (120 miles) south of Hanoi.

Police suggested they waited until the entire identification process was complete before releasing the information.

“Our priority has been to identify the victims, to preserve the dignity of those who have died and to support the victims’ friends and families,” said Assistant Chief Constable Tim Smith.

“It remained of paramount importance to us to ensure that an individual’s next of kin were informed and that they were given some time to absorb this tragic news before we publicly confirmed their loved one’s identity.”

The authorities worked with Vietnamese police and the coroner to identify the bodies found on October 23 in the back of a truck in an industrial park in the English town of Grays.

Police said last week that all the victims were Vietnamese citizens. DNA samples were taken from families in Vietnam who suspected their missing relatives had been on that truck.

Some of the names had emerged in news reports before, among them Pham Thi Tra My, a 26-year-old woman whose heartbreaking final text message to her mother vividly brought home the scale of the tragedy. Her family had been unable to contact her since the text arrived saying she was suffocating.

“I’m so sorry mom and dad…. My journey abroad doesn’t succeed,” she wrote. “Mom, I love you and dad very much. I’m dying because I can’t breathe …. Mom, I’m so sorry.”

The 31 men and eight women are believed to have paid people traffickers for their clandestine transit into England. British police have charged 25-year-old Maurice Robinson, from Northern Ireland, with 39 counts of manslaughter and conspiracy to traffic people. They say he drove the cab of the truck to Purfleet, England, where it picked up the container, which had arrived by ferry from Zeebrugge in Belgium.

In Ireland, 22-year-old Eamonn Harrison was arrested on a British warrant. Essex Police in the United Kingdom said they had started extradition proceedings to bring him to the UK to face charges of manslaughter. Several others have been arrested in Vietnam.

Families in Vietnam have set up altars with incense and photos of their loved ones, praying for their return.

The tragedy has also deeply affected the Vietnamese community in the UK, who gathered last week for a candlelight vigil at the Church of the Holy Name and Our Lady of the Sacred Heart in east London to mourn the dead.

Father Simon Thang Duc Nguyen, a Roman Catholic priest who organised the ceremony, said the community never thought such a great number of people could die in a single incident.