UK population hit 66million last year after immigration helped drive a 392,000 rise in numbers – but growth has slowed down since EU referendum

The UK population hit 66million last year after immigration helped drive a 392,000 rise in numbers, according to figures released today.

But growth has slowed down significantly since the EU referendum – with the 0.6 per cent increase the lowest since 2004.

The expansion in the 12 months to mid-2017 is roughly equivalent to adding a city the size of Coventry.

Some 41 per cent of the increase was down to the birth rate exceeding the death rate, the Office for National Statistics said. 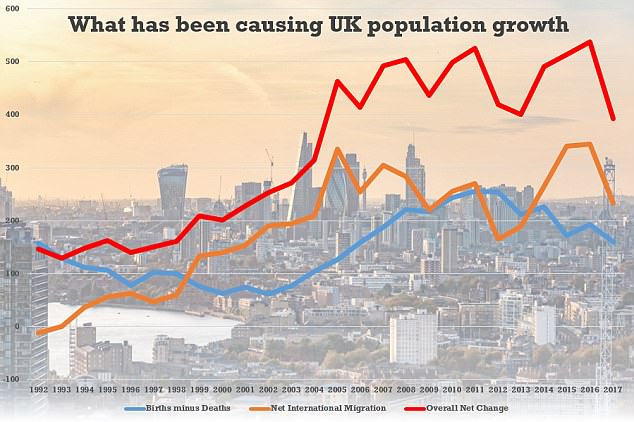 Immigration helped drive a 392,000 rise in numbers in the 12 months to mid-2017, according to official figures released today

The other 59 per cent was due to net international migration.

London saw the sharpest slowdown, with the increase slumping from 1.19 per cent in the previous year to 0.63 per cent.

The figures also set out the bulge in the age of the population as the Baby Boomer generation move into their later years.

How does the 392,00 UK population growth break down?

Neil Park of the ONS said: ‘This is the lowest annual population growth since 2004 due to a fall in net migration, fewer births and more deaths than previously seen.

‘The effect is most pronounced in London and other areas that have seen high levels of immigration in recent years.

‘Nevertheless, the population is still growing faster than at any time since the post-war ‘baby boom’ and the expansion of the EU in 2004.’

The arrivals were also offset by 342,000 who left the country.

In its report, the Office for National Statistics said the EU referendum was likely to be one of the key drivers slowing growth.

‘These changes suggest that Brexit is likely to be a factor in people’s decision to move to or from the UK – but decisions to migrate are complex and other factors are also going to be influencing the figures.’ 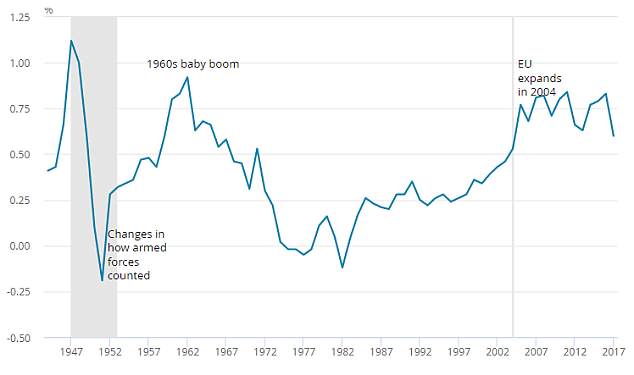 Population growth slowed down significantly after the EU referendum – with the 0.6 per cent increase in the 12 months to mid-2017 the lowest since 2004