British crews were deployed on the HMS Sabre after being alerted to the presence of the Infanta Cristina near the British oversees territory on Sunday. The UK Foreign Office has confirmed an “incursion” by the Spanish navy took place and it was “challenged” by British forces. A spokesman said: “We can confirm an incursion by the Spanish navy occurred yesterday.

“As with all incursions, the Royal Navy challenged the vessel. When challenged, the Spanish navy vessel left British Gibraltar territorial waters.

“Incursions are a violation of sovereignty, not a threat to it. We have no doubt about UK sovereignty over Gibraltar, including British Gibraltar territorial waters.”

The UK’s relationship continues to be strained amid fears from union leaders that contracts to build supply vessels for the Royal Navy could go to Spain. 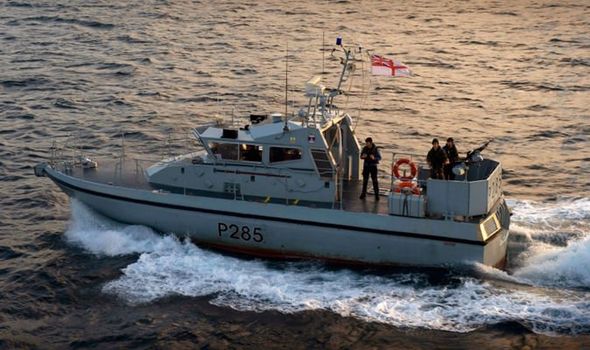 The GMB said industry sources were suggesting the £1 billion contract for Fleet Solid Support ships could go to the Navantia naval yard in northern Spain.

There are believed to be five bidders to build Royal Fleet Auxiliary vessels, with the Rosyth yard in Fife, Scotland, in line for work if Babcock wins the contract.

The GMB, which has over 600,000 members, also suggested that a decision to give the work to Spain could be linked to Brexit-related negotiations over the future of Gibraltar.

Tim Roache, general secretary of the GMB, said: “If the contracts for these ships go abroad, the Government is basically sticking two fingers up to shipbuilding communities and the entire manufacturing industry in the UK.

“No other government would outsource national security. If it is true this deal is being done because of ministers’ abject failure to sort out Brexit then it’s not just negligent, it’s grubby and reeks of self-preservation and putting party politics ahead of people’s livelihoods and communities.

“If this is what the Government is planning, it needs to think again.”

A Ministry of Defence spokesman said: “We are required by law to procure the Fleet Solid Support ships through open international competition. We issued formal tender documents to bidders, including a UK consortium, in late 2018.

“The final decision regarding the winning bid will be made in 2020.”