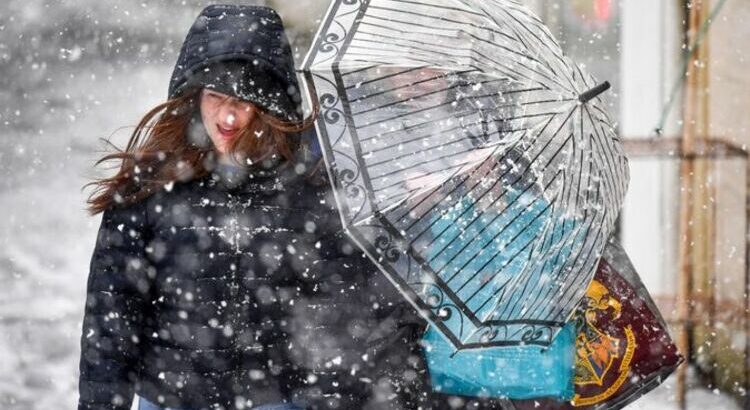 The UK is set for yellow wind and snow warnings just days after being bashed by Storm Franklin. The first warnings will affect parts of Scotland and Northern Ireland.

According to the Met Office, heavy snow showers will frequently take place between 1pm and 3pm on Thursday.

The UK’s national weather service added: “Temperatures across Scotland and Northern Ireland are expected to drop sharply following a squally band of rain on Wednesday, with frequent heavy and blustery snow showers arriving from the Atlantic.

“Away from immediate west-facing coasts, 2-5cm, and in places 7-10cm of snow is likely to build up even at low levels, whereas on higher ground some places could see 20-30 cm building up by Thursday morning.

“The showers will be accompanied by strong, blustery winds, with gusts of 50-60mph possible, and a small chance of 70mph on coasts.

“There is a very small chance that some of the showers could be accompanied by frequent lightning, which could impact power supplies.

“Snow showers are increasingly likely to turn back to rain and sleet at low levels later Thursday morning and early afternoon, although remaining as snow above 200-300m.”

The blizzard warning comes shortly after several stranded drivers in Leeds were rescued by good Samaritans after they got stuck in Otley.

Video footage shows four men working together to push a stranded vehicle along the road.

WXCHARTS has warned minimum temperatures could dip to as low as -2C tomorrow.

A further plunge is forecast to take place on Friday when parts of Scotland could see mercury dip to -6C.

However, this warning is only for wind.

It will be in place from 6am today until 3pm tomorrow.

The Met Office said: “Winds over parts of south east Scotland and north east England will increase early Wednesday with gusts of 40 to 50mph expected widely, and very locally as high as 60 mph.

“This is likely to lead to some travel disruption before winds ease from the north during the afternoon.”