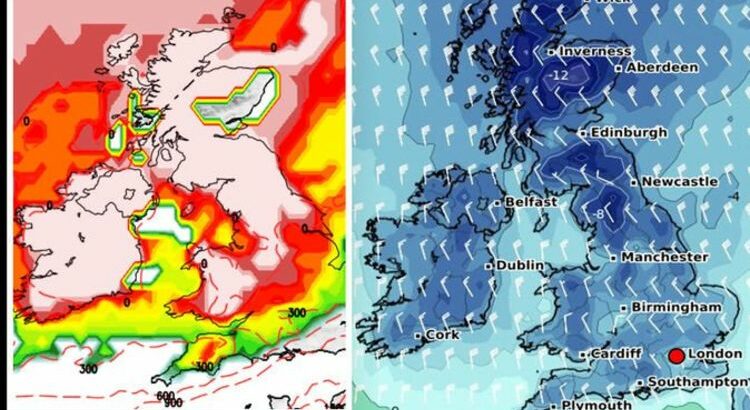 BBC Weather: UK set for drop in temperature and rain

Northerly winds are predicted to head over to the UK over the coming Easter Weekend, with cold conditions potentially striking over a three day period (72 hours). On Sunday, charts from Netweather show much of Scotland covered in shades of white, suggesting a 100 percent chance of snow. Then, on Monday, even more of the UK is hit with shades of white and pale pink, including the whole of Scotland and as far south in England as Birmingham, in the Midlands.

This suggests there is between 90 to 100 percent chance of snow hitting.

Southeast England is covered with shades of green, yellow and red, which could mean areas such as Kent and London could see between 40 to 80 percent chance of snow on the same day.

On Tuesday, the maps show parts of Scotland and Wales covered by white shades once again, while later on Tuesday parts of the south of the UK turn green to suggest a 30 percent chance of snow.

Jo Farrow, a forecaster at Net Weather, warned of “two significant cold fronts” sweeping over the UK from the Arctic during the weekend. 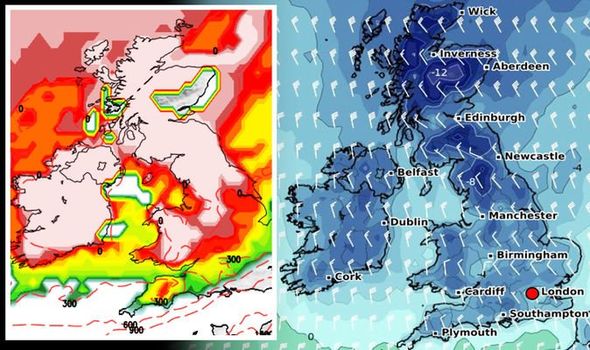 She said: “There are two significant cold fronts in the next few days. One has already made its presence felt over Scotland and Northern Ireland already.

“Temperatures in the north of Scotland barely reached 7C yesterday with more cloud and a nippy wind.

“It has been cooler overnight and there is a lot of low cloud and murk over eastern Britain now which has sneaked in from the North Sea.

“This will bring a change to colder air today for much of the UK, although taking its time to reach SW England where temperatures will still be into the high teens, maybe just low 20sC. 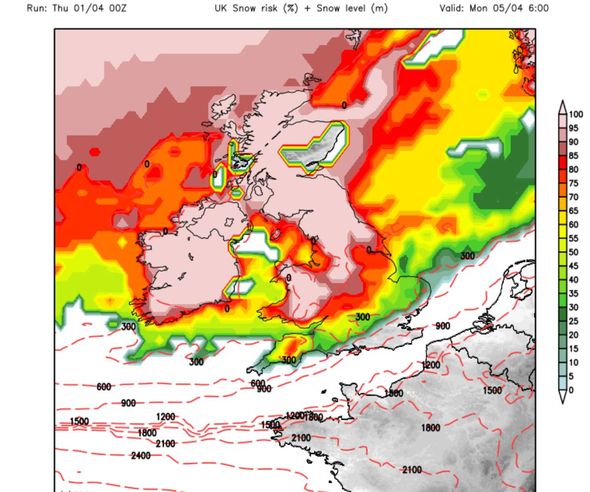 “Then plenty of dry weather but feeling cooler, nothing like the warmth there has been before a dramatic change through Easter Sunday as an active cold front sweeps down from the north and opens up a bitter Arctic flow with widespread frost and snow for some.

“It will be cold Sunday night, Monday and Tuesday, feeling bitter in the wind with a hard frost, ice and wintry showers, including snow for some.

“Settling snow will be mostly for northern hills, particularly the far north of mainland Scotland (NW Highland and Grampians), even to lower levels and also northern counties of Northern Ireland.”

Temperatures could also plunge to a freezing -7C in Scotland and -2C in much of north-east England on Monday as the wintry air spreads, charts suggest. 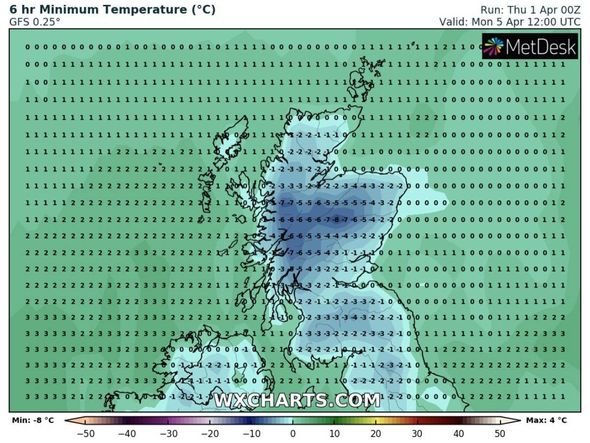 Further down England, Stoke and Manchester could hit single figures of 2C, while London and Essex can expect lows of 0C.

Mr Madge said: “Friday should mark a rather malign start to Easter, with colder conditions for large swathes of the country as part of an Arctic plunge.

“Temperatures will be dragged down quite a bit from the day before, with wintry showers expected in Scotland and the most northern regions in England.” 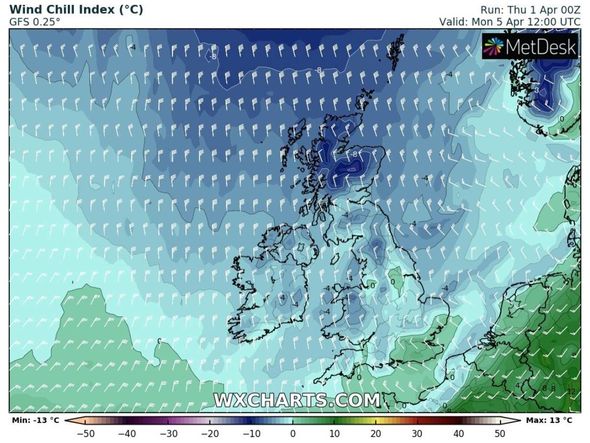 Brian Gaze, a forecaster at Weather Outlook, added snow is likely to strike on Monday, with southern regions also at risk.

He said: “During the morning of Bank Holiday Monday outbreaks of rain clear southwards and they could turn to sleet or wet snow on their back edge.

“Much colder conditions follow and wintry showers could become heavy in all regions.

“Even in southern Britain snow is a possibility.” 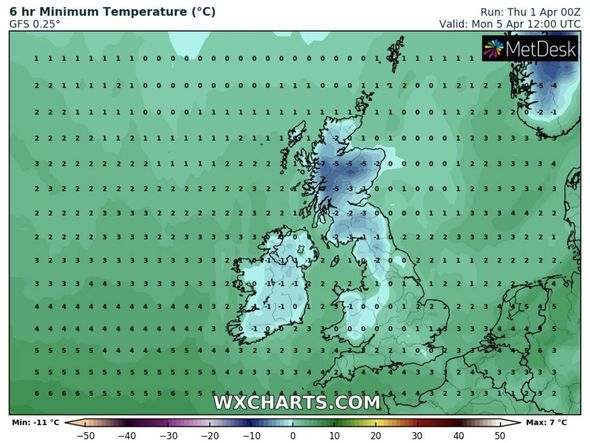 BBC Weather’s long-range forecast between Wednesday, March 31 and Sunday, April 4 also said a cold strong from could arrive from the Arctic.

The forecast said: “Heading into the Easter holiday weekend, the weather will likely be a few degrees colder than the average for the time of year but largely dry with patchy cloud at first.

“From Sunday and into next week the weather may turn much more unsettled, with a stronger cold front arriving from the north bringing polar air from the Arctic.

“This may only reach Scotland by Sunday with some uncertainty on the exact timing.” 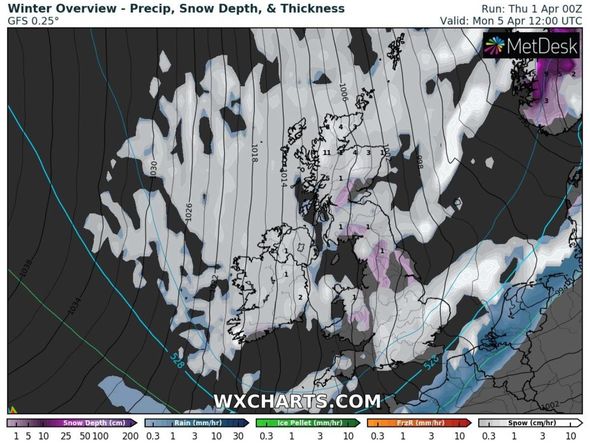 It comes after parts of the UK saw temperatures hit almost 24C (75.2F) on Wednesday.

Weybourne, in north Norfolk, scorched after temperatures reached a peak of 23.9C (75F).

The figure just missed beating the nation’s hottest ever March temperature of 25.6C (78F), which was recorded in 1968 at Mepal in Cambridgeshire.