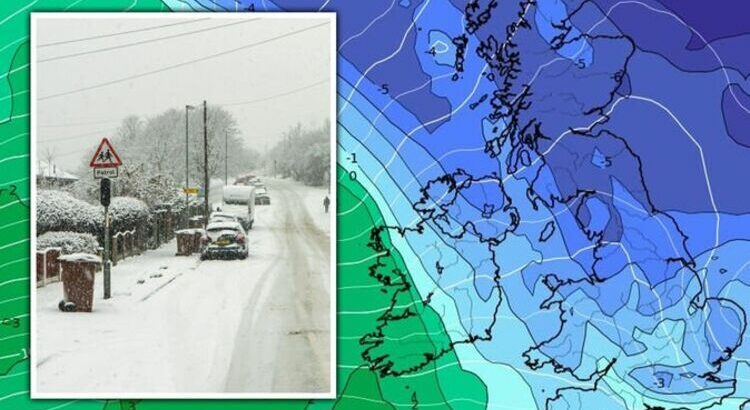 Following the double storms, forecasters say the weekend will continue the trend of wet and windy weather for much of Britain, with snow in some areas where the temperature drops. Maps and charts say up to eight inches will fall in some areas, while winds continue to batter Britons with 50mph gusts.

Maps from WXCharts hold that Saturday, while milder than Friday due to Eunice weakening, still sees rain and winds throughout the day.

As of 3pm on Friday, snow that moved westwards over the north England will feature over Leeds and Manchester, with 7cm an hour falling to the west of Leeds.

More snow returns over the north east by 9pm, with areas north of Manchester seeing 6cm an hour while the west of Scotland is buffeted by 17cm an hour.

Temperatures are expected to stay near zero for the rest of Saturday, with the north of England seeing lows of -1C by 9pm while Scotland freezes in -5C near Aberdeen.

Overnight, there will be 3cm of snow settled on the ground in Greater Manchester, while Fort William sees 21cm of snow on the ground, equal to 8.3 inches.

Moving into Sunday, much of Briton soaks in downpours of rain, with the northern areas affected by snow the day before seeing up to 3mm an hour by midday.

Snow will buffet much of Scotland overnight, with 18cm an hour in Fort William and 6cm an hour in Glasgow before turning to rain by 6am.

At midnight on Sunday, wind gusts are expected to reach nearly 50mph along the west coast of Britain, while Northern Ireland sees the same gusts over the whole country.

By midday, the UK will see a return to strong winds with around 45mph to 50mph gusts over the whole country, with the exception of Fort William and west coastal areas, which see a milder wind speed close to 25mph.

The Met Office has issued a yellow weather warning for snow in the north of England, lasting from 11am to 3pm.

The warning covers much of Leeds and York, as well as outer areas of Greater Manchester, Stoke-on-Trent and Sheffield.

It said: “Rain may turn to heavy snow in a few places later this morning and early this afternoon.

“This is most likely on roads above 200 metres elevation, such as across the Peak District, but also a lower likelihood to some lower elevations in Yorkshire.

“Some places could see 2-4 cm of slushy snow which could build up quite quickly, before conditions ease from the west this afternoon.”

Nick Finnis, Senior Forecaster for Netweather.tv, wrote for the agency’s website snow and winds will feature throughout the weekend.

He said: “A swathe of heavy rain, hill snow and strong winds gusting to 30-50mph is moving in across N. Ireland, NW England, Wales and SW England this morning and will then spread across much of northern England, Midlands, southern England and East Anglia later this morning and through early afternoon, clearing eastern England mid to late afternoon.

“Some hill snow is likely across hills of northern Wales and northern England, so possible for some disruption over higher routes for a time.

“A short spell of strong winds will accompany the passage of the squall rain moving east across southern areas, a Met Office yellow warning for wind has been issued for south Wales, coastal SW England and areas towards the English Channel further east – for gusts of 40-50 mph inland, 60 mph along coasts.

“Also, a warning for snow over high ground of northern England has been issued and is in force between 11am and 3pm this afternoon.”

“Sunny spells and a few showers will follow the rain clearing east across England and Wales. Scotland will be mostly fine, dry and sunny, cloud and rain moving in across N. Ireland and far west of Scotland by evening after a mostly dry and bright day.

“A north-south contrast in temperatures, only 4-7C for Midlands and north Wales northwards, but a milder 10-12C for southern England and south Wales.

“The next Atlantic frontal system will spread strengthening winds and rain in across Scotland, N. Ireland, northern England and Wales tonight, falling as snow over high ground of Scotland for a time.

“Southern England and East staying mostly dry, though some rain possible towards the north of these areas later in the night.”