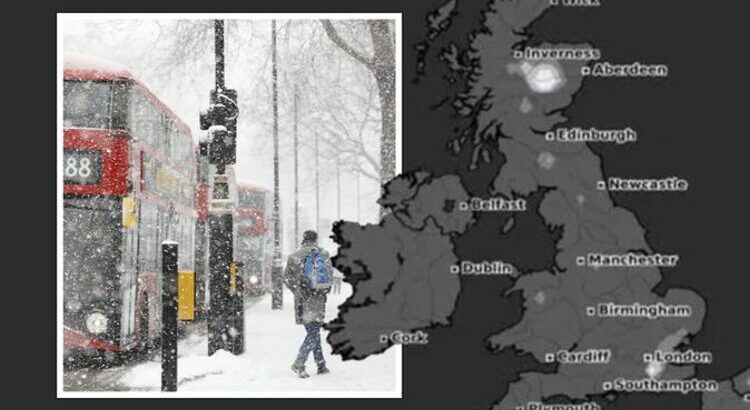 From Sunday 20 March, snow will start to fall across Wales, focusing on the northwest for the first part of the day. This will then spread further south, seeing between two and three centimetres of snow build up.

Heading into Monday, this number shoots up as the majority of Wales will be powdered with snow.

Forecasts show that most of the country will see between five and six centimetres of snow.

By Wednesday evening, the wintry conditions will be felt across the UK, with the one to three-centimetre estimate for the east of Scotland morphing into four by the time you reach the border with England.

This almost doubles to seven centimetres of snow on that Wednesday night for the area around Newcastle.

Heading into early Thursday morning, the snow will descend towards the north-west of England, hammering the area around the Yorkshire Dales with up to 12 centimetres of snow.

Towards the end of the day, this drops off to around half this figure, as the patches of snow in the northwest of England and north of Wales linger at around 3 centimetres in depth.

But towards the end of the last weekend in March, it’s the south-east of England that will be touched with snow.

From Sunday 27 March, the counties around London will see snow depth of between one and five centimetres.

Patches of snow will fall across Essex and dotted around the rest of the country.

Kent will also see a flurry of snowfall on Mother’s Day.

In the meantime, most of the country will see bright spurts of sun throughout this weekend, with a moderate breeze and highs of 12C in the capital.

The same is true throughout most of the UK, with sunny intervals but the presence of a strong breeze in Manchester and on the north-east coast.

Whilst temperatures are expected to peak at 11C in Manchester, they will climb to 13 for those near Hull on Saturday afternoon.

The picture is similar in Cardiff, just without the pleasant moments of sun breaking through more dense cloud.

And the picture is drearier in Scotland over the weekend, with showers forecast across much of the country with highs of 10C.

As for Sunday, BBC Weather predicts rain across the north-east of England throughout the morning, that will disappear as the day goes on.

Sunday afternoon will be largely bright and dry, with the west of the UK more at risk of wind and showers.