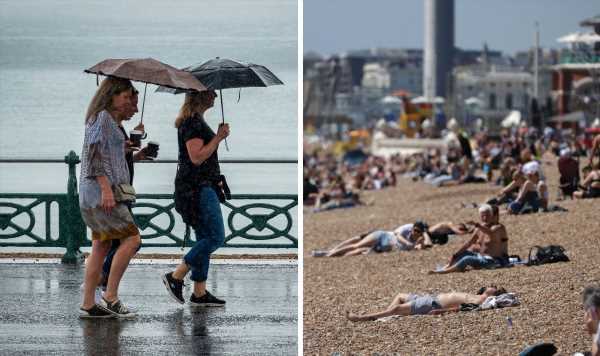 Brits will be treated to sizzling temperatures at the end of this week, with a hot European plume predicted to cover most of the country by Friday (June 17). Some places will be recording temperatures of up to 31C, such as London, and many inland towns in the south east. The short burst of hot weather will be brought to a dramatic end on Sunday as thunder and rain will come pelting down – bringing cooler temperatures in its wake. And, in a dismal update for some, while more drier weather can be expected, as can more rainfall and strong winds before the start of July.

The Met Office said: “Into the beginning of next week the chance of rain in the northwest persists, but perhaps alongside some slightly warmer conditions than the weekend.

“Tending to become drier overall in the latter part of this period, though occasional spells of rain or showers are still possible, mainly in the northwest.

“A small risk of thundery outbreaks for the south.”

But it’s not all bad news, as the Met Office did not rule out the chance of some warm spells creeping back in before mid-July.

While there is a glimmer of hope, it is not yet known how hot temperatures will become if the overall picture for the UK improves.

Looking into the last week of June and into the first fortnight of July, higher pressure and a northwesterly wind flow are likely to persist, the forecaster added.

The forecast said: “This will continue to bring generally unsettled and showery weather for most, with possible thundery outbreaks in the south.

“Temperatures are most likely to be near or slightly below average, but with some warm spells still possible.”

As for this coming weekend, the heat will be very uncomfortable for some with little breeze and humid conditions lasting overnight.

The mercury will hover around the high teens and early 20s, specifically overnight on Friday.

Dan Rudman, Met Office deputy chief meteorologist, said: “Temperatures will rise through the week, becoming well above-average by day by Friday when many parts of the southern half of the UK are likely to reach 30C or even 33C in isolated spots.

“This is the first spell of hot weather this year and it is still unusual for temperature to exceed these values in June.

“Many areas will also see some warm nights with temperatures expected to be in the mid to high teens overnight.”

Agostinho Sousa, head of extreme events and health protection at the UK Health Security Agency, added: ‘‘With temperatures forecast to reach 30C in some parts of the south on Friday we want everyone to enjoy the hot weather safely when it arrives and be aware of good health advice for coping with warmer conditions.

“During periods of hot weather it is especially important to keep checking on those who are most vulnerable, such as older people and those with heart or lung conditions.

“Make sure to look out for signs of heat exhaustion and follow our simple health advice to beat the heat.”