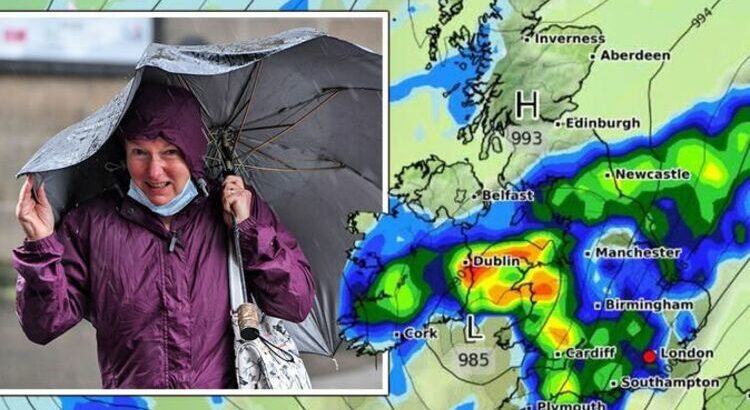 Met Office forecasters have outlined an “active jet stream will drive a series of low-pressure systems across the country” that will result in a weekend washout for tens of millions of Britons. A jetstream barrelling in from the Atlantic will lie across the UK, with total wind strengths of 115mph. Two low-pressure systems will batter Britain over the weekend, with the third following during the middle of next week.

The first of this trio of low-pressure systems will hit the north of the UK as soon as Friday evening, sparking a band of heavy rain – particularly throughout western areas – on Saturday.

WXCARTS weather maps show 31mm of rain smashing into a region of central and eastern Scotland at around 3pm on Saturday, with up to 16mm falling in northern England later that evening.

The Met Office warned the strongest winds will be through the Irish Sea, with the coast of north west England and north west Wales being hit by gusts of up to 50mph.

A second low-pressure system will move northeastwards from southern to northeast England through the day and evening on Sunday, bringing yet more torrential rain for much of England and Wales.

The Met Office has issued a yellow warning of rain for Wales between midnight and 6pm on Sunday, drenching 12 regions and local authorities in the process.

Around 40-60mm of rain is widely expected over the weekend, although some regions could be drowned in 100mm or more.

On Sunday the strongest of the winds will be through the English Channel, with guts of up to 55mph for a period along southern coasts.

Met Office senior operational meteorologist Annie Shuttleworth told Express.co.uk: “Over the weekend the jetstream will lie across the UK with wind strengths of 100KT (115mph).

“Two low pressures over the weekend and a 3rd mid-week next week.

“We will see one large low-pressure move to the north of the UK tonight, dragging rain bearing fronts across the UK, particularly western areas on Saturday.

“A second smaller low pressure will move north eastwards from southern to north east England through Sunday day and night.

“This will bring more heavy rain for much of England and Wales.

“Western areas are expected to see the highest rainfall totals with some spots of Wales seeing around 100mm over the course of the weekend.

“This has led to a yellow rain warning being issued for central areas of Wales.

“Somewhat cooler and drier early next week but a further low pressure on Wednesday could bring more widespread disruptive strong winds and heavy rain across the UK.”

Brian Gaze from The Weather Outlook warned a “conveyor belt of low-pressure systems will be racing in from the Atlantic” over the weekend.

He is forecasting severe gales or even storm force winds could batter the north, possibly reaching close to 90mph in Scotland.

Mr Gaze told Express.co.uk: “A conveyor belt of low-pressure systems will be racing in from the Atlantic and although it is too early to be confident about the day to day details it is likely to become very wet and windy at times.

“Gales will probably be widespread and there is the risk of severe gales or even storm force winds at times in the north.

“Some computer model runs are showing potentially damaging gusts of close to 90mph in Scotland.

“However, with the weather coming off the Atlantic temperatures will often be close to or above the mid February norm in the south.

“The north will probably be colder at times and that brings the risk of hill snow.”