The outlook countrywide shows mainly dry conditions on Thursday with the beginning of the weekend bringing the unsettled weather back. NetWeather.TV forecaster Nick Finnis said: “Thursday will bring a window of mostly dry and bright conditions, before rain and stronger winds returns Friday morning.

“The weekend continuing the unsettled theme, with low pressure in charge, bringing windy conditions, spells of rain or showers.

“But, with winds from the southwest for the most part, it will be mild for all.”

From Thursday to Saturday, the Met Office forecasts a “dry, bright start”, followed by a “generally unsettled” and windy period of weather.

The Met Office said “bands of rain” will cross the UK, and there will be some brighter, showery intervals. 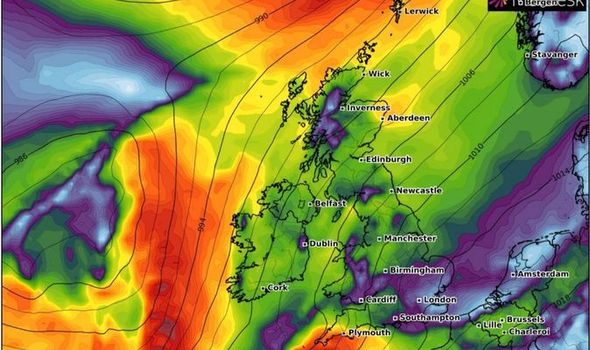 The end of the week will bring more mild conditions overall.

He said: “It will be wet and windy at times, but it is also likely to stay largely mild. 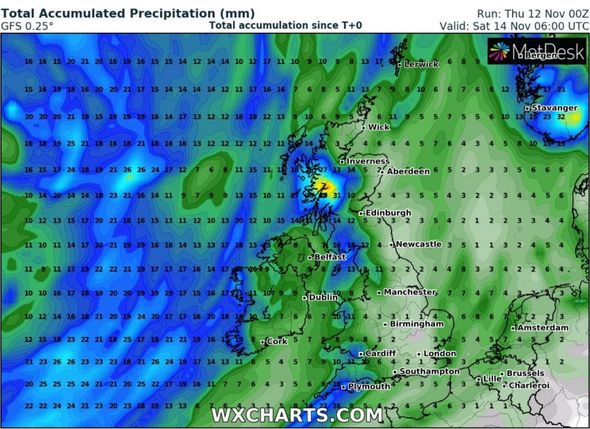 The Met Office’s weather forecast starting next Monday until November 25 warned of the possibility of unsettled conditions in parts of Britain, with some strong winds and gales also possible.

It read: “During this period unsettled conditions are likely in the northwest, bringing spells of rain and wind, perhaps strong winds and gales at times.

“More settled conditions may establish in the southeast and later into central areas where it will be mainly dry and sometimes bright.

“Temperatures look to be mild and at times very mild at first with a reduced risk of night frosts. 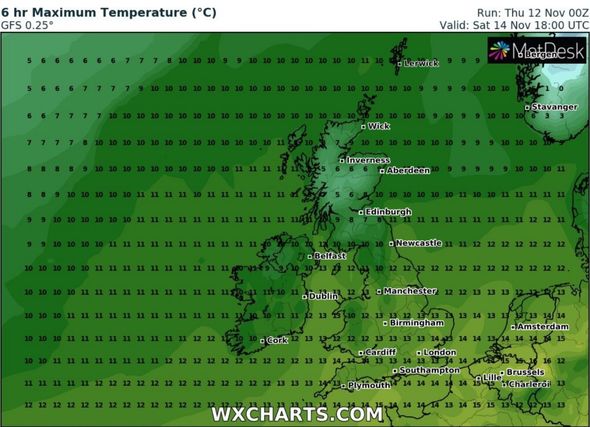 “There is a chance that drier brighter conditions may extend UK-wide for a time, where fog patches could prove persistent in places.

“Although uncertain, later during this period temperatures look to turn cooler, closer to the seasonal average with an increased risk of overnight frosts especially in central and south-eastern areas.”

The rest of November and into the first week of December, the UK will see overall settled conditions with central and south-eastern regions experiencing them for longer.

But the national weather service warned some unsettled periods are still likely. 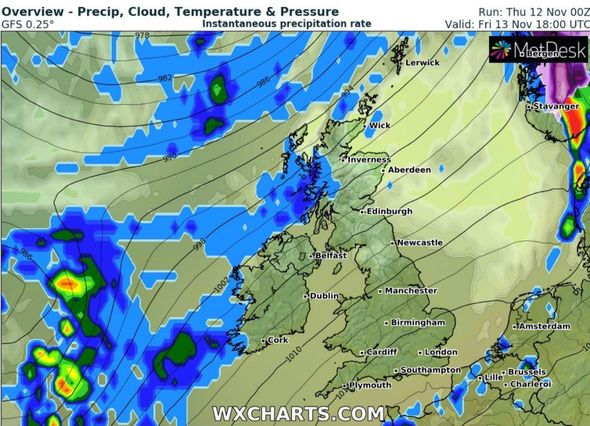 The forecast read: “The end of November is likely to be generally settled with high pressure set to dominate, with settled conditions expected to be more prolonged in central and south-eastern areas.

“However, occasional unsettled periods do remain possible, although likely to be short-lived and mostly affecting north-western areas of the UK.

“Temperatures are probably remaining around average at first, feeling mild, before possibly turning colder than average into December with increased risk of overnight frosts.

“The chance of wintry precipitation could also be increasing into December, notably for northern higher ground.”