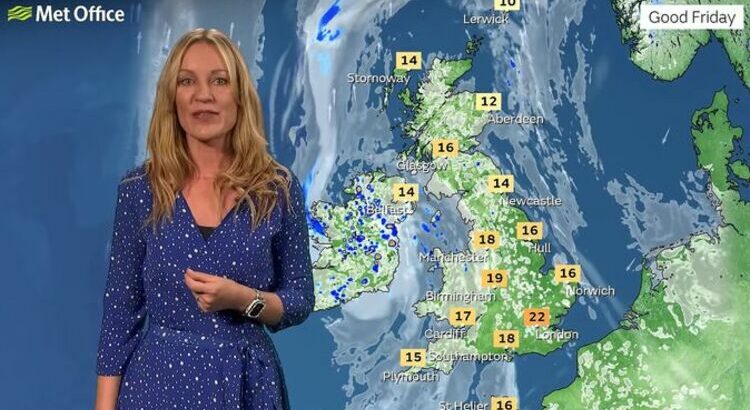 A warm southerly airflow over the UK will bring mild weather for most of the weekend, with temperatures peaking on Good Friday. On Good Friday it will be cloudy in the north and the west of the country with outbreaks of rain and drizzle that will ease later on.

Elsewhere it is likely to be brighter with temperatures hitting a peak of 22C.

Easter Saturday will see a mixture of clear and sunny spells with cloudier areas and some showers.

Showers will be most likely in central and western areas earlier in the day but could develop elsewhere at times.

There will be mist and fog patches inland at first and more extensive areas of low cloud and fog around some coasts will suppress temperatures a bit in those places, particularly in the east.

Elsewhere it is likely to feel warm, especially in any sunshine, but perhaps slightly cooler than Friday.

Easter Sunday is likely to be similar, although it will be drier than Saturday, with showers confined mainly to the north and west.

Sunday evening is likely to see the arrival of more persistent rain arriving in the evening from the west, which will signal a change to unsettled, cooler weather from Monday.

Neil Armstrong, Chief Meteorologist at The Met Office said that “most” people will experience fine weather over the Easter weekend.

He said: “Most people will see some spells of decent bank holiday weather this weekend, and it will feel warm in places, particularly for the first half of the Easter break.

“However, a low-pressure system will affect the northwest of the UK later Sunday, bringing unsettled weather to the north with some strong winds and rain in the northwest, which could impact driving conditions for some, but further south it will be drier, especially in the southeast.

“There will be varying amounts of cloud, but temperatures are widely likely to be above average for the time of year, although low cloud might keep temperatures lower in coastal areas.

“However, where the sun comes out people can expect some very pleasant spring conditions.”

Looking further ahead Tuesday is likely to see more rain and showers at times, particularly in the south along with cloudy weather.