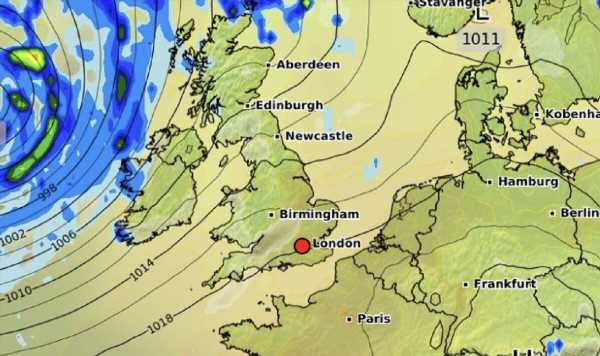 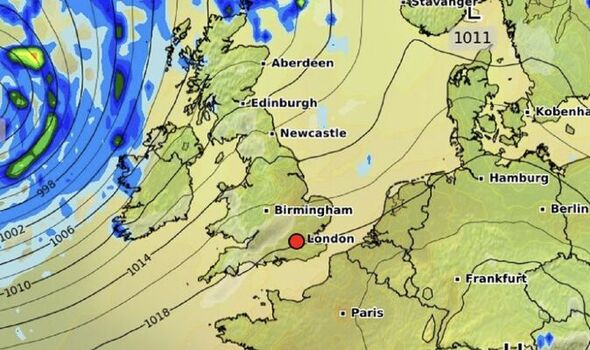 A ‘battle’ between low pressure to the west and high pressure to the east this week will steer squabbling weather fronts around the UK. Volatile warm air which fuelled weekend downpours will continue sweeping into Britain from the Continent.

Western Britain is facing the worst of the rain while the east stands more chance of dodging the deluge.

“The jet stream will be in a more amplified position, and this means that weather patterns are more slow moving.

“As we go through the week, we are likely to have a southerly flow of air which means temperatures will be around or above average, across eastern areas lots of dry and fine weather with a greater risk of rain in western areas.”

It comes after the nation celebrated the Queen’s Platinum Jubilee in largely unbroken sunshine.

An unstable plume of air from France unleashed a torrent of thundery downpours during the final celebrations.

The Continent will persist in thrusting volatile air plumes into Britain rocketing temperatures and stoking a simmering storm risk.

The Met Office issued an alert for rain across eastern regions last night and into the early hours of today.

It warned more than an inch of thundery rain could trigger localised floods, travel disruption and power cuts.

A spokesman for the Tamworth region said: “Please avoid using low lying footpaths and bridges near local watercourses and plan driving routes to avoid low lying roads near rivers, which may be flooded.”

Long-range forecasters predict further stormy downpours through the start of June as the jet stream continues to wrestle the weather.

Jim Dale, meteorologist for British Weather Services, said: “Beyond the Jubilee weekend it settles down, but we are then waiting for the next thing, and that will come out of the west.

“The jet stream looks like moving slightly southwards, and this will allow fronts to move in in from the Atlantic bringing more in the way of storm activity.

“Overall, it will remain changeable because we will remain at the mercy of the jet stream.”

The chaotic forecasts have bookies switching between an early summer scorcher and June washout.

Coral is offering 6-4 from 2-1 on the wettest June on record while Ladbrokes has 6-4 from 2-1 for record heat.

Coral spokesman John Hill said: “Although the weather is unlikely to dampen Platinum Jubilee celebrations, it could be a sign of what we have to come this month. We have slashed the odds on June ending as the wettest since records began.”

Ladbrokes’ Alex Apati added: “It’s looking increasingly likely that this month plays host to the hottest June ever, if the latest odds are anything to go by.”

Netweather warned that with heavy and thundery downpours, the Atlantic will hurl the odd gale this way.

“It willl also be quite windy with some strong or gale-force gusts across Northern Ireland, the far West, and the North and West of Scotland at times.”