The Met Office has forecasted wet weather for the weekend with patches of sunny spells as the temperature starts to warm up for the May heatwave. Met Office Meteorologist Ellie Creed explained the wet weather is set to stay for some parts of the country this weekend although temperatures are expected to increase everywhere into the high teens. She said: “We can see plenty of showers across the bulk of England and Wales and these could be really quite sharp at times.

“Heavy downpours possible and maybe the odd rumble of thunder mixed in.

“A slice of dry weather for southern Scotland and northeast England but further north to Scotland and Northern Ireland showers are likely.

“Through this evening there is a risk of rain scurrying across the far south of the country for a time.

“It will tend to clear away and elsewhere the showers will gradually ease through the night and we will though see some of those showers continue across some central parts and in the northeast.” 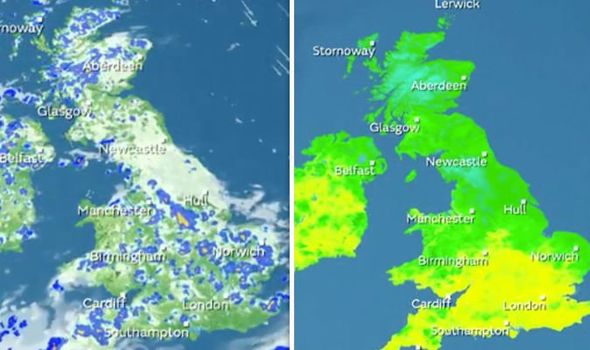 The Met Office’s Alex Deakin also explained the wet weather expected over the weekend despite temperature set to rise and cause a heatwave next week.

He said: “We should also start tomorrow with some sunshine over Northern Ireland Wales and southwest England.

“A lot of cloud for eastern Scotland and the eastern side of England.

“There will be some lighter showers in the morning but as we go through Saturday we will see some heavy showers developing over the Midlands, northern England and Scotland.

“Not many showers at all for southwest England Wales and Northern Ireland so some decent spells of sunshine here on Saturday.

Despite the wet weather expected on Saturday and parts of Sunday, temperatures are still expected to increase in time for next week.

BBC Weather has forecasted Europe temperatures to increase as the UK prepares to bask in warmer weather as early as next week.

Nations across Europe can also expect similar heatwave level temperatures as the May heatwave could see peak temperatures by the end of next week.

Temperatures could hit the low 20Cs next week and increase further although clear, cloudless skies will bring some chilly nights.