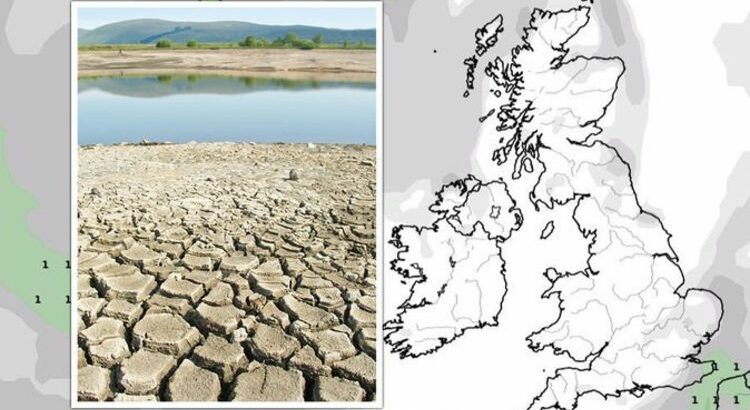 Britain is currently stuck under what meteorologists call an Omega Block, meaning that no weather fronts can get through from the Atlantic. This brings in a lot of high pressure that leads to settled and tranquil weather with temperatures rising slightly above average. With the temperatures predicted to stay at around 23C, 24C in some parts of the country for the next few weeks, the public should brace itself for the so-called Indian summer. On top of that, the latest weather charts from the Weather Outlook have shown that the heat could reach 30C at the beginning of next month.

The Met Office defines the term Indian summer as “a warm, calm spell of weather that occurs in autumn”.

While Britain is set to enjoy the high temperatures, they could have a negative impact on the country.

After a period of endless rain earlier this summer, the UK is now struggling with the lack of it, according to Jim Dale, a senior forecaster at British Weather.

“Looking ahead towards the next couple of weeks we can expect roughly what we’ve had for the last week or so.

“Essentially the high pressure sitting on top, everything moving underneath or going over the top towards Norway, that’s the frontal systems.

“So we will stay in this. Stuff can’t get through, which is why we are where we are now.”

He added:” This time of year you’ve got longer nights, you get a little bit of mist in the morning and colder nights, but during day time once you get rid of the stubborn cloud, which can be a problem and has been a problem for some, then you end up in a late summer’s warmth.

“And we’ve got plenty of them to come, not sure the cloud is necessarily going to stick around too much, but this next fortnight I don’t see a break to be frank.

“It will continue well into mid-September.”

The forecaster added that, while it is difficult to say what the exact impact of the drought will be, it could cause a number of problems, particularly in the farming industry.

Mr Dale also claimed the temperatures the UK is experiencing now are slightly above average in some parts of the country.

He said: “Scotland has had a bit of the bigger biscuit of late, seeing some of the better temperatures.

“That can be the case especially if you get sunshine, and they get a little bit more sunshine up in Scotland than you do on the South coast of England at this time of year.”

Mr Dale continued: “Temperatures, certainly, heading towards 20C and above that as we go into the next few days, so the Bank Holiday weekend will be a little bit warmer.

“And more so as you unravel the following week so 23C, 24C in the London area and I think in general most people will see between 18-22C in the next seven to 10 days.

The forecast from the Met Office for the period between September 1 and September 10 echoes Mr Dale’s comments saying that the high pressure will remain above the country during that time.

The Met Office said: “High pressure is likely to hang on at first bringing a continuation of largely fine and dry weather.

“The centre of the high is likely to remain to the northwest of the UK.

“To start, this period will likely see the best of any sunshine in the west or northwest with more cloud in the east and the chance of a very isolated slight shower along North Sea Coasts.“