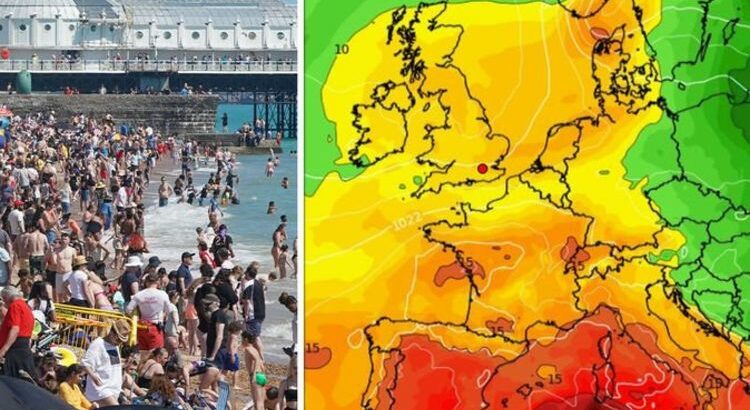 A band of hot weather across Europe is expected to hit the UK by the weekend, with charts forecasting a high of 23C (73F) on August 24. The highest of the temperatures will be located in the south of England with multiple areas of the south coast seeing the temperatures range between 22-23C. London and parts of the South-East will see the mercury hover around 21C (69.8F) due to the high pressure charts.

In the North and Midlands, the mercury will see temperatures ranging between 17-20C on Saturday afternoon.

However, Liverpool may see a high of 21C as Britons are given a late blast of sunshine.

The band of hot weather is expected to arrive in the UK on September 1 according to the graphs from WX Charts.

On September 2, the graph shows temperatures rising to a high of 22C in the North-West.

Commenting on the weather between Thursday to Sunday, the BBC reported the North of England will see dry spells.

They said: “Through the day, sunshine will develop from the north, and by the evening many across the UK will see a mixture of patchy cloud and sunny spells.

“Friday will start cloudy but sunny spells are expected to develop in the afternoon for northwestern and southern areas.”

According to WX Charts, these warm early autumn temperatures will remain until September 8.

Next Wednesday, the forecaster has predicted the mercury will rise to 23C for large parts of the South-East of England.

The North-East will also see higher temperatures although, in Wales, the mercury will hover around 16C (60.8F).

Due to these hot temperatures, WX Charts is predicting the mercury will rise to 4C (39F) above what is normally expected on Saturday in its temperature anomaly charts.

Indeed, the same graphs show temperatures approaching 6C (42F) what is normally expected in parts of Scotland on August 31.

Later in the month, the BBC has predicted cooler weather returning to the country as the UK progressed into autumn.

They forecast between September 13 to 26: “Low pressure is expected to be the main driving force in the weather throughout the month of September, with only brief deviations at times.

“Computer models have been showing consistent signals for this to be the main pattern.

“Our historical analogues, where we examine previous years since 1950 which saw similar large-scale weather patterns to this year for comparison, are also in agreement, so overall, confidence is high to medium that we will see low pressure more consistently.

“This means a wetter, often cooler than normal second half of the month with a chance for some stronger weather fronts or storms around mid-September.

“Later in the month, there are some encouraging signs that high pressure may build in Russia, which would lead to some slow-moving fronts over the UK.”