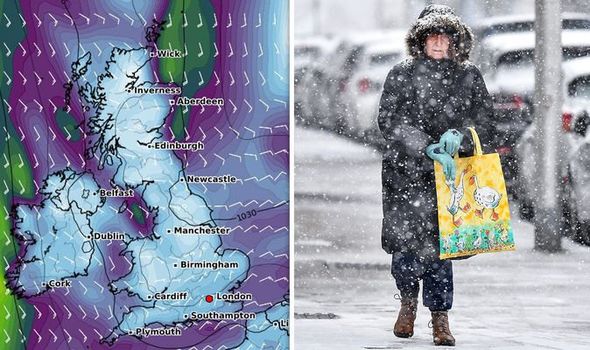 The mercury is set to plummet low enough to bring some “wintry showers” on Saturday. The lion’s share of the snow will affect East Anglia and the south-east. However it will not be heavy enough to settle or be widespread throughout the nation.

Commenting on Thursday morning’s conditions, Met Office meteorologist Aidan McGivern said: “Temperatures a degree or two either side of freezing to begin the day, perhaps a bit colder in the countryside.

“But despite the frosty start plenty of sunshine for virtually everyone.”

The north of Scotland could experience some “sharp” showers but elsewhere will remain largely dry, the Met Office forecaster explained.

He said: “A case of feeling warm in the sunshine but feeling cold in that wind. 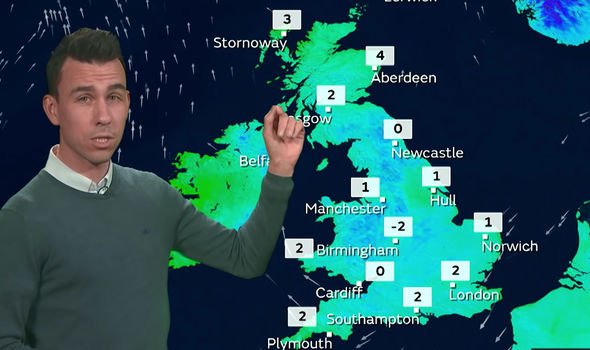 “And it is increasingly brisk wind around southeastern coasts.

“Through Thursday night we are going to see clear skies forming again.

“Perhaps a bit of patchy cloud floating here and there and wherever that lands we are likely to avoid a frost but otherwise it is another chilly start to Friday with temperatures again close too if not a little below freezing.”

There will be “little change” in conditions as Britons head towards the end of working the week, according to the latest Met Office forecast. 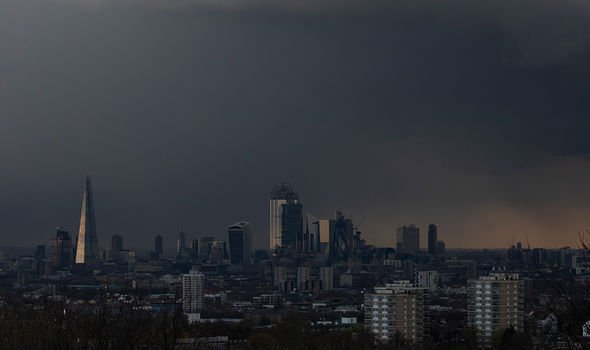 Mr McGivern said: “High pressure there over Scandinavia that cold easterly wind continues across all parts of the UK but particularly noticeable on that North Sea coast.”

There will be a “few showers” on Friday but “not many”, said Mr McGivern.

The weather expert cautioned there would be the “odd downpour in eastern Scotland and in the south-east as well”.

He also warned of “wintry showers” on Saturday, saying: “I’m not talking about widespread snow, not even settling, it is just the odd hail shower and sleet shower perhaps some snow over some of the lumps and bumps.”

For most Saturday will be a “dry and bright spring day” Mr McGivern forecasted.