Temperatures in the UK will continue to get hotter as the week goes on culminating in the mid-20s on Good Friday with the heatwave continuing through the Easter weekend. Met Office weather forecaster Aiden McGivern explained that although Thursday may start misty and slightly chilly, temperatures will quickly soar to the twenties. He added that it will continue to get hotter as we move towards Saturday.

He began by saying: “Today marks the first day for many of us of the warm spell that is expected to stick around into the Easter weekend.

“Sunny for the majority and certainly feeling warmer away from the east coast.

“As we started Wednesday the latest weather front brought some cloud cover, some fog as well and a few bits of rain.

“But the rain is now fizzling out and the cloud breaking up and widely we will see sunny skies developing up and down the country. 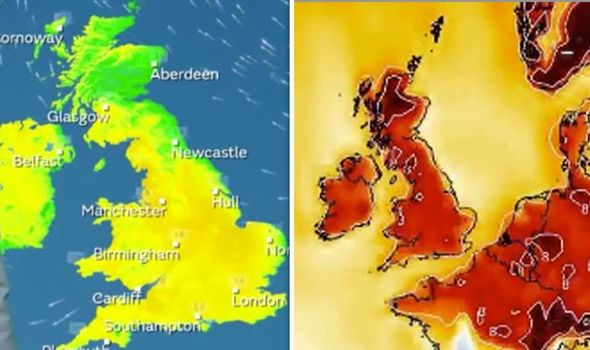 “For the majority, it is just dry and it is increasingly sunny and certainly feeling much warmer compared to recent days.”

Thursday morning is expected to start misty and cloudy in some areas with temperatures all in the single digits.

The Met office Meteorologist went on to explain that Thursday’s temperatures would exceed Wednesday’s highs of 17 and 18 degrees Celsius .

Mr McGivern continued: “Temperatures will be up a degree or two on Thursday as well with it being widely low twenties across parts of England and Wales.

“There could be 19 or 20 degrees Celsius across parts of northern and western Scotland.”

“Good Friday starts off with plenty of sunshine, again a few pockets of chilly air but generally frost free.

“There will be some high cloud floating around and so the sunshine may appear hazy especially across Scotland and Northern Ireland.

“But for the vast majority Good Friday is looking like another sunny day and those temperatures continue to see day by day rise.”

She said: “As we start the day on Thursday there will be some mist and fog to get rid of first but when that lifts we’re looking at a dry day and sunny day.

“Then for Good Friday a dry day and a sunny day. With lengthy sunny spells.”