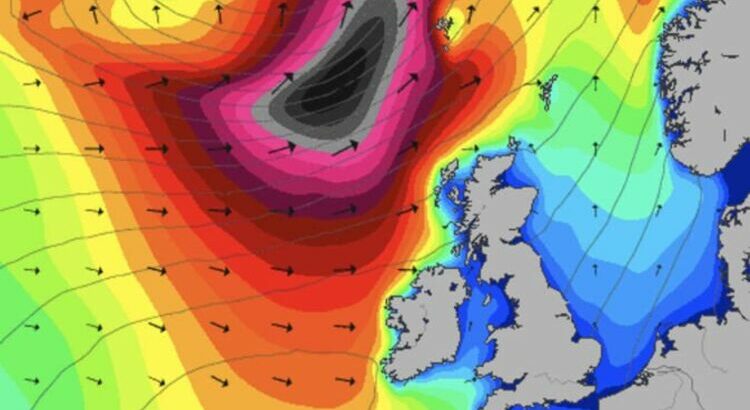 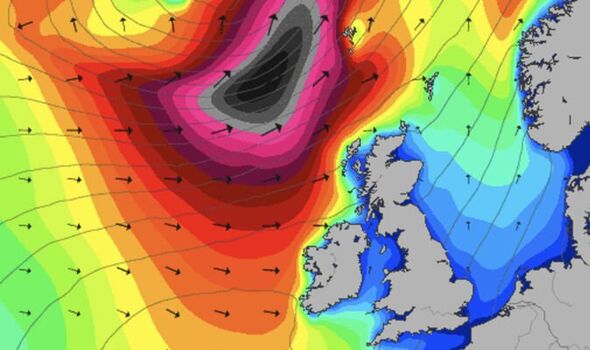 A rapidly deepening storm skirting north Scotland and Ireland over the next 24 hours will trail a 3,000-mile weather front laden with rain across the UK.

Low-pressure will arrive armed with a ‘sting jet’ as wielded by killer Storm Eunice earlier this month, according to Severe Weather Europe’s Marco Korosek.

He said: “Its rapid intensification hints that it is a classic bomb cyclone with pressure falls of significant levels.

“Through Monday afternoon, a re-intensification of the front should bring heavy rain across Wales and southwestern England, spreading into central England into the early night hours.”

The storm, heading towards Norway, will veer far enough from the UK to avoid widespread damage setting its sights instead on Iceland, Ireland and western Scotland.

It will mature through today before hurtling off towards southern Iceland and the Arctic Circle.

However, its tail will drag a band of rain across parts of Britain putting coastal regions still knee-deep in floodwater back on flood alert.

Mr Korosec added: “It will be a major producer of significant waves, partly spreading towards Ireland, Northern Ireland, western Scotland.”

The storm is in part being driven by a powerful Polar Vortex – a dome of freezing air which spins high over the North Pole.

UK meteorologists warn a possible warming of the stratosphere this month could drive a shift in the Polar Vortex.

This was in part the driver of the 2018 Beast from the East which dumped mountains of snow over Britain.

While similar, the current trend of warming is not expected to impact the UK’s weather in a similar way.

“Though not a major sudden stratospheric warming, looks sufficient to displace/split vortex temporarily.”

The Environment Agency still has seven flood alerts and two more serious flood warnings in force after weeks of storms left parts of the country knee-deep in flood water.

South-western regions around the River Severn are most at risk where government officials have warned people to ‘act now’.

UK meteorologists warn the UK risks further bouts of stormy weather through the start of spring thanks to intense low-pressure activity in the Atlantic.

Heavy rain through the next day or so will arrive on a huge trailing weather front attached to the Icelandic bomb cyclone.

Jim Dale, meteorologist for British Weather Services, said: “The frontal system coming from the centre of this low is 3,000 miles long.

“There will be some heavy rain particularly for the south-west, Wales and the Midlands.

“This system will affect the UK into Tuesday morning.

“Winter is not over, and when the transition of season happens, with cold and warmer bodies of air starting to mix, we see these bouts of changeable weather.”

Northwestern parts of the UK will be at risk of wintry showers which could be heavy in parts, a spokesman said.

He added: “Rain will become more widespread across much of England and Wales, heavy in some western areas.

“Rain will ease and sink into south-eastern areas tonight.

“The northwest will still see scattered showers which could perhaps be heavy and wintry.”

Britain’s chaotic weather has kept bookies on their toes who have now slashed the odds on a March mega-freeze.

As temperatures nosedive, Coral is offering 2-1 on next month shivering its way into the record books.

Spokesman Harry Aitkenhead said: “We are headed for a freezing March and it’s going to be a spring to wrap up warm in the UK.

“We have slashed the odds on next month going into the record books as the coldest third month of the year ever recorded.”

Weather models reveal parts of Scotland at risk of snow through the coming days.