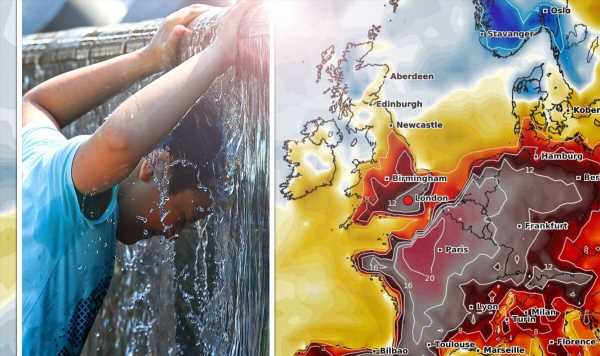 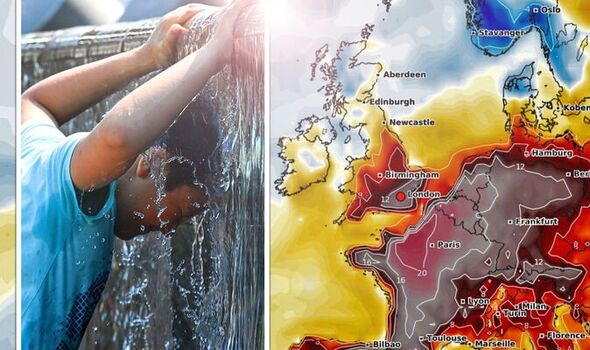 Britons are urged to watch over the elderly and vulnerable as government officials issue warnings to take action. Thermometers will hit 30C today before rising steadily as Britain simmers under a tropical ‘heat dome’.

A ‘nudge in the right direction’ could topple the 38.7C UK record recorded in Cambridge, in July 2019, as some models predict 43C–more than 20C higher than average.

However, this is thought to be an exaggerated prediction, with highs more likely instead of 35C or just above.

Exacta Weather forecaster James Madden said: “It is possible that temperatures could push past the 35C-mark in parts of the country, and all this would take would be a small nudge in the right direction.

“It is going to be very hot for a sustained period of time as Britain gets ready for a major heatwave.”

High pressure will stretch into Britain from the Atlantic Azores Islands, off the coast of Portugal. The so-called Azores High will trap a bubble of rapidly warming air like a pressure cooker.

Jim Dale, meteorologist for British Weather Services, and author of Weather Or Not? said: “It is unlikely that we will hit 40C-plus, and this is more likely to be an ‘outlier’ prediction which can sometimes happen when computer models produce 20 or 30 outcomes.

“It will, though, be very hot this week.” 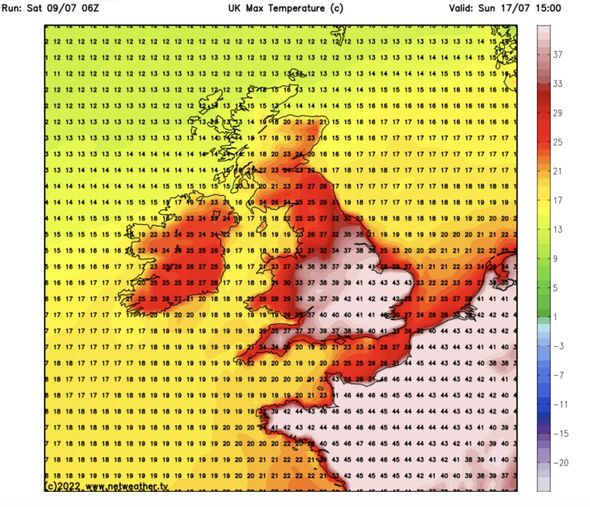 Government forecasters are warning ‘extreme heat’ will build as warm air is compressed under blazing July sunshine. Met Office meteorologist Alex Deakin said: “There is the possibility of some extreme heat at the back end of the week.

“Temperatures will pick up on Sunday and into Monday, and we are likely to see values in parts of eastern England of 30C.

“High pressure compresses the air which will be squashed down, and this will lift temperatures.”

Mr Dale said: “It is going to turn increasingly hotter through the end of the weekend and in the run up to the middle of next week.

“We could see 30C on Sunday, but the peak will be during the middle of the week when temperatures could hit the mid-30Cs.

“This is the effect of the Azores High which is acting like a dome keeping hot air inside and not allowing it to move away.

“It is a bit like a pressure cooker, and under this lid the air will be turning warmer and warmer through to the middle of July.” 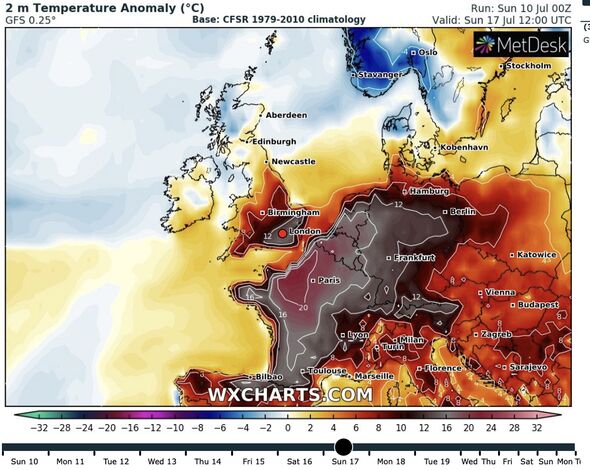 Drivers have been urged to take extra care on roads which could soften as surface temperatures hit 40C-plus. RAC spokesman Rod Dennis said: “You can pretty much guarantee that the road temperature will be significantly hotter than the air temperature, especially where the sun is out.

“The heat can lead to some softening of road surfaces–blacker patches of tarmac is the tell-take sign.”

Government health officials have urged elderly and vulnerable people to take extra care during the peak of the hot weather.

The Met Office with UK Health Security Agency (UKHSA) have issued a level-3 heat health watch alert through next week across southeast England.

A separate level-2 ‘alert and readiness’ caution is in place across much of the rest of the country. A Met Office spokesman said: “There is increased confidence that temperatures will rise through the weekend, becoming widely hot, locally very hot from Monday.

“The highest confidence is for south-eastern and eastern areas where temperatures are expected to reach the low 30Cs.

“Look out for others, especially older people, young children and babies and those with underlying health conditions.”