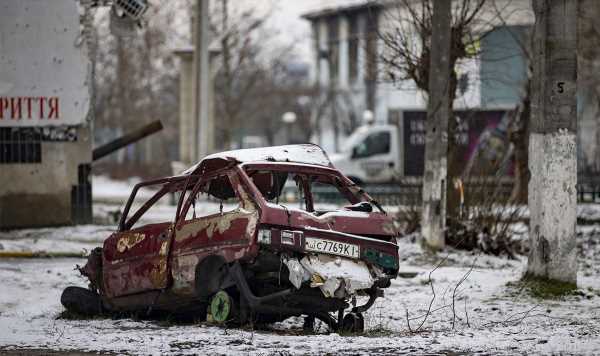 She said: “I can tell you right now morale is very high. I just travelled throughout the country and I have talked to many people.

“It’s very hard right now, without electricity, without running water in many places, without proper heating. However, Putin really did not think it through when he thought that it will break us to break the basic level of comfort.”

Temperatures in Kyiv are now firmly below zero as winter sets in. A difficult time for many even without shelling and no water or heating, the Ukrainian population remains resilient.

However, this is not to say the war has not taken a toll or had an impact on the mental health of the population.

Discussing the impact on population and in her own life, Ms Rudik told the Express of her personal mental health experiences: “Right now there are so many people we know who already have these issues. I can tell you my personal story.

“I spent the first three months here at home under the bombardment in Kyiv and I have gone to the bomb shelter with my family a bazillion times.

“But then there was one day when I travelled to Warsaw for the first time and I was jogging in the morning and there was an ambulance passing by at 6am and I didn’t realise what happened, but in a second I was on the ground with my hands covering my head and I was just like ‘What happened?’

“I did not have any control of it, I did not understand what happened. It was already somewhere so deep inside, this instinct of self-preservation, and this is when I was thinking that I’m sure I will go through it, and it will go away.”

Ms Rudyk’s story is not an unusual one. It is inevitable that after close to year of shelling and fighting that nerves will be frayed.

However, things have been even worse for those occupied by Russian forces, forces which have committed unspeakable levels of atrocities in places like Bucha, where 458 civilians were killed alone.

Ms Rudyk visited Bucha and described her experience upon visiting the now infamous site: “We went to Bucha and Irpin on the first day of liberation. For many reasons one of them was to get the help for people.

“Also we knew that at some point Russia will be saying it was all made up and nothing happened and we wanted to say that we will be the witnesses and that when there will be a tribunal we will be at the tribunal saying I have seen that.

“And I am still shocked of those things that I have seen. It was probably the best and the worst decision in my life.”

In response to witnessing the aftermath in Bucha, Ms Rudyk has taken action, saying: “I have a team of psychologists working in Bucha right now with women who suffered sexual violence. There is story about a woman who said, ‘I’m not victim of sexual violence, but I was taken to be executed twice and I was not executed.’”

Bucha, sadly, has not been a one off, and evidence of similar Russian atrocities have been found in sites across Ukraine. As with almost everything in this conflict, the first in Europe since the days of the ‘blitz spirit’, it is the scale which for many is hard to fathom.

So too are the mental health implications. This conflict isn’t just continental, its generational. Everyone young and old has been affected says Ms Rudyk: “We have children who know how to act during air raid sirens, who have seen dead bodies, who had to become are refugees.”

Going into 2023, the ground underneath the foundations of Ukraine, Buka, Kherson, may be frozen, but what remains certain is that as this war continues, it will continue to shift.

But the determination of the Ukrainian people fight on is unlikely to move an inch.