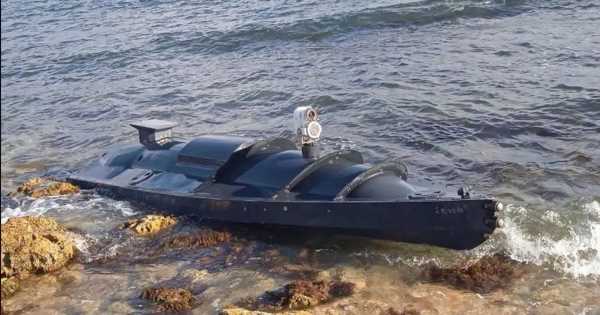 Ukrainian forces are thought to be using 'suicide drones' in their ongoing war with Russia after a mysterious boat-like object washed up on the shores of Omega Bay.

Vladimir Putin's Black Sea Fleet are currently occupying the territory in the Ukrainian region of Sevastopol, which Russia are using as their naval base. But Russia were left facing a confusing conundrum after encountering the strange vessel when it appeared to suffer a mechanical failure.

The drone looks to have evaded enemy lines without harm, though a submarine expert believes its actual purpose is to be used as a weapon against Russia by avoiding detection and blowing up opposing ships.

READ MORE: Russians treated Brit POW 'like a dog' and asked if he wanted 'beautiful death'

H.I Sutton writes in Naval News, as reported by The Sun, that the "curved shaping, with external reinforcing, suggests a warhead", explaining further that "a theory is that this device is designed to ram another vessel and detonate, like a modern interpretation of an explosive boat.”

The vessel is thought to be able to get up to speeds of 46mph, whilst carrying cameras and explosive detonators. “This also explains the cluster of sensors at the bow," Sutton adds.

He goes on to explain how the drone would likely be powered by a single on-board motor. “This suggests relatively high performance, it is made for speed,” he added.

“And such a small vessel, about the size of a kayak, would likely have a very small radar signature.”

Ukraine have already shown a determination to target Russia's naval base after aerial drones were deployed on Sevastopol last month. Now a report on The Drive suggests their approach on water could be part of a surveillance operation which inadvertently led to the drone ending up in Russian hands.

That could be just as frustrating to US officials as it is to Ukrainians, as the drones are thought to have been included in a support package from the Pentagon to aid the battle against Putin's Russia.

"It's an unmanned surface vessel that can be used for a variety of purposes in coastal defence,” said Pentagon spokesman John Kirby when news of the support package was announced. "I think I'll just leave it at that."