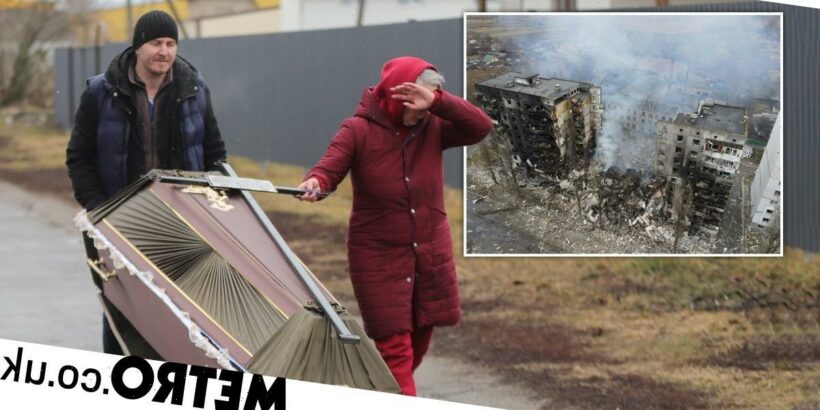 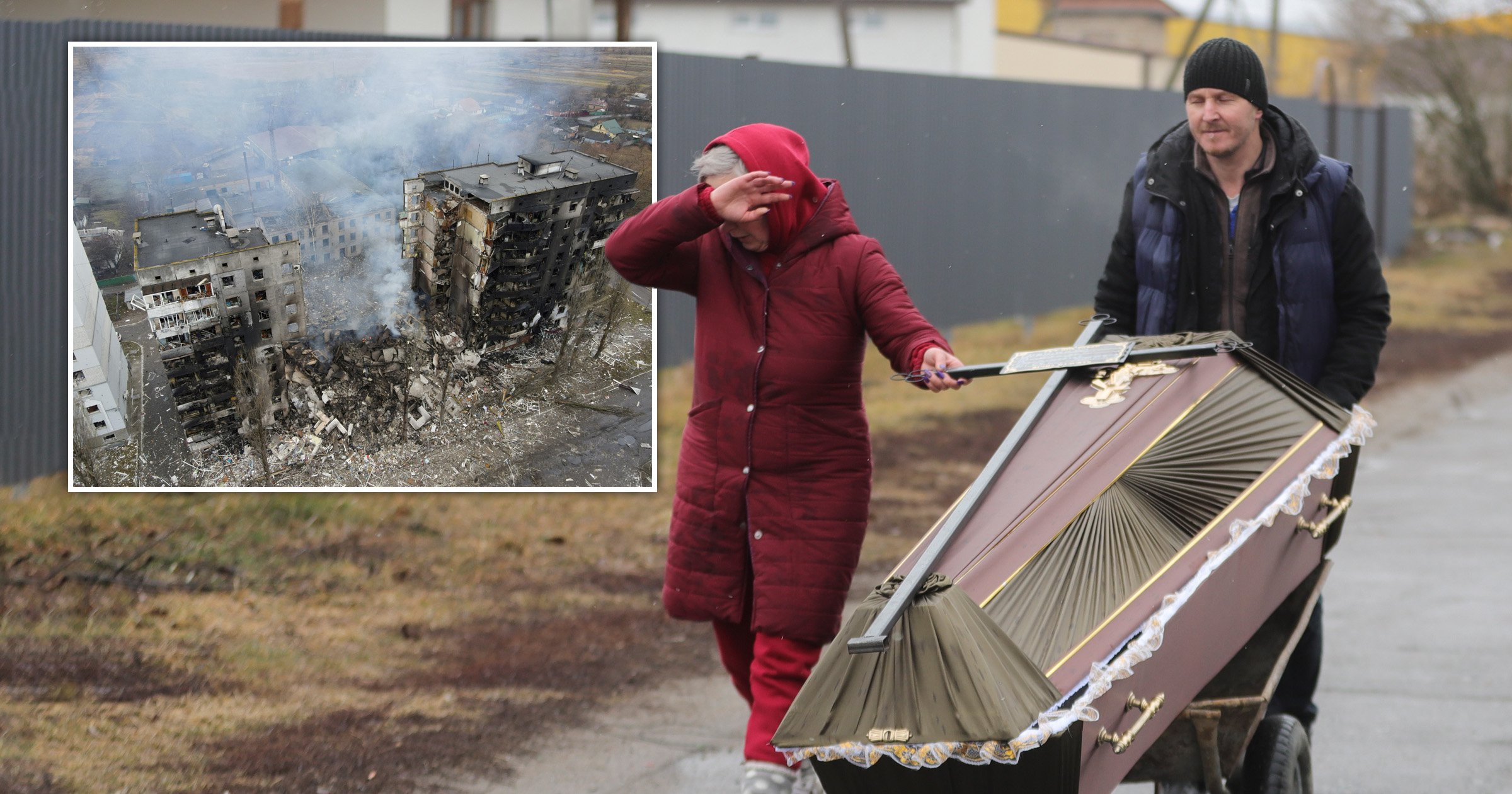 Ukraine fears that the scenes in Bucha which have horrified the world may just be ‘the tip of the iceberg’.

President Volodymyr Zelensky, who is set to address the United Nations later today, fears that other settlements have faced even worse treatment from Vladimir Putin’s forces.

He named the town of Borodyanka as one where ‘the number of casualties’ may be ‘much higher’.

It comes after global outrage at images from Bucha, showing civilian bodies littering the streets. Many victims had their hands bound behind their backs, suggesting they had been executed.

There are widespread accusations of war crimes and rape of Ukrainian women and girls by Russian soldiers.

But now there is growing unease about what else may be uncovered in newly liberated areas following Russia’s partial retreat from some parts of Ukraine.

President Zelensky, who has visited Bucha, said: ‘This is only one town. One of many Ukrainian communities which the Russian forces managed to capture.’

Referring to a town 16 miles west of Bucha, he continued: ‘Now, there is information that in Borodyanka and some other liberated Ukrainian towns, the number of casualties of the occupiers may be even much higher.’

Ukrainian foreign affairs minister Dmytro Kuleba is also warning that Russian forces have committed worse horrors than those witnessed in Bucha, with others raising concerns about Brovary.

Speaking at a joint press conference in Warsaw, Poland, alongside Foreign Secretary Liz Truss, Mr Kuleba said: ‘What you have seen, the horrors that we have seen in Bucha are just the tip of the iceberg of all the crimes that have been committed by the Russian army in the territory of Ukraine so far.

‘And I can tell you without exaggeration but with great sorrow that the situation in Mariupol is much worse, compared to what we have seen in Bucha and other cities, towns and villages nearby Kyiv.’

Yet Russia continues to insist that allegations of atrocities have been fabricated by Ukraine.

Putin’s Foreign Minister, Sergei Lavrov, dismissed the scenes from outside Kyiv as a ‘stage-managed anti-Russian provocation.’

Satellite images analysed by the New York Times in fact suggest dead bodies have been in the streets since long before the Russian soldiers retreated from Bucha.

Western leaders appear to have given up on believing Russian claims about the war.

The United States and Europe were planning new sanctions on Tuesday to punish Moscow over the civilian killings.

US President Joe Biden called for a war crimes trial against Putin, with the USA set to ask the UN General Assembly to suspend Russia from the Human Rights Council.

German Chancellor Olaf Scholz claimed on Monday that Putin and his supporters would ‘feel the consequences’ of events in Bucha and that Western allies would agree further sanctions against Moscow in the coming days.

Russia says the launch of its ‘special military operation’ in Ukraine on February 24 aimed to demilitarise and ‘denazify’ Ukraine.

But the war has not gone to plan and the retreat of its forces appears to have uncovered atrocities which could leave the Russian economy almost entirely isolated. 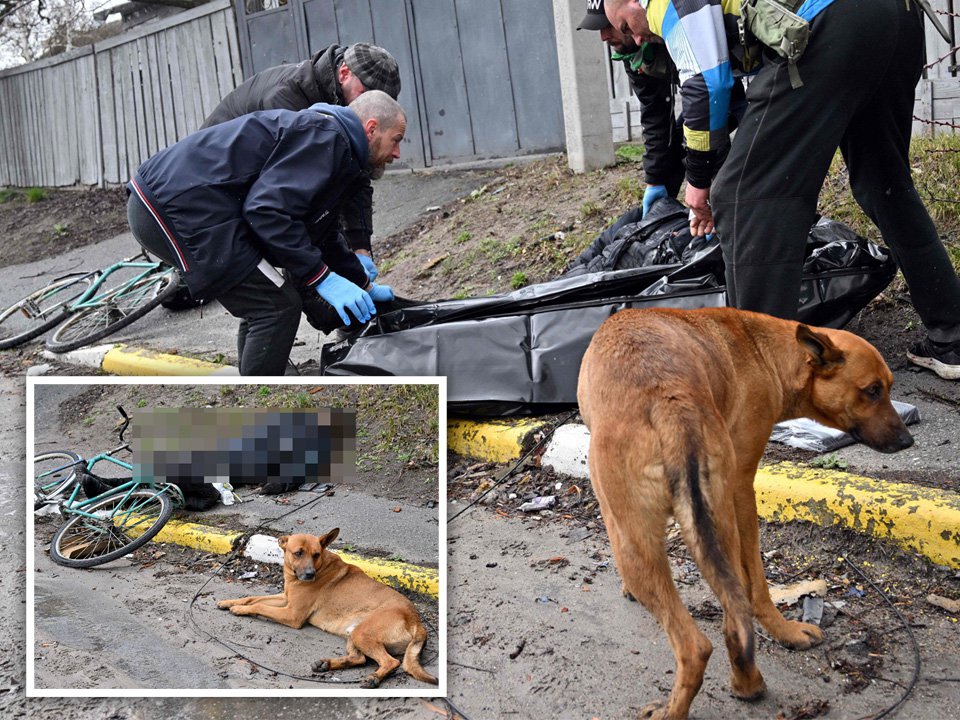 France and Germany have also promised to expel Putin’s diplomats.

Russia has suggested it will respond in kind and ‘slam shut the door on Western embassies’, according to its ex-president and deputy head of security council Dmitry Medvedev.

‘It will be cheaper for everyone. And then we will end up just looking at each other in no other way than through gunsights’, he warned.

But there are fears that further sanctions could spark a European energy crisis and an escalation of the war.

During the course of the war, Ukraine’s President Volodymyr Zelensky has remained in Kyiv, despite the Ukrainian capital being subjected to a barrage of bombing.

Zelensky has continuously pushed for aid and support from world leaders, as well as pressing for fast-tracked NATO membership.

Meanwhile, Russia’s President Vladimir Putin has been widely condemned for his attack on Ukraine.

His actions have been met by harsh economic sanctions, bans from competing in major sporting events, and countries moving away from using Russian oil.