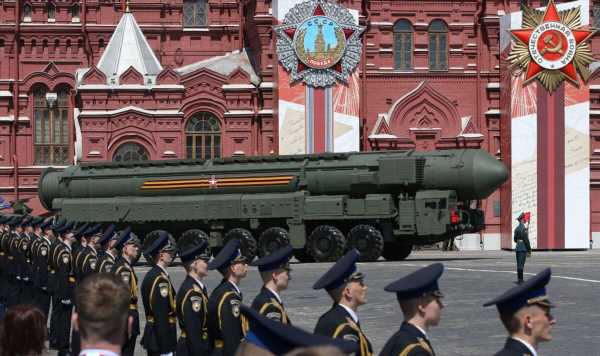 Moscow has repeatedly warned about the dire consequences Western countries could face if they continue to supply arms to Ukraine.

On Thursdays edition of Channel One’s 60 Minutes programme, the chairman of the nationalist Rodina party, Aleksey Zhuravlyov, suggested Russia could launch a Sarmat missile attack on the UK.

Producers then cut to a map of Kaliningrad and seemed to suggest that missiles could be launched from the Russian enclave between Poland, Lithuania and the Baltic Sea.

The implication was that the nuclear weapons could reach Berlin in 106 seconds, Paris in 200 seconds and London in 202 seconds.

BREXIT Britain is the “leading power in Europe”, an expert has said, arguing that Boris Johnson is spearheading the West’s fight against Vladimir Putin.

Nile Gardiner, a former adviser to Margaret Thatcher, told Express.co.uk that the UK is “by far the leading power in Europe” when it comes to “responding to Russian aggression”.

This, he said, is a result of Brexit, which he described as being a “game-changer” for Britain in terms of its “leadership on the world stage”.

Mr Gardiner said that the country is “far more self-confident, assertive and willing to project power” now that it has departed from the EU.

This comes as the UK has been widely praised for its response to Ukraine.

Ukrainian President Volodymyr Zelensky described Mr Johnson as “an example”, suggesting that other countries were “performing a balancing act” when it comes to the war between Russia and Ukraine.