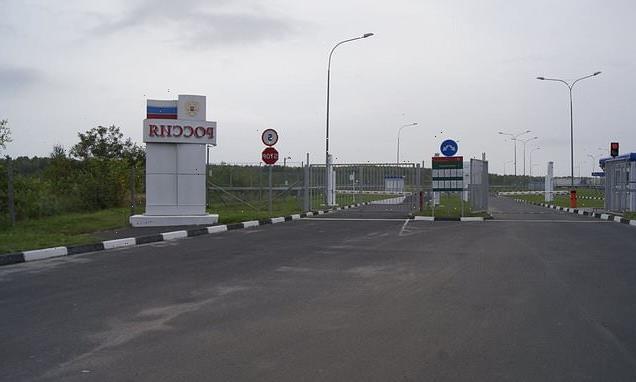 Ukrainian forces hit one of Putin’s army checkpoints inside Russian territory for the second day in a row.

He added no one was killed or injured in the attack and that the Ukrainian firing post was neutralised by Russian return fire. 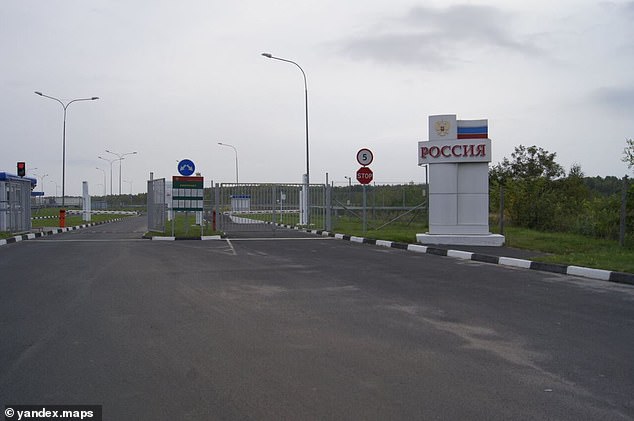 The Krupets border checkpoint in Kursk, Russia was targeted by two strikes in two days

Mr Starovoit added: ‘Thank God no one was killed. I wish you all a good evening.’

The Ukrainian Ministry of Defence did not make any comment on the alleged attack, which has not been verified by outside sources.

It would be the second strike on the Krupets checkpoint in two days, after Kyiv forces hit the border post around 8am yesterday.

An FSB secret service bureau in Bryansk was also struck by Ukrainian artillery on Friday, the region’s governor said.

AV Bogomaz wrote that no one was killed or injured by water and electricity grids were hit.

‘A tree fell under shelling at the cemetery’, Mr Bogomaz added.

The rumoured attacks follow bombings by Ukrainian forces in Russia region Belgorod over the past few days.

Ukraine said ‘sooner or later the debts will have to be repaid’ after a suspected ammunition dump on army warehouses at 3.30am on Wednesday.

Kyiv did not otherwise admit responsibility for the damage.

Air defences were also active over Kursk and Voronezh regions as Russia said it shot down Ukrainian drones that entered its territory.

Presidential adviser Mykhailo Podolyak commented less than obliquely: ‘If you decide to massively attack another country, massively kill everyone there, massively crush peaceful people with tanks, and use warehouses in your regions to enable the killings, then sooner or later the debts will have to be repaid.

‘The disarmament of the Belgorod and Voronezh killers’ warehouses is an absolutely natural process. Karma is a cruel thing.’ 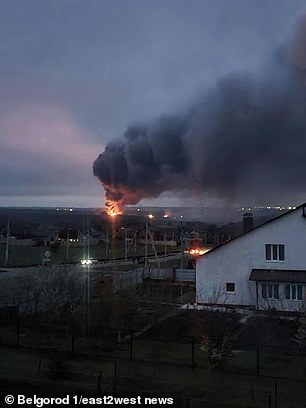 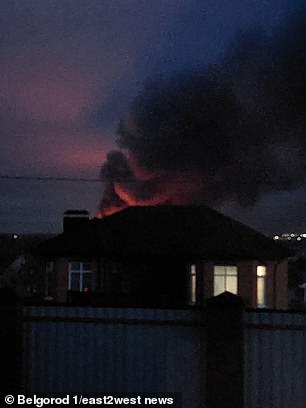 The Belgorod military warehouse attacks (left and right) took place at 3.30am on Wednesday

Ukraine has ramped up its attacks on targets inside Russia with the apparent blessing of Western allies including Britain.

Armed forces minister James Heappey said two weeks ago: ‘It is completely legitimate for Ukraine to be targeting in Russia’s depth in order to disrupt the logistics that, if they weren’t disrupted, would directly contribute to death and carnage on Ukrainian soil.

‘There are lots of countries around the world that operate kit that they have imported from other countries. 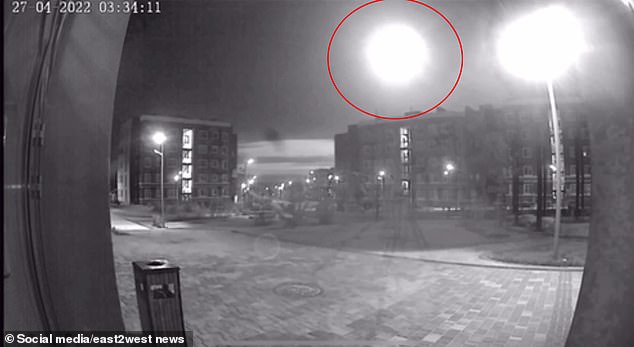 The UK is supplying arms to Ukraine including the Starstreak missile system and Stormer vehicles needed to carry it.

Belgorod has been the most heavily targeted, with missile strikes and a helicopter raid targeting fuel and ammunition dumps.

A railway bridge was also targeted in the same region in what is widely suspected to have been a sabotage attack by Ukrainian special forces.

Belgorod is a key staging point for Russian forces heading to join the fight in Ukraine’s Donbas region, where a major offensive to seize the eastern part of Ukraine is underway.

The frequency of the attacks has caused fury within Russia, with the Kremlin threatening to step up attacks on ‘decision-making centres’ in Kyiv in retaliation – a thinly-veiled threat to target government and military headquarters.

The Kremlin ‘suicides’: Four gas chiefs and their suspicious deaths

Vladislav Avayev: The Gazprombank vice-president, 51, was found dead in his penthouse Moscow apartment on April 18 alongside his wife Yelena and daughter Maria.

They were found by Avayev’s eldest daughter Anastasia with a gun in the father’s hand in the locked apartment.

Initial reports in Russia said Yelena was pregnant by their driver and Vladislav killed her in a fit of rage.

Others have doubted this and questioned why an FSB gun was found inside the flat.

Sergey Protosenya: The oligarch worth £350million was found dead in Spain with his wife Natalia and daughter Maria.

He was found hanged outside their Costa Brava villa while the two others were hacked to death inside.

But investigators found no blood on Sergey, no suicide note and no fingerprints on the weapon.

Alexander Tyulakov: On February 25, the day after the Ukraine war started, the senior Gazprom official’s body was discovered by his lover.

His neck was in a noose in his £500,000 home in a luxury Leningrad housing development.

Reports say he had been badly beaten shortly before he ‘took his own life’.

Leonid Shulman: In the same gated housing estate three weeks earlier, the head of transport at Gazprom Invest was found dead with multiple stab wounds on his bathroom floor.

Investigators said a note was found but they have not released its contents.

A knife was found on the bathtub, seemingly out of reach.