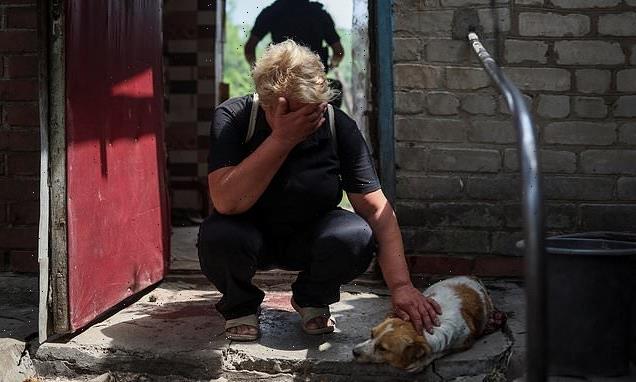 Another Ukrainian official urged people in Russian-occupied southern areas to evacuate quickly ‘by all possible means’ ahead of a Ukrainian counteroffensive.

Deadly Russian shelling was reported in Ukraine’s east and south.

The governor of the eastern region of Luhansk, Serhyi Haidai, said Russia launched over 20 artillery, mortar and rocket strikes in the province overnight and its forces were pressing toward the border with the Donetsk region.

‘We are trying to contain the Russians’ armed formations along the entire front line,’ Haidai wrote on Telegram.

Last week, Russia captured the last major stronghold of Ukrainian resistance in Luhansk, the city of Lysychansk. Analysts predicted Moscow’s troops likely would take some time to rearm and regroup.

But ‘so far, there has been no operational pause announced by the enemy. He is still attacking and shelling our lands with the same intensity as before,’ Haidai said. 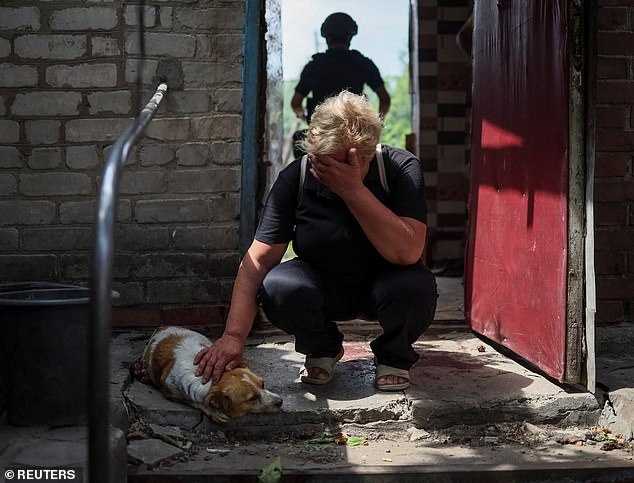 Lena, 58, reacts near her critically wounded during a Russian military strike, dog Hera, as Russia’s attack on Ukraine continues, in Kostiantynivka today 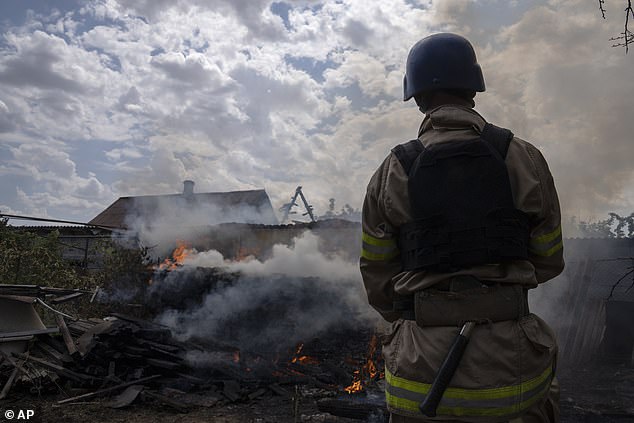 A firefighter hoses down a house on fire after cluster rockets hit a residential area, in Konstantinovka, eastern Ukraine today 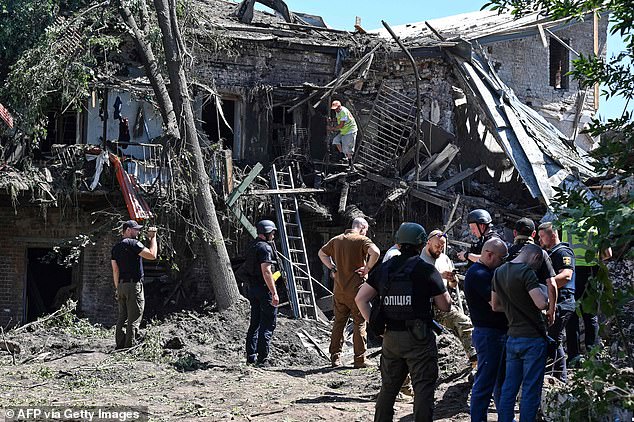 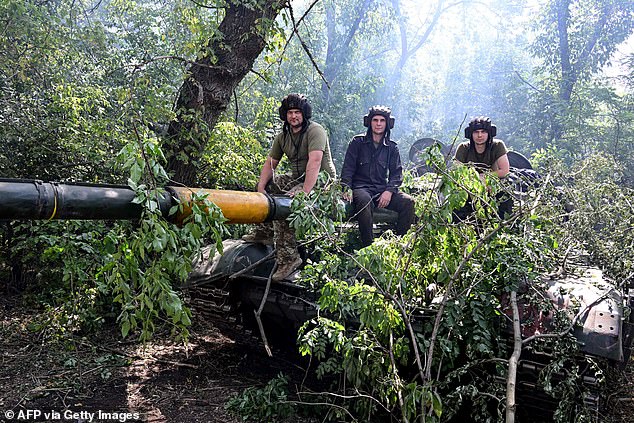 Ukrainian soldiers from the 14 mechanised brigade, Andrii the commander, Ivan the driver and mechanic and Maksym the gunner siton their T-72 tank on the frontline, in the countryside near Bakhmut, eastern Ukraine today

In a later post, he claimed Russian bombardment of Luhansk was suspended because Ukrainian forces had destroyed ammunition depots and barracks used by the Russians.

Ukraine’s deputy prime minister, Iryna Vereshchuk, appealed to residents of Russian-held territories in the south to evacuate so the occupying forces could not use them as human shields during a Ukrainian counteroffensive.

‘You need to search for a way to leave, because our armed forces are coming to de-occupy,’ she said. ‘There will be a massive fight. I don’t want to scare anyone. Everyone understands all of this anyway.’

Speaking at a news conference late Friday, Vereshchuk said a civilian evacuation effort was underway for parts of the Kherson and Zaporizhzhia regions. She declined to give details, citing safety considerations.

It was not clear how civilians were expected to safely leave Russian-controlled areas while missile strikes and artillery shelling continue in surrounding areas, or whether they would be allowed to depart or even hear the government’s appeal.

Five people were killed and eight more wounded in Russian shelling Friday of Siversk and Semyhirya in Donetsk province, its governor, Pavlo Kyrylenko, wrote Saturday on his Telegram channel.

In the city of Sloviansk, named as a likely next target of Russia’s offensive, rescuers said they pulled a 40-year-old man from the rubble of a building destroyed by shelling Saturday. Kyrylenko said multiple people were under the debris.

Russian missiles also killed two people and wounded three others Saturday in the southern city of Kryvyi Rih, according to regional authorities. 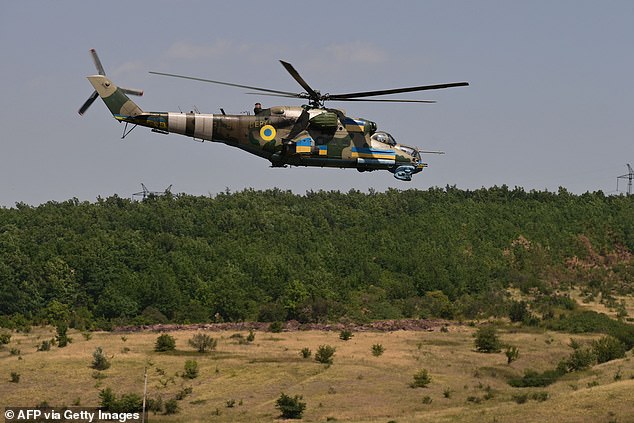 An attack helicopter Mi-24 flying over a field near Bakhmut, eastern Ukraine today 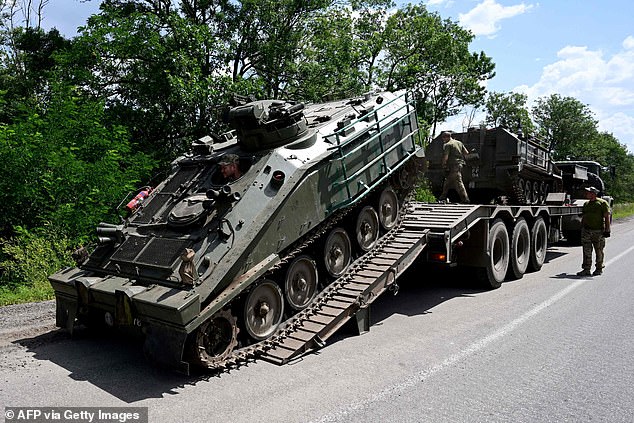 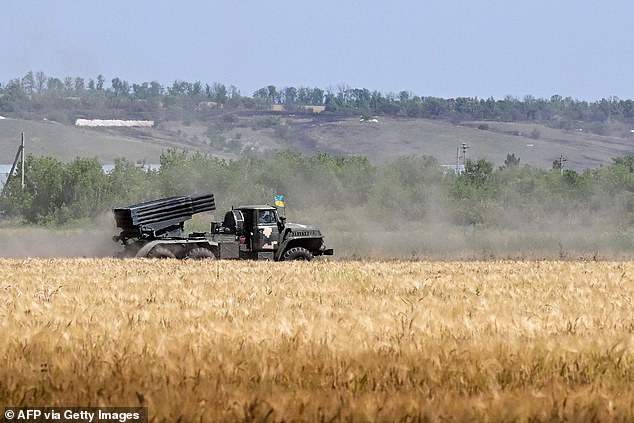 A multiple rocket launcher BM-21 grad on a road in the countryside near Bakhmut, eastern Ukraine today

‘They deliberately targeted residential areas,’ Valentyn Reznichenko, governor of the eastern Dnipropetrovsk region, asserted on Telegram. Kryvyi Rih’s mayor, Oleksandr Vilkul, asserted on Facebook that cluster munitions had been used and urged residents not to approach unfamiliar objects in the streets.

‘An Iskander ballistic missile was probably used in the strike,’ the Kharkiv Regional Prosecutor’s office said. ‘One of the missiles hit a two-story building, which led to its destruction. Neighbouring houses were damaged.’

The city has been targeted throughout the war, including several times in the past week. As survivor Valentina Mirgorodksaya dabbed at a cut on her cheek, first responders warily inspected the building shattered in Saturday’s strike.

Mykolayiv Mayor Oleksandr Senkevych reported in a Telegram post that six Russian missiles were fired at his city in southern Ukraine, near the Black Sea, but caused no casualties. 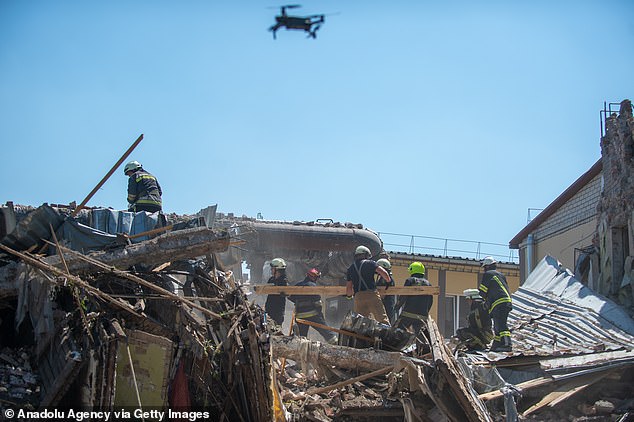 Rescuers sort through the rubble of an apartment building after Russian missile hit a residential building in the city center in Kharkiv, Ukraine today 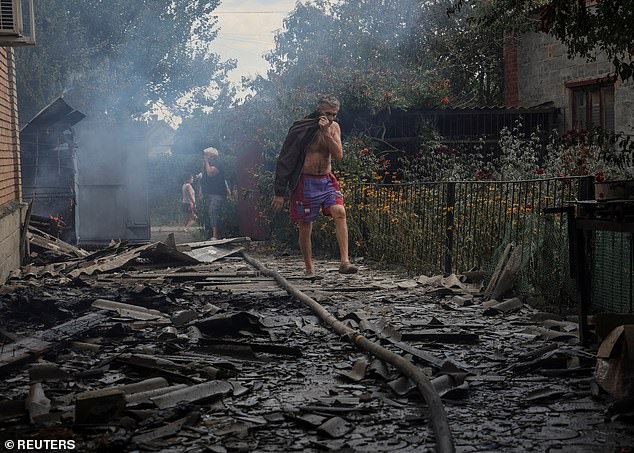 A local resident Volodymyr, 64, walks near his burning house after a Russian military strike, as Russia’s attack on Ukraine continues, in Kostiantynivka, Ukraine today

Russian defence officials claimed Saturday that their forces destroyed a hangar housing U.S. howitzers in Ukraine, near the Donetsk province town of Chasiv Yar. There was no immediate response from Ukraine.

In other developments, Ukraine’s national police force said it was opening a criminal investigation into the Russian military’s alleged destruction of crops in southern Ukraine’s Kherson region.

In a Telegram post, it accused Russian troops of not allowing residents to put out fires in fields and otherwise sabotaging the harvest.

‘Because of the constant shelling, it is extremely difficult to extinguish (field) fires in the de-occupied territories, and in the occupied lands, the Russians deliberately do not allow the extinguishing of fires,’ the police force said.

The British Defense Ministry reported Saturday that Russian forces in Ukraine were now being armed with ‘obsolete or inappropriate equipment,’ including MT-LB armoured vehicles taken out of long-term storage. The MT-LB entered service in the Soviet military in the 1950s and does not provide the same protection as modern armoured vehicles. The Russians also have brought Cold War-era tanks out of storage.

‘While MT-LBS have previously been in service in support roles on both sides, Russia long considered them unsuitable for most frontline infantry transport roles,’ the British ministry said on Twitter.