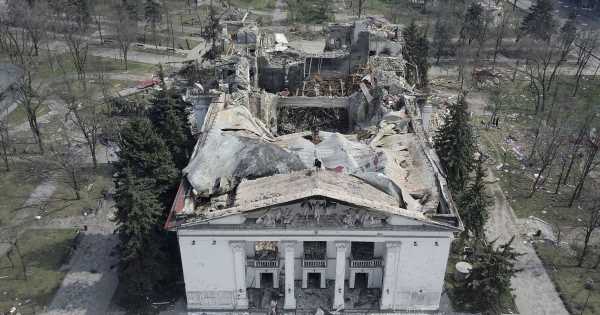 A Ukrainian woman who went to the theatre in the city to hide from Russian bombs has told of how the apparent safe haven "became one of the most dangerous" places.

Lyudmila, who lived in Mariupol before the war, and during the war hid in the city Drama Theatre, described constantly waking up at 4:00 am from the sounds of explosions and detailed the horror of life in the shelter.

Before moving to the shelter the area around her house was constantly rocked by bombs. She and her husband made the decision to up and leave when it got worse.

"There were covered bodies in the courtyards. At first I didn't even understand what it was – I thought it was something simple, covered with a bag or a blanket," she told Wonderzine.

"For me, it's so wild in the 21st century that I just didn't want to realize these new realities.

"Then a neighbour began to explain to me that it had killed two of them yesterday, and two or three others had been injured in hospital. And I still couldn't believe it was happening to us."

She went to the theatre for treatment at a makeshift hospital in the theatre, which is near her apartment.

Lyudmila described how a Russian airstrike left her covered in rubble and out cold.

"I heard the plane, ran back. I was in the hallway, holding a kitten in my arms, and it started to move, jumped out and ran to the room, and I followed him," she recounted.

"That was the last thing I remember – I came to my senses only a day and a half later. So everything is from the words of my husband. He saw me arrive, ran to look for me, found me only because I whined, then dug me up and took me home."

She said many people were crushed in the theatre and it was not even possible to dig them up. "Many people lay without limbs," she said.

Lyudmila said she suffered "a broken arm bone, a purple face, one eye did not flatten, and my teeth [were] knocked out."