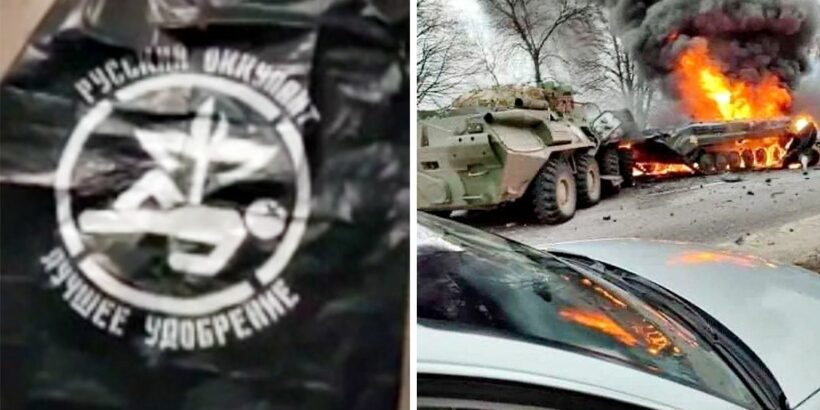 Ukrainian soldiers have allegedly been given a new piece of equipment in their fight against the Russian invasion – but it's not a weapon.

Video footage emerged overnight of a Ukrainian soldier showcasing his new tool, which, he claims, is a biodegradable body bag.

And it is said that they are being given to Ukrainian soldiers to use because “Russia is not burying their dead”.

The video, which doesn't have an exact location, shows what looks like a black plastic bin bag with a clip art-style image of a soldier lying on the floor with a sunflower growing out of its stomach.

A translation of the voice in the video states: “Look, dudes. I have been fighting with f*****g Russians for eight years now.

“And I was given everything from a soviet metal helmet to NVGs.

“But this is the first time I see something like this.

“As I understand it, the Russians are totally f****d by their government.

“Nobody is going to take away their bodies.

“Then we Ukrainians will make sure that they get home properly.

“Russian occupant is the best fertilizer, and it's hard to disagree with that.”

It divided opinions among the users.

One user, Corcyra wrote: “(Being buried in the bags) was once a young man, and probably a lot of care and love has gone into his short life by the parents who loved him and raised him.

“All gone to waste because of one disgusting, narcissistic man's power lust, and greed.

“Putin needs to rot in whatever hell he believes in."

And another wrote about how “sad” it is that Russia has been hiding its losses.

Russia has refused to release official casualty statistics, but it is believed several thousand soldiers may have died so far, according to Ukrainian officials.