Site of protest against corruption targeted by authorities in Kiev amid violent clashes and detention of 100 people. 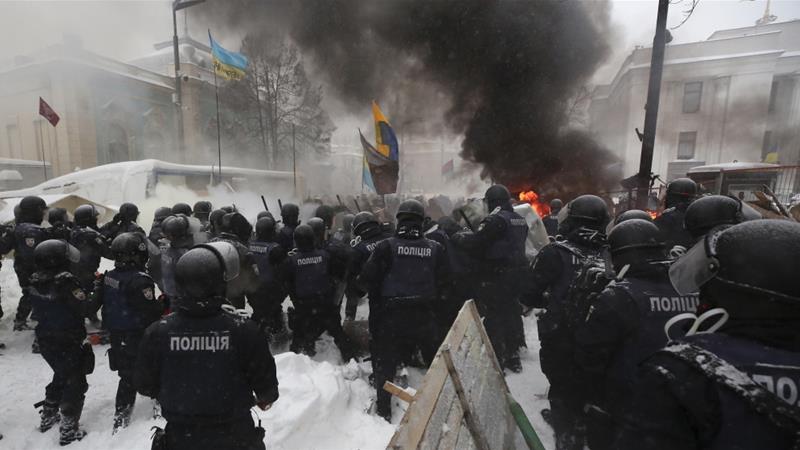 At least 10 demonstrators have been injured in clashes with Ukrainian police and another 100 detained in the capital Kiev after authorities began dismantling a makeshift “tent city” protesting against corruption.

The tent city was set up in October by supporters of Mikheil Saakashvili, a former president of Georgia who has become an opposition politician in Ukraine.

Saakashvili, a critic of corruption in Ukraine, was deported to Poland in February. He said he was “kidnapped” by Ukrainian authorities and removed from the country against his will.

Andriy Kryshchneko, police chief of police, said at the camp on Saturday that “two court decisions” allowed authorities to search and dismantle the camp.

Police said that explosives and other weapons were found at the scene.

Yuri Lutsenko, Ukrainian prosecutor, said in a Facebook post that from “the first day of the Saakashvili demonstration, I, as general prosecutor, spoke of the guarantee of peaceful protest.

But to turn the tent village … into a hoard of extremists, weapons and explosives is taboo.”

The tent camp is part of a broader movement calling for the resignation of Ukrainian President Petro Poroshenko.

Poroshenko won the 2014 presidential election following the overthrow of a pro-Russia government by popular demonstrations.

Members of the broader movement of which the tent city was a part are also calling for a national anti-corruption court.

Corruption is reportedly a growing problem in Ukraine.

Before his deportation, Saakashvili was a well-known critic of Poroshenko’s efforts to fight corruption in Ukraine.