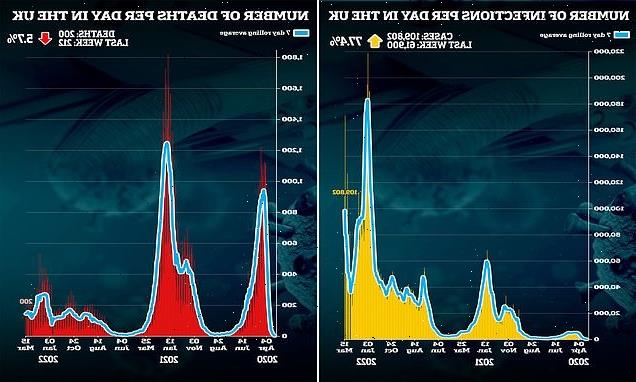 UK’s Covid cases jump by 77% in a week to soar past 100,000 amid warning that current dominant strain is as contagious as MEASLES – while NHS admissions creep up by another 13 per cent but deaths fall

The UK’s coronavirus wave has grown 77 per cent in a week, as World Health Organization warns the dominant Omicron strain is as infectious as measles.

Daily dashboard data shows another 109,802 people tested positive across the UK — a jump of 77.4 per cent on last Tuesday. However, the figure includes four days of infection data from Scotland, where cases are climbing.

It comes as a former World Health Organization official today warned Omicron subvariant BA.2 is 40 per cent more transmissible than its ancestor strain, making it around as contagious as measles — the most contagious disease scientists are aware of.

Meanwhile, daily Covid hospitalisations increased 12.7 per cent over the last seven days to 1,560 on Thursday. However, deaths dropped 5.7 per cent week-on-week to 200.

Both measurements lag two to three weeks behind the trend in cases due to the time it takes an infected person to become seriously unwell.

Daily cases have been on the rise for nearly two weeks, coinciding with the end of Covid restrictions in England. People in the country are no longer required to wear face coverings on public transport or isolate when they test positive.

Scotland’s First Minister Nicola Sturgeon today confirmed rules requiring people north of the border to wear masks on public transport and in shops would stay in place until at least April 4 amid climbing cases, which jumped 39 per cent in the week to March 10. 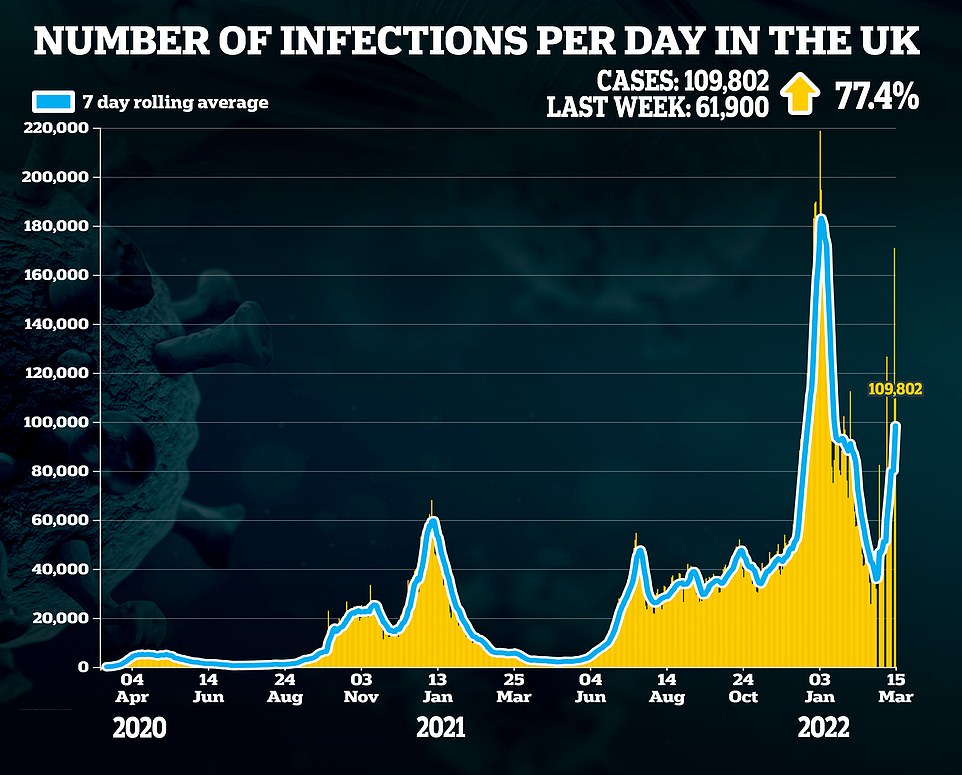 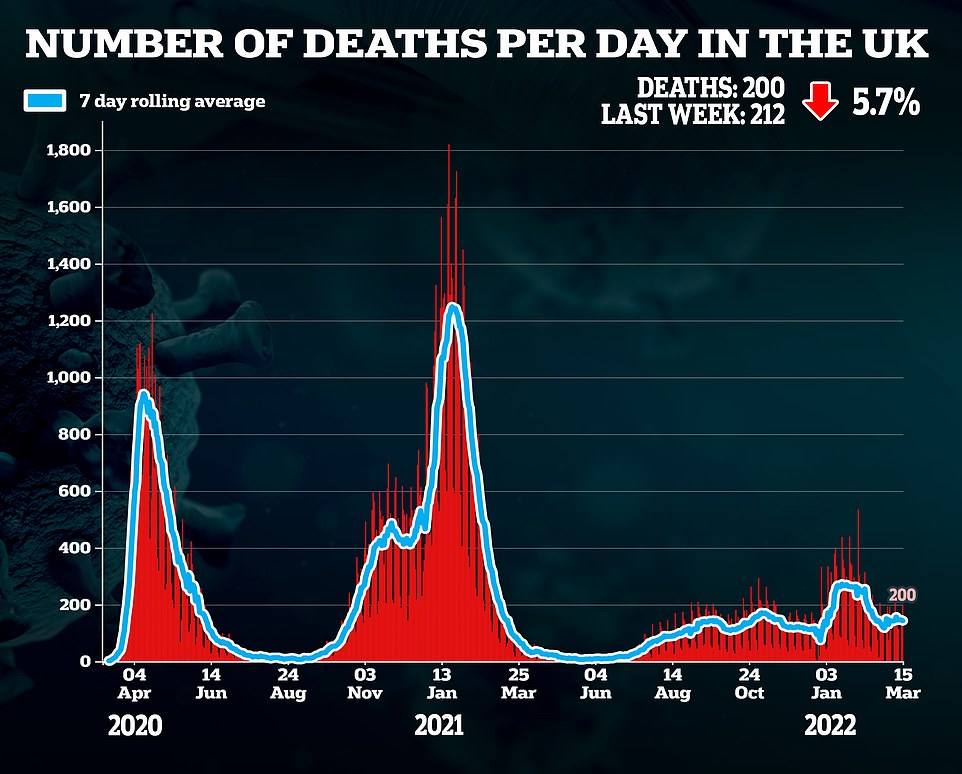 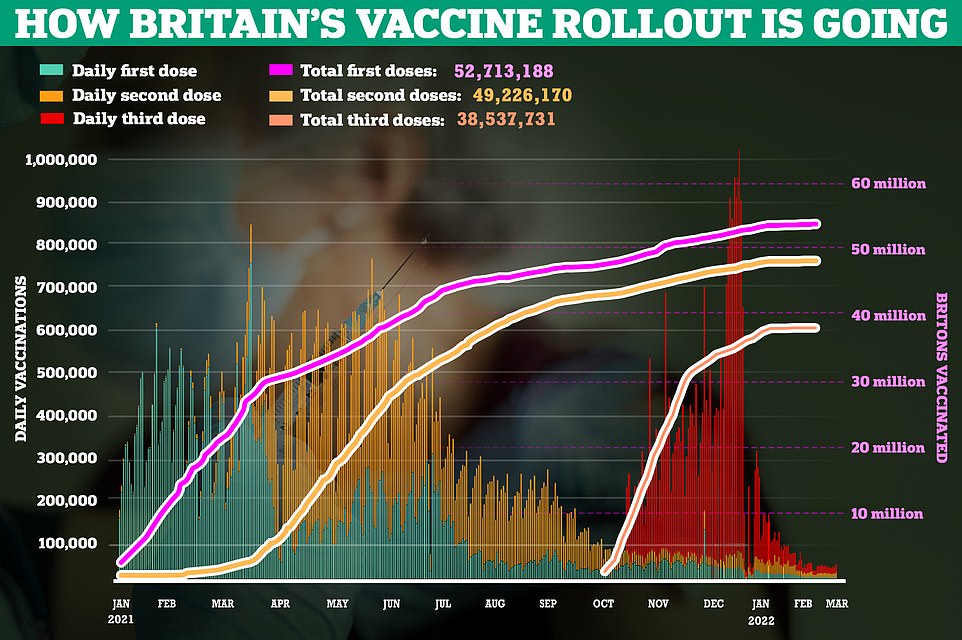 It comes as Professor Adrian Esterman, a leading epidemiologist in Australia and former WHO official, said BA.2 is 40 per cent more transmissible than the original variant.

He claimed it would have a basic reproduction number (R0) of around 12, meaning if left to spread unchecked every infected person would pass it to a dozen others.

It would make the sub-strain five times more infectious than the original Wuhan virus and one of the most contagious diseases known to science.

The claim would explain why the mutant virus was able to outstrip its parent strain in the UK in about a month and undermine China’s zero Covid policy, which has until now managed to suppress every version of the virus.

Deltacron is ‘not of particular concern’, UK health secretary says

The ‘Deltacron’ Covid variant is ‘not of particular concern’, the UK’s health secretary has said.

Cases of the strain — which is a hybrid between Delta and Omicron — have been detected in six countries so far.

But they are in small numbers and appear to have been present since January, with no sign of any sparking a surge in infections.

Sajid Javid told the Commons yesterday that a ‘handful’ of cases had been detected in the UK.

He told Sky News: ‘We keep the situation very carefully under review.

‘There’s no other variant of concern out there that is an issue at this point in time.

‘We have seen some rises in infections over the last week, but given the increase in social mixing this was to be expected.’

More than 78 cases have been spotted globally so far, including 32 in the UK.

France has the biggest outbreak (32 cases), followed by the UK, Germany (one), Belgium (one) and the Netherlands (one).

Explaining his methodology, Professor Esterman said: ‘The basic reproduction number (R0) for BA.1 is about 8.2, making R0 for BA.2 about 12.

‘This makes it pretty close to measles, the most contagious disease we know about.’

The R0 number is the average number of people each BA.2 patient would infect, if there was no immunity in a population or behavioural changes.

But most scientists say there is no reason to be concerned over the variant because it is just as mild as the original Omicron.

The BA.2 sub-variant is now behind almost every case in England, or 83 per cent of infections last week, according to official estimates.

It became dominant three weeks beforehand, accounting for 52 per cent of all infections in the week to February 20.

The Office for National Statistics (ONS) estimates cases have been rising since mid-February, with one in 25 people in England estimated to have been infected last week.

Hospitalisations are also creeping up, but the majority appear to be incidental — when someone tests positive after admission for another illness.

Scientists estimate the original Wuhan strain of SARS-CoV-2 had an R0 of around 2.5.

However, measles — one of the most contagious viruses known to exist — has an R0 of between 12 and 18.

Experts estimate the equivalent number for chickenpox sits in the region of 10 to 12.

Even if BA.2 does have an R0 of 12, it does not mean everyone infected with BA.2 will actually pass the virus onto a dozen others.

The actual R rate — which reflects how quickly an outbreak is growing or shrinking — is always much lower than R0.

This is because it takes into account real-world data which can easily skew the shape of disease outbreaks, such as population immunity.

In Hong Kong, where its early success in controlling the virus led to low vaccine uptake, cases, hospitalisations and deaths are rising quickly amid the emergence of BA.2.

Professor David Livermore, a microbiologist at the University of East Anglia, said it ‘may be the case’ that R could be 12 in a population without immunity to the virus.

But he stressed that these populations now do not exist almost everywhere in the world because the virus has reached every corner of the globe. 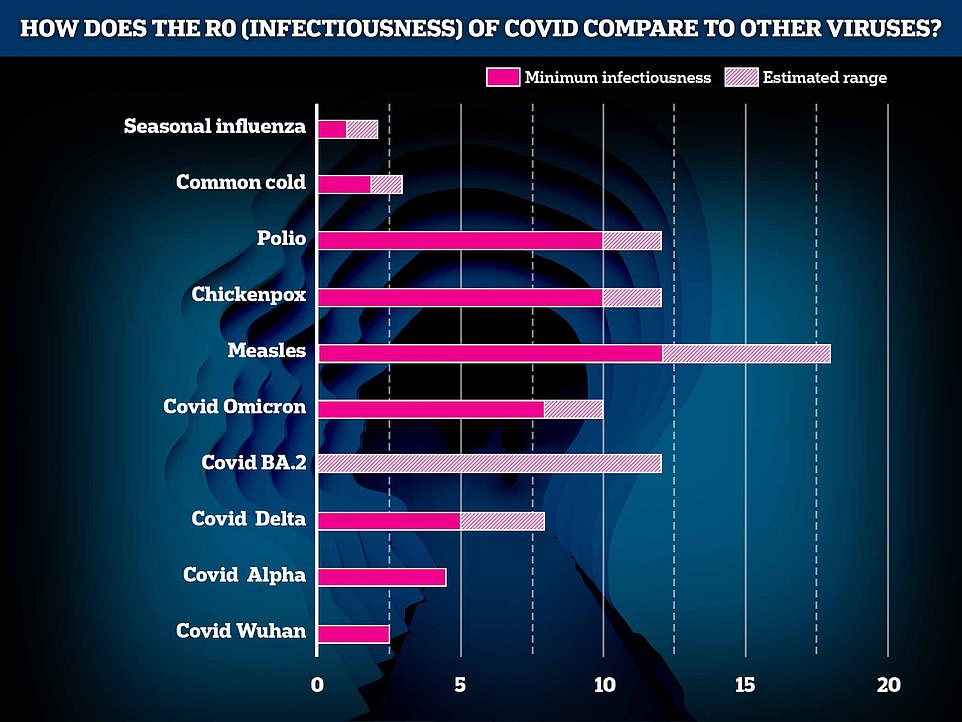 Pictured above is the R0 estimates for Covid variants against well-known diseases including the common cold, chickenpox and measles. The latter is estimated to be among the most infectious diseases to target humans 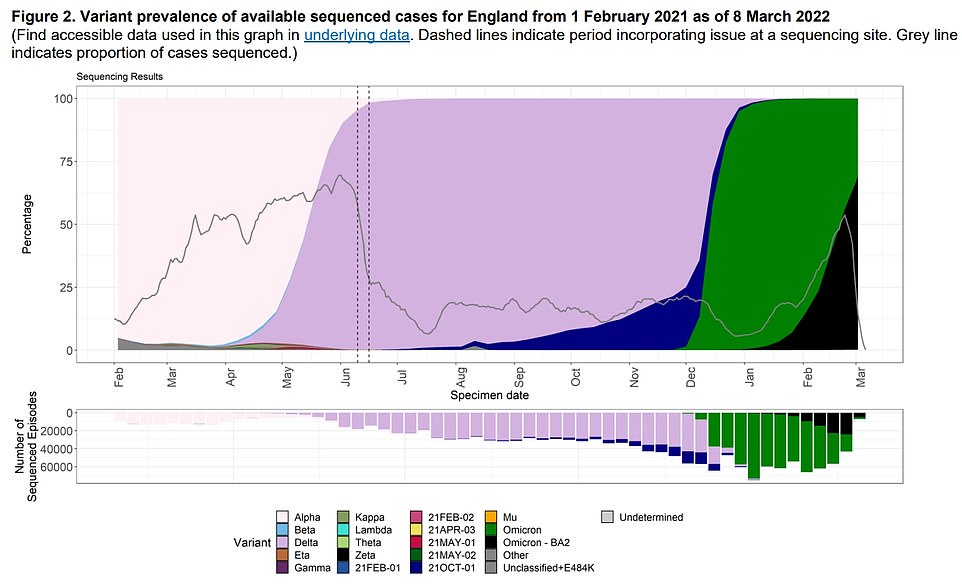 The above chart shows the proportion of cases each variant was behind since February 1. It reveals that BA.2 (brown) is now behind almost all infections in England, overtaking the original Omicron strain (green)

Asked whether people should be concerned about BA.2, Professor Livermore said this was not the case.

‘I think the virus has simply got embedded in the population,’ he told MailOnline. ‘And BA.2 doesn’t seem to be any more able to cause severe disease than classical Omicron’.

Professor Julian Tang, a respiratory sciences expert at Leicester University, said the estimate was ‘pretty high’ for a respiratory virus, although not impossible.

He told MailOnline: ‘That’s pretty high for a respiratory virus, but that could be true. I need to see some estimates from somewhere else before taking a view.’

In Denmark, where BA.2 has been dominant for weeks, officials lifted restrictions in February saying the virus no longer posed a ‘critical threat’.

They have risen every day since and are now at their highest level in a month, with about 63,000 registered every 24 hours on average.

Hospitalisations are also heading upwards, with 1,300 people being admitted to wards every day on average.

Covid deaths remain flat, but they are a lagging indicator because of the time taken for someone who has caught the disease to die from it.

SAGE adviser and epidemiologist at Edinburgh University Professor Mark Woolhouse told Forbes last week: ‘In my estimation, the most important driver of the recent increase in cases and hospitalisations in the UK is the rise of BA.2 Omicron sub-variant.’