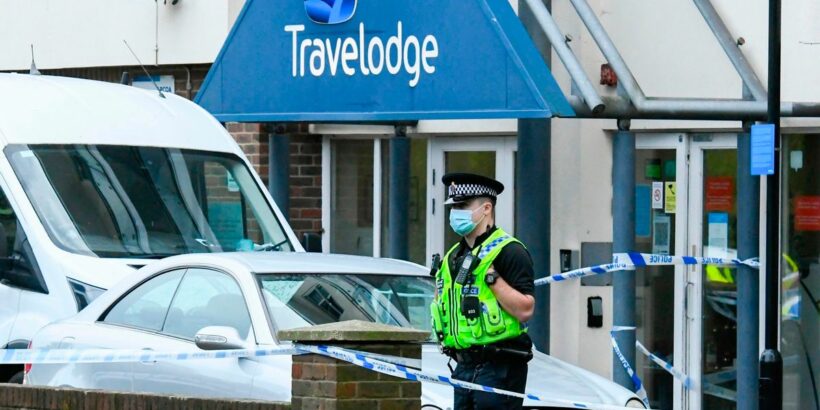 Britain is home to some of the most luxurious hotels in the world.

Most days pass by peacefully as tourists enjoy some well-earned downtime in the cosy bars and relaxing spas.

But some days are different.

There are times when the cops are called and a crime scene is taped up.

Despite being rare occurrences, British hotels have been plagued by some truly chilling deaths.

From the early 20th century all the way up to the present day, people have lost their lives in the cruelest of ways – from hotel guests to reception workers.

Below are some of the most gruesome cases recorded in the UK.

Shop worker Cerys Yemm, 22, was enjoying a night out in South Wales when she was charmed by Matthew Williams.

Little did she know, Williams, 34, had only been released from jail two weeks earlier.

He invited her back to his room at the Sirhowy Arms Hotel in Argoed, Blackwood, where she met her ugly death.

The killer died shortly after being Tasered.

An inquest later heard that Yemm had an eyeball torn out and suffered several bite marks during her grisly murder in December 2014.

Her cause of death was sharp force trauma to the head and neck.

Chenise Gregory and Michael McGibbon, both 29, were visiting a luxury spa hotel earlier this year – but neither made it home.

That’s because their time at the Hilton Majestic Hotel and Spa in Harrogate, North Yorkshire, ended in tragedy.

Childcare specialist Gregory was killed by her ex-boyfriend, who then stabbed himself to death in May.

They were not in a relationship during the trip to the fancy hotel.

Marta Vento, 27, was working on the reception desk alone at the Travelodge on Christchurch Road, Bournemouth, on the morning of December 9, 2020.

And her night shift ended in horror when she was brutally killed and left lying in a pool of blood close to the reception and bar area.

The man responsible was Stephen Cole, 32, who attacked Ms Vento while holding a set of clippers.

CCTV showed Spanish national Ms Vento being punched and kicked over and over again.

Cole pleaded guilty to manslaughter by reason of diminished responsibility and was handed an indefinite hospital order.

The court heard he had been suffering from psychosis.

Colleagues Hayden Fitzpatrick, 21, and Tom Noakes, 29, were on a night out in Manchester in September 2018.

But it ended in tragedy when Noakes was bludgeoned with a magnum of Prosecco by Fitzpatrick at the Britannia Hotel.

Cops were called when Fitzpatrick leapt to his death after jumping from a window.

Officers soon found Noakes’ body sitting on a chair beside a window that was smashed with a fire extinguisher.

An inquest concluded that Noakes was hit at least six times.

Earlier in the night, a third man was invited to the room via the Grindr dating app but both Fitzpatrick and Noakes were still alive when he left.

The Pembridge Court Hotel in Notting Hill Gate became a murder scene because of one of Britain’s most notorious killers, Neville Heath.

The killer lured Margery Gardner, 32, to a hotel room where she was severely beaten and lashed.

They had met at the Panama Club earlier in the night before Gardner was viciously mutilated.

The single mum was found by the hotel manager the following day in June 1946.

The business is now called the Abbey Court Hotel.

Heath was also charged with murdering another woman, Doreen Marshall, at a different hotel after he butchered Gardner.

He was found guilty of Gardner’s murder and was executed by hanging at Pentonville Prison in West London in October, 1946.

Got away with murder

A woman got away with murder back in 1923 after she shot her husband dead at the Savoy Hotel in London.

Parisian Marguerite Fahmy and her wealthy Egyptian husband Ali Kamel Fahmy Bey were on their honeymoon at the time.

But he died after his new wife blasted him with a 32-caliber pistol in front of shocked witnesses at the hotel.

Fahmy had been an ex-lover of the Prince of Wales, the future Edward VIII during the First World War.

And she is rumoured to have used her secret past relationship with the Prince of Wales to avoid a murder charge.

Under pressure, the judge declared her innocent and she was acquitted on the grounds of self defence and the royal scandal of the century was buried.