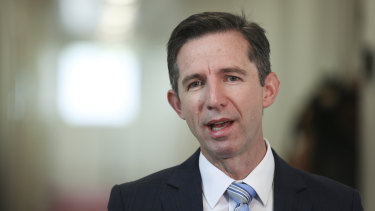 The weekend decision, taken by China's National Development and Reform Commission at a meeting with 10 Chinese power plants and reported by The Global Times on Monday, meant Australian coal would be blocked indefinitely while China ramps up imports from Mongolia, Indonesia and Russia.

"It is certainly unacceptable to see a circumstance where governments, businesses find out about decisions of other businesses or other governments, purely via media outlets," he said.

"I can assure everyone that when the Australian government makes decisions that affect other governments, we work through the proper diplomatic channels to inform those governments and we do so in a manner that is respectful and appropriate."

Prime Minister Scott Morrison said that if the reports of a ban were accurate, that "would obviously be in breach of WTO rules" and it "would be obviously in breach of our on free trade agreement".

Australia exports $14 billion coal each year to China. The directions from China's planning agency appear to target power-generating thermal coal, which is worth $4 billion a year. But shipments of Australian coking coal, which is used to make steel, have also been stuck off the coast of China unable to offload their cargo.

"Australian coal is around 1.5 times more efficient in terms of energy production than most other competitor nations, including Chinese domestic coal," said Senator Birmingham.

"That means that to get the same level of energy generation, China will end up having to use more coal from other sources and generate more emissions from those sources, which will do anything but help China in terms of meet some of the commitments it has made to the world around missions reduction as well."

Australia has been criticised for not adopting a net-zero emissions target by 2050 or 2060, while its major trading partners, including China, Japan, Europe and South Korea, move towards the goal.

More than half-a-dozen Australian industries have been hit with trade strikes by Beijing since Australia called for an inquiry into the origins of the coronavirus inquiry in April. The dispute has accelerated since Australia criticised China's actions in Hong Kong and the South China Sea and now covers more than $20 billion in Australian exports across beef, barley, wine and coal.

"We have been working within government to build the strongest possible case in defence of our industry, which, frankly, is pretty easy to build because Australian grain growers and farmers are not subsidised," he said.

"They don't dump their products on global markets and with clearly have the evidence to mound a strong case in that regard."

The WTO has been plagued by delays after the Trump administration blocked key appointments to its dispute resolution panel. Any recourse for Australian farmers is likely to take years to resolve.

Mr Morrison said Australia would not change its values in response to economic pressure from Beijing.

"We decide who invests in Australia. We have a free liberal democracy where members of Parliament can speak their mind and you as a journalist can report in a free press," he said.

"I don't think these are things that with should be bargaining. I think Australia has a long-term position when it comes to human rights issues that this government and many other governments, together with countries around the world, have all held a consistent position on is something that with should be trading away."