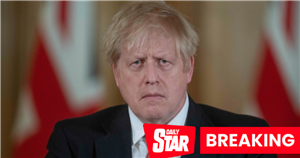 Join the Secret Elves to get first access to our exclusive reviews of the must-have products this year.

Boris Johnson will address the nation in a televised statement tonight to urge Brits to get their booster jabs – less than 24 hours after pictures emerged of him apparently breaking his own lockdown rules hosting a Downing Street Christmas quiz last year.

The under-fire PM is expected to make an appeal to Brits up and down the country to get their Coronavirus vaccine booster shots in a bid to help the UK beat back the spread of the Omicron variant.

It will take place at 8pm, and news of the briefing comes just minutes after it was confirmed that the UK's Covid Alert Level has been increased from Level 3 to Level 4 “in light of the rapid increase in Omicron cases”.

Boris Johnson was pictured on screen sitting underneath a portrait of former PM Margaret Thatcher as he read out quiz questions.

A source told The Sunday Mirror many staff huddled by computers, conferring on questions and drinking fizz, beer and wine from a local Tesco Metro.

The insider said in one office there were four teams each made up of six participants.

The quiz took place on December 15, three days before an alleged No10 Christmas party now being probed, with the PM flanked by two members of his top team who were not drinking.

At the time, London was under Tier 2 regulations banning any social mixing between households – which Mr Johnson appeared to have breached by mixing with the aides.

Official guidance also stated: “You must not have a work Christmas lunch or party, where that is a primarily social activity and is not otherwise permitted by the rules in your tier.”

A No10 spokesman said of the new revelations: “This was a virtual quiz. Downing Street staff were often required to be in the office to work on the pandemic response so those who were in the office for work may have attended virtually from their desks.

“The Prime Minister briefly took part virtually in a quiz to thank staff for their hard work throughout the year.”

The furore could not have come at a worse time for Boris Johnson, as the spread of the highly-infectious Omicron variant across the UK has vastly sped up in the run up to Christmas.

Cases of the new variant in the UK have risen to 3,137 tonight – this time a week ago there were just 197 recorded.

The worrying spread has sparked concerns that Johnson's government may be weighing up extra "Plan C" restrictions before Christmas.