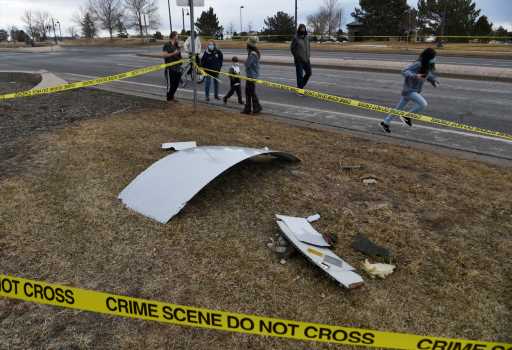 That honeycomb material? No, thank you.

Residents have called the police department hundreds of times in the last 24 hours to to report or turn in debris from a United Airlines plane’s engine that burst into flames and rained down parts Saturday — some enthusiastic searchers even started putting flags by debris at Broomfield County Commons Park — but police say it’s time for everyone to slow down.

“We were just getting overwhelmed by the amount of calls,” police spokeswoman Rachel Welte said.

The police department has collected several dozen plane pieces that will be turned over to the National Transportation Safety Board, which is investigating the uncontained engine failure on Flight 328 that happened shortly after the Hawaii-bound plane left Denver International Airport around 1 p.m. Saturday.

On Saturday and Sunday, so many people called the police department about debris that it strained resources and manpower, Welte said.

Now, finders should only call the police about plane debris if the item is sizable — think at least as big as a computer monitor — or has an identifying feature, like a serial or part number, or text that reads, “United,” Welte said.

“I’m assuming people are going to continue to find things, as they go out into their yards and work this spring,” Welte said.

Many of the larger parts were picked up Saturday night by investigators with the NTSB, she added, as they mounted a hurried effort to collect the debris before a winter storm moved in that evening.

The pieces the police department now has were discovered after that initial effort and are generally smaller, she said, adding police are assuming the parts that have been turned in are legitimate pieces of the plane.