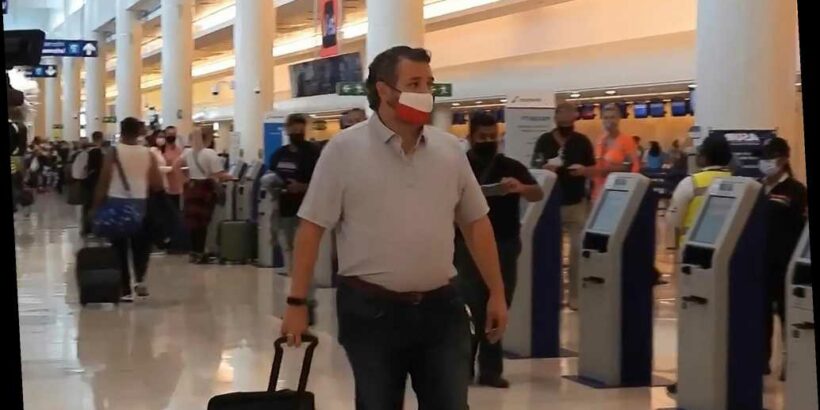 The cost of Ted Cruz family trip to Cancun just went up: Kids will have to quarantine

Payback’s a beach: Chris Christie has no sympathy for ‘unlikeable’ Ted Cruz

United Airlines is investigating the leak of Sen. Ted Cruz’s revised itinerary — in which he returned to Texas earlier than planned from Cancun, Mexico, amid outrage about his trip during the winter storm, according to a report.

The Republican lawmaker at first claimed he was just escorting his daughters, ages 12 and 10, on the Wednesday evening flight and planned to return immediately to the Lone Star State.

He flew back to Houston Thursday, after a photograph of him boarding the flight sparked a firestorm, and later admitted that he planned to stay there with his family until Saturday.

Cruz’s about-face came as text messages from his wife, Heidi, revealed they told pals they were abandoning the “FREEZING” weather and heading to the fancy Ritz-Carlton resort.

Edward Russell, a reporter at travel news outlet Skift, said on Twitter on Thursday that he had talked to a source at United who confirmed Cruz had “rebooked his flight back to Houston from Cancun for this afternoon at around 6 a.m. today (Thursday). He was originally scheduled to return on Saturday,” according to Politico.

Now, the airline said it is investigating the leak — and it could lead to terminations.

“It’s against United’s policies to share personal information about our customers and we are investigating this incident,” a United executive told Politico in a statement, adding that the leaker could be fired.

The airline honcho told the outlet that no options are “off the table,” but that it depends on the outcome of the probe and if they definitively find the worker who leaked the information.

“That guy claiming to have a United source is putting that source in danger of being fired with his tweet. Airlines track every single keystroke of their agents or anyone else who has access to flight records,” journalist Yashar Ali said in a tweet in response to the leak, Politico reported.

Meanwhile, Sara Nelson, president of the Association of Flight Attendants, defended the leak, and urged United to drop the investigation, HuffPost reported.

“Perspective: whoever the ‘leak’ is, she/he/they have over 10k @united colleagues & families in TX who are freezing while their US Senator skips town & then tries to lie about it,” she said in a tweet.

“@tedcruz is not a ‘customer,’ he’s a public servant who has lied too many times. WE’RE ALL THE LEAK,” she said, adding, “Hey United, #WeAreAllTheLeak.”