The United Nations has imposed sanctions against six human traffickers operating inside Libya.

The men, all aged in their 30s and leaders of criminal networks, have amassed vast fortunes buying and selling humans in northern Africa, the UN said.

Incredibly, one of them is actually a commander with the Libya Coast Guard which is supposed to be working to stop the flow of migrants across the Mediterranean.

The Netherlands, which led the effort to list the men, said it is the first time that human rights violators have been sanctioned by the UN. 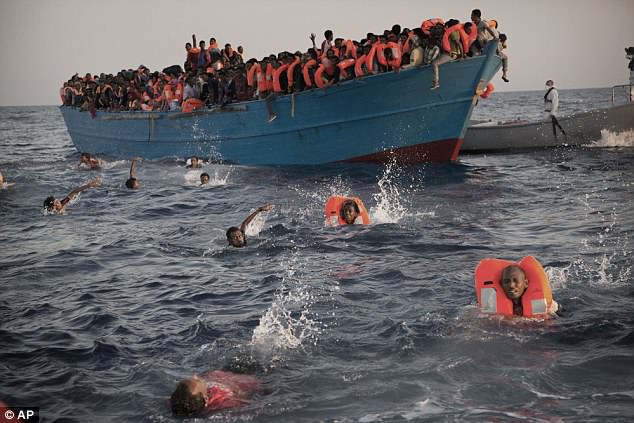 The men are now subject to asset freezes and travel bans.

The first to be listed was Mus’ab Abu-Qarin, described by the sanctions committee as ‘a central actor in human trafficking and migrant smuggling activities’ whose network covers ‘Libya, European destinations, sub-Saharan countries for the recruitment of migrants and Arab countries for the financial sector.’

The second was Mohammed Kachlaf, described by the sanctions committee as head of a militia in Zawiya in western Libya that controls a refinery which is ‘a central hub of migrant smuggling operations.’

It says Kachlaf also controls detention centers and called his network ‘one of the most dominant in the field of smuggling and the exploitation of migrants in Libya.’

Another is Abd Al Rahman Al-Milad, described by the sanctions committee as head of the regional Coast Guard unit in Zawiya ‘that is consistently linked with violence against migrants and other human smugglers.’

Ermias Ghermay was among those sanctioned, and was identified by multiple sources ‘as one of the most important sub-Saharan actors involved in the illicit trafficking of migrants in Libya.’

The UN committee called him ‘a leader of a transnational network responsible for trafficking and smuggling tens of thousands of migrants, mainly from the Horn of Africa to the coast of Libya and onwards to destination countries in Europe and the United States.’

The committee said he has detention camps where serious human rights abuses are reportedly being committed, and an Italian arrest warrant against him for smuggling thousands of migrants under ‘inhumane’ conditions and a Oct. 13, 2013 shipwreck near Lampedusa in which 266 people died. 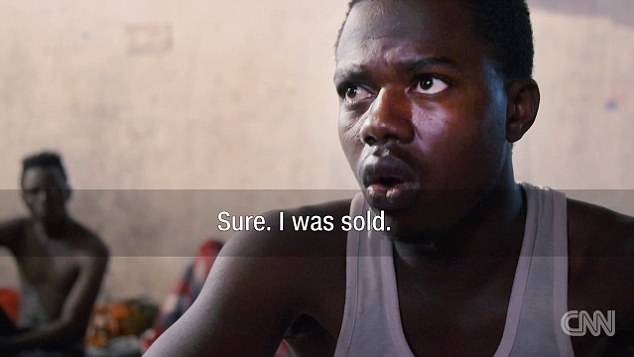 The men have amassed vast fortunes buying and selling people in northern Africa, the UN says. Sanctions followed on from a CNN report exposing slave markets in Libya

Another is Fitiwi Abdelrazak, described by the committee as leader ‘of a transnational network responsible for trafficking and smuggling tens of thousands of migrants, mainly from the Horn of Africa to the coast of Libya and onwards to destination countries in Europe and the United States.’

It said he has been described, including in several criminal investigations, ‘as one of the top-level actors responsible for the exploitation and abuse of a large number of migrants in Libya.’

The committee said Abdelrazak ‘has accumulated immense wealth through the illicit trafficking of migrants.’

He is linked to at least two fatal shipwrecks between April 2014 and July 2014.

Ahmad Oumar Al-Dabbashi, another of those sanctioned, was described by the committee as commander of the Anas al-Dabbashi militia active around Zawiya.

It said ‘there is extensive evidence that Al-Dabbashi’s militia has been directly involved in the illicit trafficking and smuggling of migrants, and that his militia controls departure areas for migrants, camps, safe houses and boats.’

The committee said the militia has longstanding links with the Islamic State group in North Africa.

Officials had hoped to sanction the men back in May but Russia placed a temporary hold on the motion, before removing it on Thursday.

Dutch Foreign Minister Stef Blok said his country wants to use its Security Council seat ‘to improve the lives of refugees and migrants in Libya and prevent them from making the dangerous journey across the Mediterranean.’

The Netherlands Mission said its aim is ‘to destroy the business model of human trafficking networks and tackle the appalling human rights situation of migrants that were sold as slaves on the markets of Libya.’

There was widespread global outrage after video footage was broadcast on CNN last November showing the auction and sale of migrant men as slaves in Libya.

In early December, the Security Council condemned the sale of African migrants into slavery in Libya as ‘heinous abuses of human rights’ that may constitute crimes against humanity.

The country subsequently slid into chaos, with rival governments and parliaments based in the western and eastern regions, each backed by different militias.

Last December, the African Union said between 400,000 and 700,000 migrants were thought to be in more than 40 detention camps across Libya, often under inhumane conditions.

The International Organization of Migration recorded more than 3,100 deaths among migrants making the Mediterranean crossing in 2017.

US Ambassador Nikki Haley said images of slave auctions had ‘shocked out conscience’ that sanctions ‘send a strong message that the international community is united in seeking accountability for perpetrators.’

Haley said blacklisting the six men is ‘part of a larger international effort to seek accountability for those involved in migrant smuggling and trafficking that threatens the peace, security, or stability of Libya.’

In selecting the six men, she said there was ‘close collaboration’ between the U.S., Netherlands, France, Britain and Germany.