BRITS on Universal Credit will spiral into more debt when switching over to the new benefits system, MPs have warned.

The powerful Work and Pensions Committee warned today that the 'advance payments' offered to keep claimants going unto their first payment were not working.

MPs said the DWP were leaving claimants "swimming against a tide of unmanageable repayments" which "pile debt upon debt, trapping people in a downward spiral of debt and hardship".

Brits going onto the new system have to currently wait five weeks before their first payment comes through – though Amber Rudd has hinted she could cut that.

However, the DWP say that advance payments are on offer for anyone who can't wait that long without cash, but that slashes payments for the rest of the year as a result as the claimant has to pay it back.

Committee boss Frank Field said it was "irresponsible" for the Government to say the advance payments are "not a loan" as they push Brits into taking on more debt from the very beginning.

He's written to the DWP boss in charge to demand answers.

Citizens Advance said that there were "widespread affordability issues" with the repayments system.

But ministers have agreed to review the maximum amount it takes back from Brits on Universal Credit every month to make sure they are "sustainable".

Philip Hammond announced last year he would change amount the top paid back from 40 per cent to 30 per cent from next year, and extend repayment schedules over an extra six months.

The news comes after The Sun launched a campaign to Make Universal Credit Work.

One million people are already receiving it and by the time the system is fully rolled out in 2023, nearly 7 million will be on it.

But there are big problems with the flagship new system – it takes 5 weeks to get the first payment and it could leave some families worse off by thousands of pounds a year.

And while working families can claim back up to 85 per cent of their childcare costs, they must find the money to pay for childcare upfront – we’ve heard of families waiting up to 6 months for the money.

Working parents across the country told us they’ve been unable to take on more hours – or have even turned down better paid jobs or more hours because of the amount they get their benefits cut.

It’s time to Make Universal Credit work. We want the government to:

Together, these changes will help Make Universal Credit Work.

We are urging ministers to take action now before it's too late – and slash the five week wait which is plunging Brits into even more debt and hardship.

We've heard harrowing tales of Brits who can't afford to feed their children and have have even had to give up their homes after being unable to pay their debts on the new benefits system.

Emma Revie, Chief Executive of the Trussell Trust said: "Universal Credit should be fighting poverty, not forcing people to food banks. But waiting at least five weeks for a first payment is leaving many people without enough money to cover the basics.

"Applying for some or all of your first Universal Credit payment to be paid early means this amount will be taken from your payments when they start coming through, so people are put between a rock and a hard place: no money now or not enough money later?

This isn’t right – the best way to make sure no one needs a foodbank while waiting for Universal Credit is for the government to end the five week wait."

Earlier this week a report from Christians Against Poverty said the new system was trapping Brits in debt and forcing them to foodbanks to pay it back. 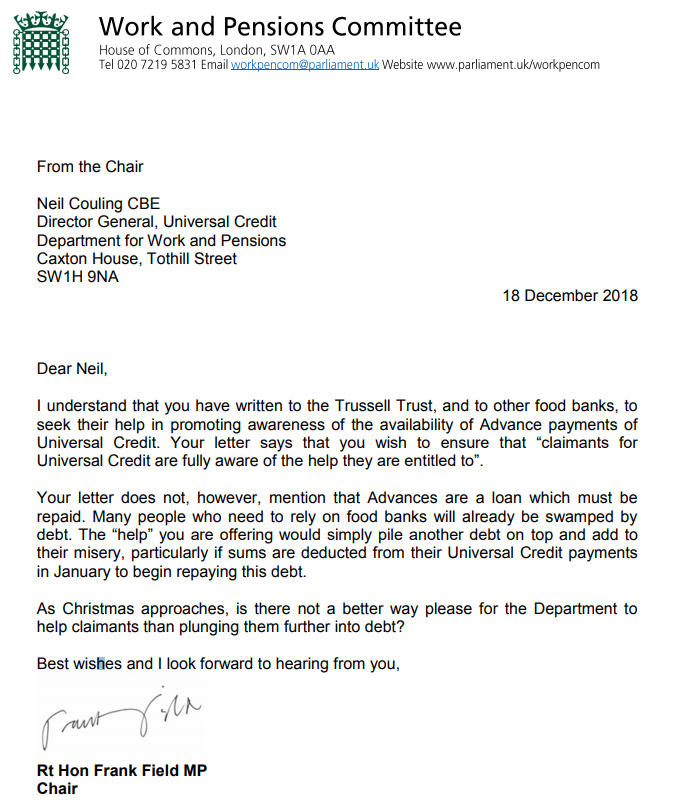 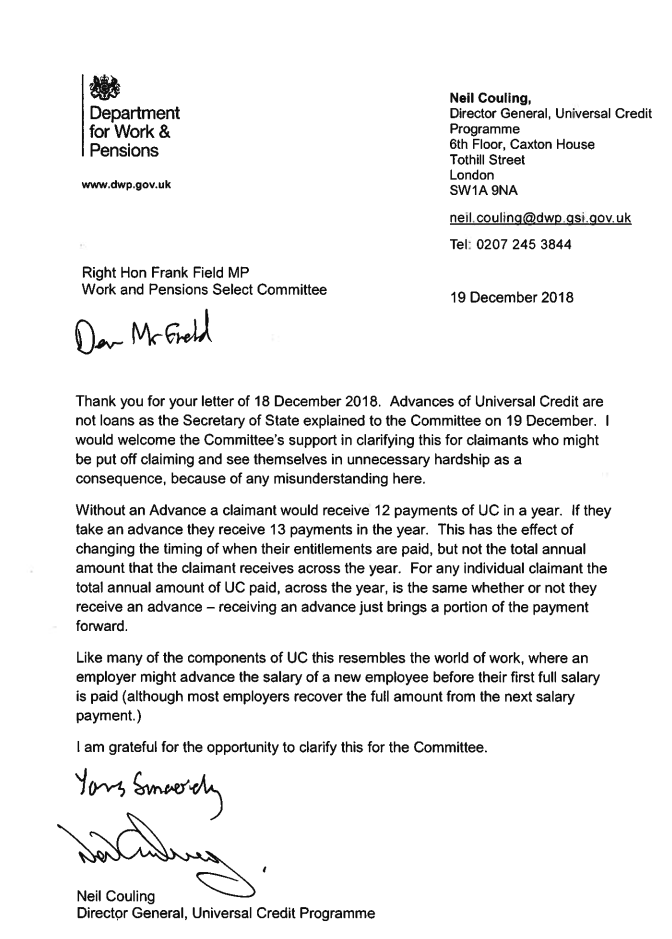 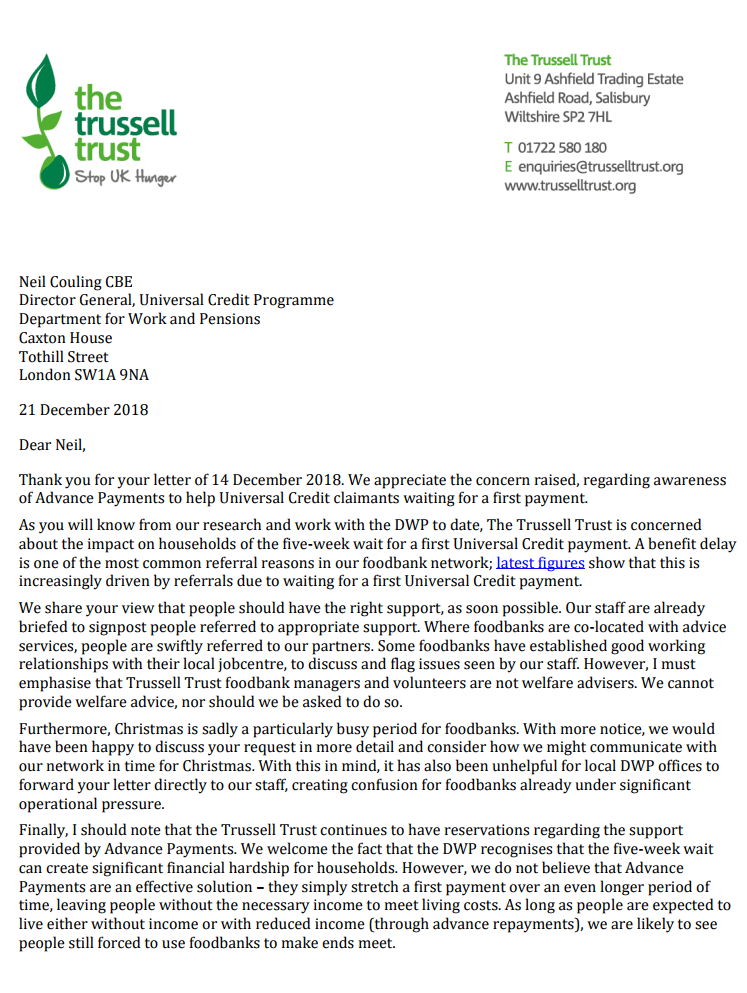 In letters between the Universal Credit Director Neil Couling, Committee boss Frank Field and Trussell Trust CEO Emma Revie it was revealed that the Department had asked foodbanks for help in "promoting Universal Credit Advance Payments" who were struggling with the five-week wait for benefits cash.

MP Mr Field said he was "very concerned" to hear that the advice didn't include the fact that the advances are a loan and must be repaid.

"The “help” you are offering would simply pile another debt on top and add to their misery, particularly if sums are deducted from their Universal Credit payments in January to begin repaying this debt," he said.

"Is there not a better way please for the Department to help claimants than plubging them further into debt?"

But further letters from the Trussell Trust showed that the foodbanks didn't want to promote the so-called advance payments.

"Trussell Trust staff and volunteers are not welfare advsers, and cannot be expected to fill this gap," Ms Revie blasted.

She went on to list a string of problems she had with promoting the money to claimants, saying many people found them "unhelpful, too little to cover costs or unaffordable to repay".

"A genuine solution would be to address the hardship caused by the design principle of having a five-week wait for a first Universal Credit payment."

A DWP spokesperson said: "Advance payments are interest free and help people who need immediate financial support. They are generally repaid over the following 12 months, but work coaches can pause or reduce repayments to ensure they’re manageable. Jobcentres also provide budgeting support for people who struggle to manage their money.

"We have announced that we will be changing the Universal Support programme from April. Citizens Advice will now help vulnerable Universal Credit claimants make their claim."

IF you're experiencing trouble applying for your Universal Credit, or the payments just don't cover costs, here are your options:

Apply for an advance – Claimants are able to get some cash within five days rather than waiting weeks for their first payment. But it's a loan which means the repayments will be automatically deducted from your future Universal Credit pay out.

Alternative Payment Arrangements – If you're falling behind on rent, you or your landlord may be able to apply for an APA which will get your payment sent directly to your landlord. You might also be able to change your payments to get them more frequently, or you can split the payments if you're part of a couple.

Budgeting Advance – You may be able to get help from the government to help with emergency household costs of up to £348 if you're single, £464 if you're part of a couple or £812 if you have children. These are only in cases like your cooker breaking down or for help getting a job. You'll have to repay the advance through your regular Universal Credit payments. You'll still have to repay the loan, even if you stop claiming for Universal Credit.

Foodbanks – If you're really hard up and struggling to buy food and toiletries, you can find your local foodbank who will provide you with help for free. You can find your nearest one on the Trussell Trust website.