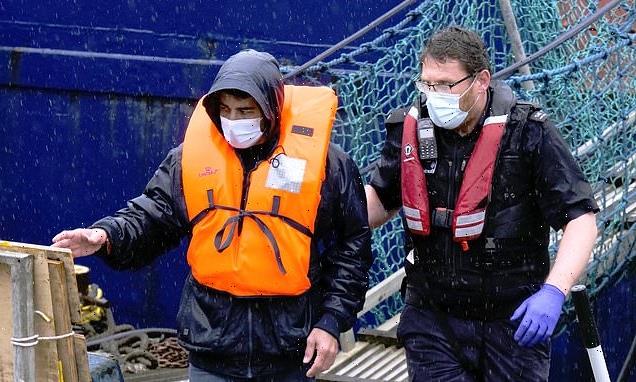 Around 100 migrants are believed to have crossed the Channel today despite downpours of rain.

Border Force intercepted the first boat of the day at around 7.30am.

The first boat contained approximately 20 men believed to be from the Middle East. They were brought to Dover on the Border Force cutter Speedwell. 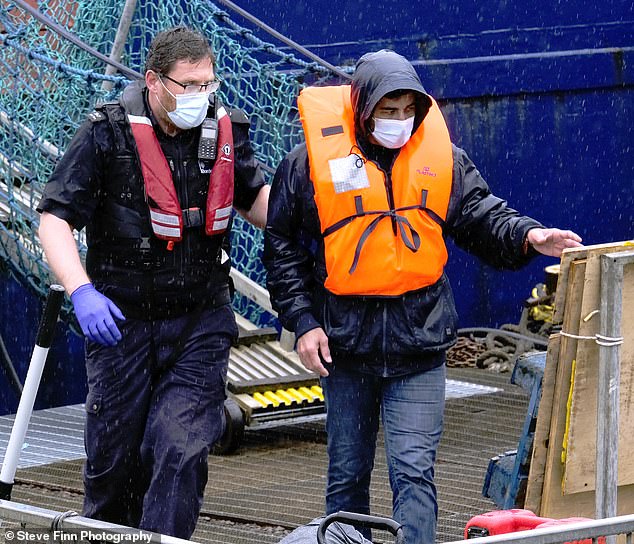 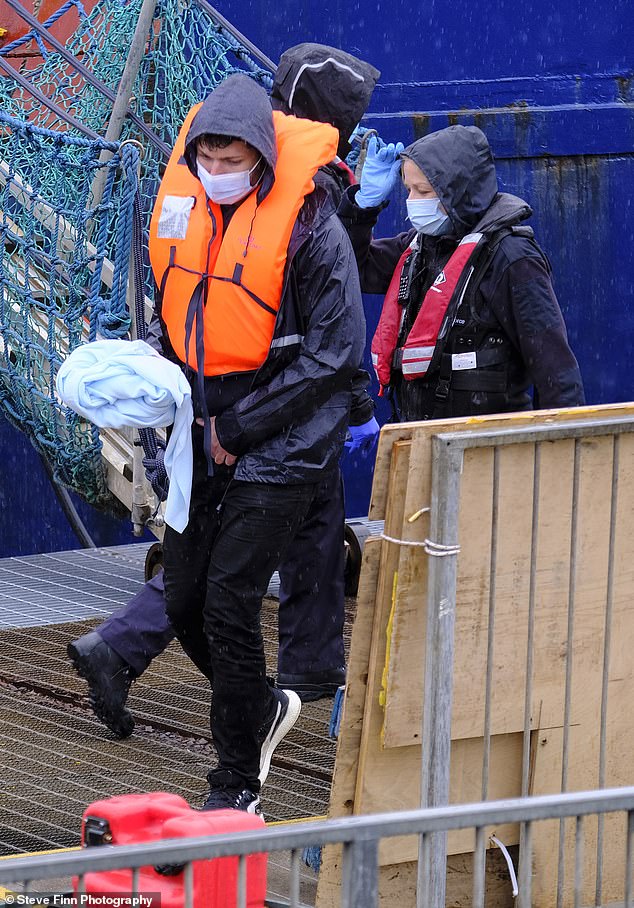 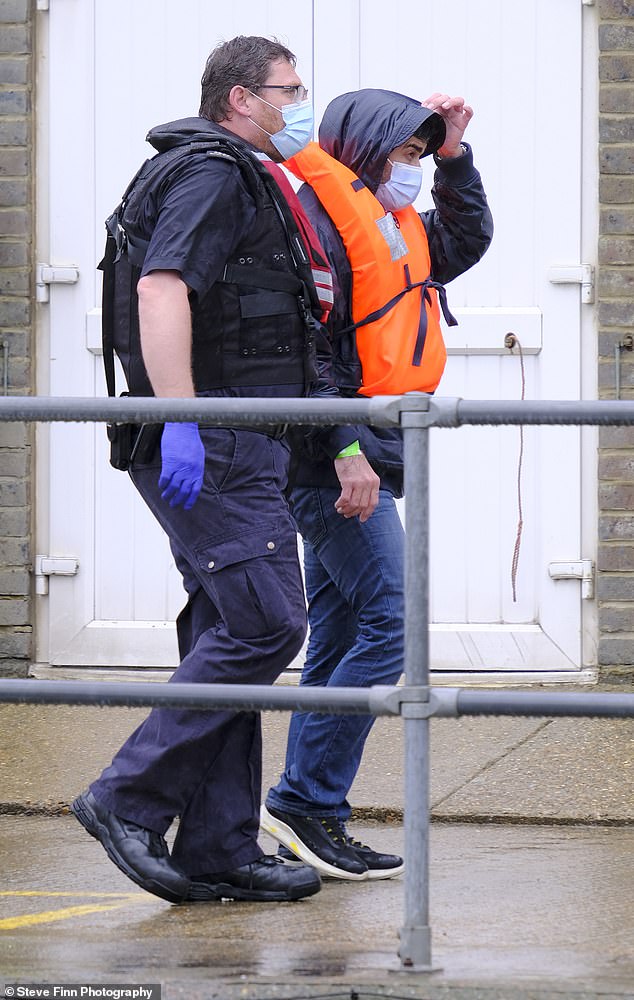 More were seen huddling blankets and wearing face masks on the back of Border Force vessel Hunter around 9.30am.

Immigration Enforcement officers escorted them up the gangway at Dover Marina, Kent for processing.

An additional 15 migrants also reportedly managed to land their boat on a beach in Dungeness, Kent.

They were seen next to a police van with officers keeping watch.

Speedwell continued to taxi migrants into the harbour as daily figures were again expected to surpass 100.

The Home Office is yet to confirm how many migrants successfully crossed the Channel today. 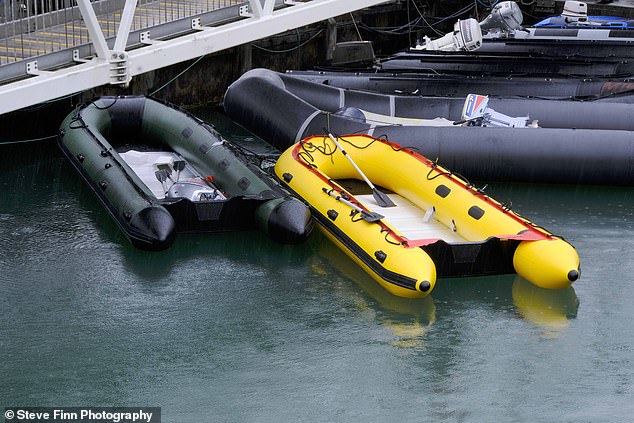 These two inflatables, pictured, were used by some of the migrants to cross the channel 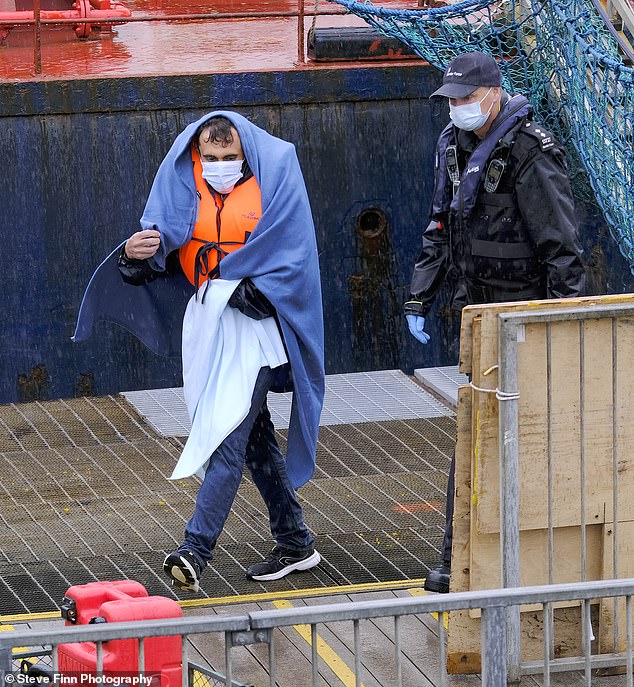 It comes after 186 migrants arrived on Tuesday in one of the busiest days for small boat crossings of the year so far.

It was the second highest daily figure for 2021 after 209 made the treacherous journey in nine boats on April 28.

May is on track to be the busiest month of the year so far with 636 migrants crossing in the first 12 days compared with March’s record-breaking month of 831.

The first arrivals were seen huddled on the back of Border Force cutter Speedwell at around 6.30am with their large grey rigid hulled inflatable boat in tow.

The men and women, many appearing to be Vietnamese, all wore orange lifejackets and face masks as they disembarked at Dover Marina, Kent for processing.

More men were brought in around 9am on smaller Border Force vessels due to the size of the large RHIB used. 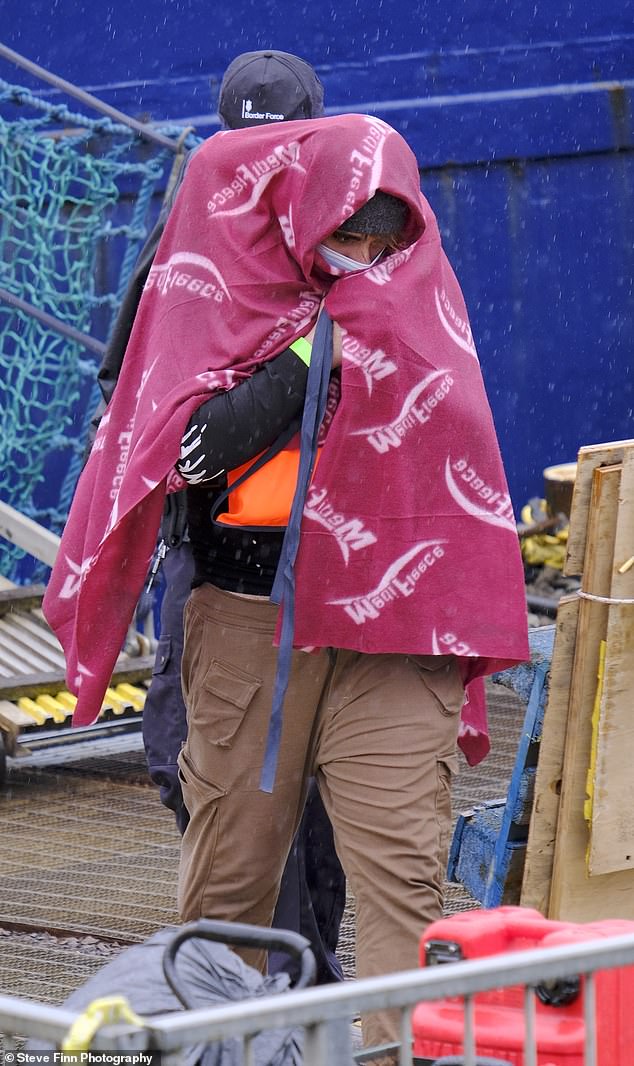 Children under the age of 10 wearing thick winter coats were among a group brought in around 11am.

The last boat carrying almost 30 migrants was intercepted late in the day and brought in for processing around 5pm.

French authorities also prevented 96 migrants from making the dangerous voyage in seven boats, according to the Home Office.

At around 7am, 29 migrants including five women were dropped off at Dunkirk after their boat was discovered stranded on the riprap of the breakwater near Malo-les-Bains dyke

Four migrants in difficulty were also rescued by the Notre-Dame-de-Risban SNSM lifeboat eight miles off Calais. They were returned shortly after 9.30am.

A total of 2,744 migrants have arrived this year so far. 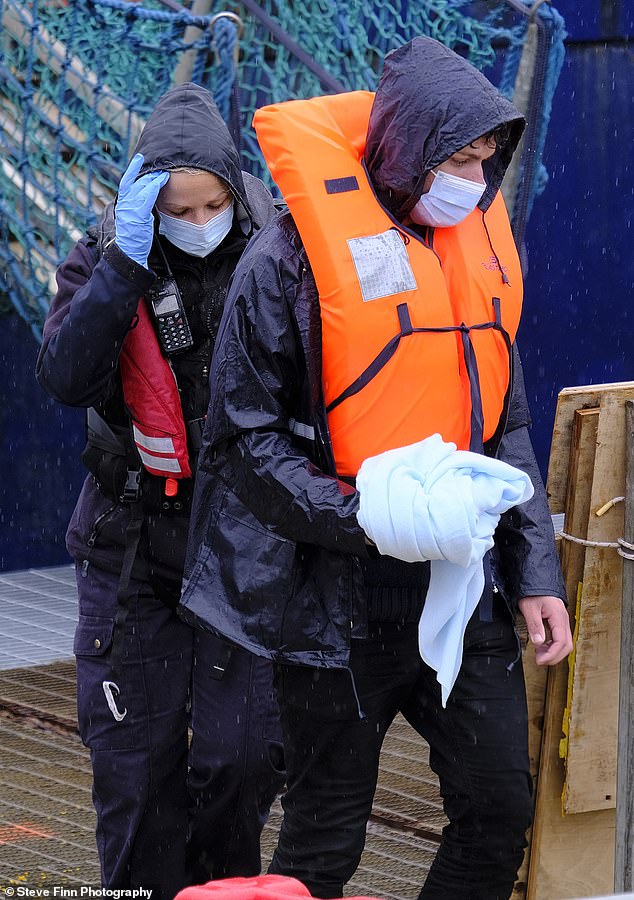 French authorities also prevented 96 migrants from making the dangerous voyage in seven boats, according to the Home Office