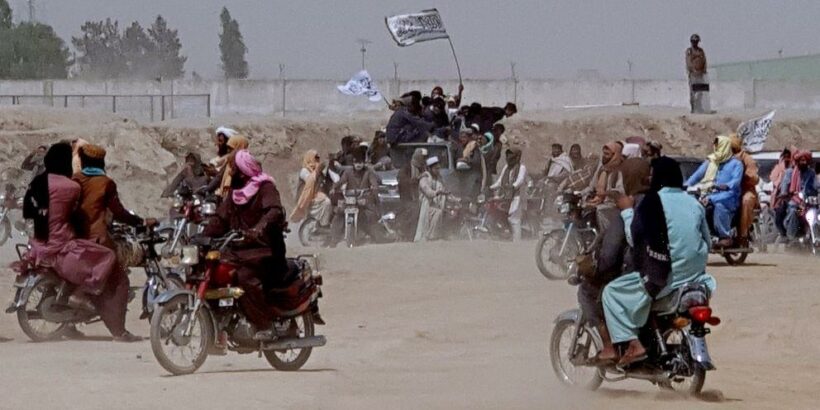 ISLAMABAD — A Taliban surge has put the insurgent force in control of key border posts, opened up fresh sources of revenue and rattled many of Afghanistan’s neighbors.

In the Uzbek capital of Tashkent, a two-day regional meeting that begins Thursday was originally supposed to deal with “connectivity” in South and Central Asia, encouraging trade ties and transport issues. But it has morphed into a high-level gathering of senior U.S., Russian and EU officials that most certainly will be consumed with Afghanistan and the impact of the rapidly advancing Taliban.

In recent weeks, the Taliban have gained control of key border posts with neighbors Iran, Pakistan, Uzbekistan and Tajikistan.

In many instances, Afghanistan’s security forces and military have put up little to no resistance, after often being left without resupplies or reinforcements. Two weeks ago, more than 1,000 Afghan military men fled across the border into Tajikistan. The Taliban did not pursue them.

The Taliban have also issued statements, including from their senior leader Mullah Abdul Ghani Baradar, who negotiated last year’s deal with the U.S., assuring Afghanistan’s neighbors they have nothing to fear from the insurgent movement.

The Taliban surge comes as the U.S. and NATO all but wind up their nearly 20 years in Afghanistan. Earlier this week, the U.S. Central Command said the American withdrawal was 95% complete, after President Joe Biden’s mid-April announcement that America was ending the “forever war.”

The goals of the gathering are now unclear. Rather than the original agenda of highways and railroads, the powers are likely looking for some regional consensus over what a final peace can look like and action from all the players to push that through. The fear is not only over Taliban gains; without a peace deal, Afghanistan’s many warlords may turn to a new, destructive civil war among themselves to seek power or preserve their interests.

“We call on countries of the region and the broader international community to play a constructive role in support of the Afghan peace process,” Borrell said, adding he will make a personal plea at the Tashkent conference.

The conference gathers many of Afghanistan’s neighbors, including Russia, China, Uzbekistan and Tajikistan. Several of them have been accused of backing factions inside Afghanistan and fomenting violence for their own gains. They also have concerns about militant groups inside Afghanistan that threaten them, like the Islamic Movement of Uzbekistan and the Islamic State group. The Taliban are seen by many, including the U.S., as useful bulwarks against those groups.

In Tashkent, Afghanistan’s President Ashraf Ghani is expected to meet Pakistan’s Prime Minister Imran Khan on the sidelines. At the same time, Pakistan will be hosting a meeting in Islamabad with the Afghan political leadership, apparently aiming to heal regional rifts. That meeting may begin a early as Friday.

The relationship between the two countries is fraught with suspicion and heated mutual accusations.

Ghani has accused Islamabad of fomenting violence in Afghanistan because the Taliban leadership is headquartered in Pakistan. The Taliban also often use Afghan refugee camps in Pakistan for rest and relaxation. Many Taliban leaders also have their families in Pakistan’s key cities of Karachi on the Arabia Sea and Quetta in southwestern Baluchistan province, where the insurgent movement also brings its wounded for treatment.

Pakistan, however, says it has used its influence with the Taliban to get them to the negotiation table, even as it says that influence is waning as the insurgents gain more territory inside Afghanistan.

Pakistan also accuses Afghanistan of harboring the Pakistani Taliban — the anti-Pakistan militant Tehreek-e-Taliban group, which is separate from the Afghan Taliban and which stepped up its attacks against Pakistan’s military in recent months. Pakistan also blames Afghanistan’s intelligence agency of aiding the Pakistani Taliban as well as the Baluchistan Liberation Army, a secessionist movement blamed for attacks against Chinese interests in Pakistan.

The volatility of the regional players makes the relationships often a delicate balance.

“The key regional players all share a desire for a more stable Afghanistan, and they back the peace process. But the risk is that they will work at cross purposes by supporting competing factions within Afghanistan,” said Michael Kugelman, deputy director of the Asia Program at the U.S.-based Wilson Center.

“And at the end of the day, while the Taliban is happy to hear out the Chinese, the Russians, and the Iranians, it has the luxury of shrugging off what they say about easing violence, redirecting their full attention to the battlefield, and finishing off a fight they believe they’re winning.”