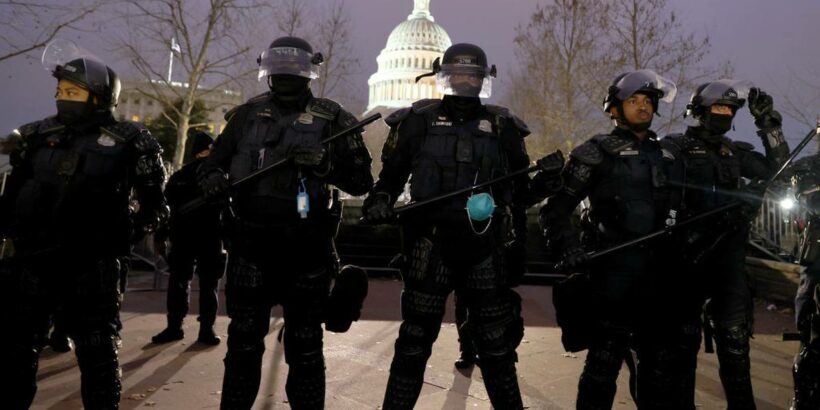 KEY POINTS:
• A woman has died of a gunshot wound and police officers have been injured after supporters of President Donald Trump stormed the US Capitol Building.
• President-elect Joe Biden called on Trump to demand an end to the seige and in a message released on Twitter, Trump told protesters: “Go home, we love you”.
• The US Capitol Building is now secure and lawmakers are eager to continue with certification of the Electoral College.
• Tear gas was deployed after mobs broke in and protesters were seen sitting at the desk of Speaker of the House Nancy Pelosi. Members of the House and media took cover in the chambers.
• Democrat Jon Ossoff has won his Senate runoff race in Georgia against David Perdue, giving Democrats effective control of the Senate and allowing Biden to pursue his agenda.

The US Capitol is now “secure” after being mobbed and occupied by violent Trump supporters as a 12-hour curfew in Washington DC comes into effect.

CNN reports that the police’s sergeant at arms announced to lawmakers, who are being held in an undisclosed location, that the Capitol is now secure.

A woman who was shot during the violence has died of her injuries, NBC reports.

Police have been moving rioters away from the front of the Capitol Building and reporters witnessed chemical irritants and stun grenades being used to disperse the crowd.

The curfew will be in effect until 6 am Thursday (Washington time).

“If you are found to be in violation of the curfew, police will be required to take action,” Contee said.

US President Donald Trump earlier called on his mob of supporters who invaded the US Capitol building to “go home in peace”.

His Twitter message followed a televised appearance by President-elect Joe Biden who urged Trump to go on television and “demand an end to this seige”.

Biden said the protesters do not represent America and that the invasion of the Capitol “borders on chaos, borders on sedition and it must end now”.

The invasion of the Capitol Building took place as results from the Georgia Senate run-offs confirmed two Democrats had been elected, giving Democrats effective control of the legislative branch.

Trump supporters angry with the presidential election outcome stormed Capitol Hill in a chaotic protest aimed at thwarting the peaceful transfer of power, forcing lawmakers to be rushed from the building and interrupting Republican challenges to Biden’s Electoral College victory.

The ordinarily mundane procedure of Congress certifying a new president was always going to be extraordinary, with Republican supporters of Trump vowing to challenge the results of an election that they have baselessly insisted was reversed by fraud. But the “Trump March” protest soon overshadowed everything.

In raucous, out-of-control scenes, protesters fought past police and breached the Capitol Building, shouting and waving Trump and American flags as they marched through the halls.

The protesters abruptly interrupted the congressional proceedings in an eerie scene that featured official warnings directing people to duck under their seats for cover and put on gas masks after tear gas was used and police barricaded the House of Representatives.

US Representative for Michigan Dan Kildee wrote on social media: “We have been instructed to lie down on the floor and put on our gas masks. Chamber security and Capitol Police have their guns drawn as protesters bang on the front door of the chamber.”

“This is not a protest. This is an attack on America,” he said.

Lawmakers paused their vote on certifying Biden’s Electoral College win and evacuated the House of Representatives.

Protestors continued trying to break down the door of the legislative chamber.

While police guarded the House of Representatives, protesters took over other parts of the Capitol Building.

As the situation devolved, President Donald Trump called on his supporters to remain peaceful, writing on Twitter: “No violence! Remember, WE are the Party of Law & Order”.

The siege has been almost universally condemned by lawmakers and officials.

Republican Senator Mitt Romney reportedly excoriated his colleagues in the Senate as chaos erupted in the chamber, the Huffington Post reported.

“The President undermined American democracy baselessly for months. As a result, he’s culpable for this siege, and an utter disgrace,” Bossert wrote on Twitter.

Earlier in the day, in a wide-ranging speech, President Donald Trump denounced the November presidential election as a fraud and vowed to never concede. The President said he was winning the race until “explosions of bulls***” turned the results in Biden’s favour.

Trump urged the media to turn their cameras on the “hundreds of thousands” of supporters.

“We will never give up, we will never concede,” he said, to cheers and hollering. “We will stop the steal.

“Our country has had enough, we will not take it any more.”

The speech prompted protesters to rush towards the Capitol. DC police earlier stood guard against the charging crowd but could not hold back the tide.

Hundreds scaled and kicked aside the barricades, yelling “forward!!” as they ran upward.

The Hill also reported a pipe bomb was found at Republican National Committee (RNC), just blocks away from the US Capitol, and the nearby headquarters of the Democratic National Committee (DNC) was evacuated after a suspicious package was discovered there.

The pipe bomb at the RNC was destroyed by a bomb squad, and the suspicious package at the DNC has yet to be identified.

Violence is not contained to the capital, with protests erupting around the country.

Trump supporters in Los Angeles have been seen clashing with counter protesters.

Congress yet to affirm Biden’s win

Before the siege, Vice President Mike Pence and the Members of the Senate were earlier admitted into the House Chamber to meet with the House of Representatives in a Joint Session to certify the Electoral College ballot count.

Pence had already issued a statement by the time the Congress met, declaring he would not intervene in the electoral count and killing hope of Congress overturning Biden’s win.

Starting with the state of Alabama, the tellers began announcing the results of the Electoral College balloting, but this was halted when Republicans objected to the election tally in Arizona.

The objection to the Arizona count forces two hours of debate in the House and Senate, sending lawmakers away to separate deliberations.

All challenges are ultimately doomed to fail, since both chambers of the Congress would need to sustain any objection, and Democrats control the House of Representatives.

“All Vice President Pence has to do is send it back to the states to recertify and we become president and you are the happiest people.

“If he doesn’t, then that will be a sad day for our country.”

However, Pence said he would refuse to do so, saying he could not claim “unilateral authority” to reject electoral votes that would make Biden president.

Pence’s statement said it was “my considered judgment that my oath to support and defend the Constitution constrains me from claiming unilateral authority to determine which electoral votes should be counted and which should not”.

Democrats have now won both Georgia Senate seats — and with them, the US Senate majority, serving Trump a stunning defeat in his last days in office.

Their success is a symbol of a striking shift in Georgia’s politics as the swelling number of diverse, college-educated voters flex their power in the heart of the Deep South.

In his speech today, Trump labelled the Georgia runoff elections a “set up”, baselessly alleging that voting machines manipulated the results.