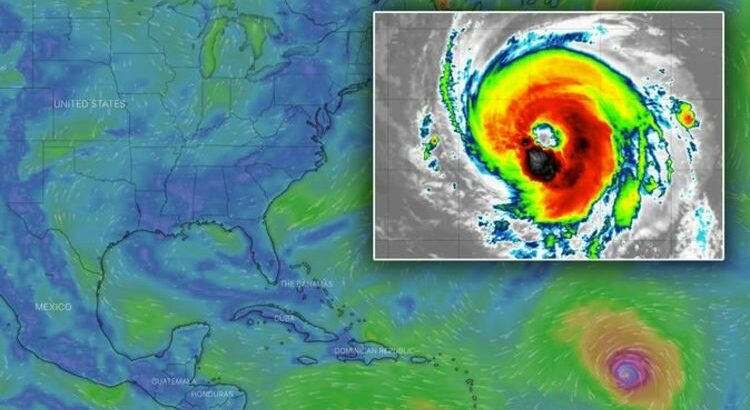 US scientists are monitoring Hurricane Larry, which is currently gaining strength over the Atlantic Ocean, after it became a Category 3 storm on Saturday morning (September 4). Hurricane experts have now warned Larry is a “very large and powerful hurricane”.

The storm strengthened into a major hurricane on Sunday August 29, before eventually reaching the Louisiana coast that very same day.

Wind speeds of 150mph were recorded at Port Fourchon, with a pressure of 930mb.

It was the fifth most powerful hurricane to ever hit the US, causing tens of billions of dollars in damage.

But, meteorologists have now started tracking Hurricane Larry; the third major hurricane in the Atlantic this year.

It’s currently generating wind speeds of almost 125mph, and has already been designated a Category 3 storm.

Larry is currently between the west coast of Africa and Puerto Rico, so there’s no immediate threat to any major land.

However, it could eventually cause large waves and dangerous riptides along the US east coast by the end of next week.

The National Hurricane Center said: “Swells generated by Larry are expected to reach the Lesser Antilles on Sunday, and will continue to spread westward to portions of the Greater Antilles, the Bahamas, and Bermuda Monday and Tuesday.

“These swells are likely to cause life-threatening surf and rip current conditions.”

“Category 4 is in the forecast starting tonight for the next few days.

“Nice to actually have one well east of the CONUS [continental United States] for once.”

Meanwhile, at least 58 people have died in the US following the arrival of Hurricane Ida.

It took a full nine hours for Ida to recede into a Category 2 tropical storm after making landfall.

Storm surges of up to 10 feet were observed in some parts of the south coast – although the actual height was likely to be much larger.

As the storm spread across the northeast of the US, record levels of rainfall were reported.

Up to 17 inches of rain was recorded just west of New Orleans, while numerous flash flood warnings were issued on the east coast.

Ida also caused power outages for about 30 percent of Louisiana, as well as a quarter of Mississippi.