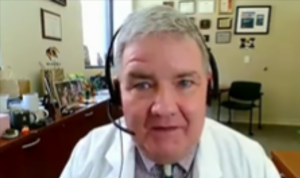 Mr Corkins discussed how he had treated two infant patients in Memphis, he claimed both were suffering from the effects of dehydration.

The Pediatric specialist explained that he had never seen a crisis like this before.

He then went on to explain that doctors can only help with short term solutions to the lack of nutrients infants were suffering from due to the shortages.

Mr Corkins recommended IV drips in order to get nutrients straight in the veins of those with symptoms of dehydration.

“A lack of formula has sent at least four babies to a children’s hospital in South Carolina.

“An Atlanta hospital is also treating children due to the shortage.

Would you describe this as a crisis?”

Mr Corkins told CBS News: “Absolutely, I have never seen anything like this.”

JUST IN: Have Your Say: Should Charles apologise to Canada? ‘It’s not enough’

Ms Yuccas added: “Dr Mark Corkins treated a toddler and a pre-schooler who were hospitalised at his facility in Memphis this week, they had specific nutritional needs.”

Mr Corkins added: “They come in dehydrated, you give them IV fluids and we can give them nutrition by vein, but that’s not a long-term solution.”

There are warnings for parents not to feed their children certain types of formula, such as Similac, Alimentum and EleCare as the FDA has recalled these products.

The FDA is investigating complaints of bacterial infections which have been affecting babies who have ingested those brands.

The FDA website says: “The FDA is working with Abbott Nutrition to better assess the impacts of the recall and understand the production capacity at other Abbott facilities that produce some of the impacted brands.

“We are also working with Abbott on safe resumption of production at the Sturgis, Michigan facility. As Abbott Nutrition was initiating its recall, the FDA intensified outreach to other infant formula manufacturers to inquire about their capacity and potential impacts.

“We will continue the discussion with Abbott Nutrition and other infant formula manufacturers and consider all tools available to support the supply of infant formula products.

A statement from the White House was released on Wednesday after Biden invoked the Defense Production Act when he addressed the crisis.

The White House statement said: “To speed up the import of infant formula and get more formula to stores as soon as possible, President Biden has directed the Department of Health and Human Services (HHS) and the U.S.

“Department of Agriculture (USDA) to use Department of Defense (DOD) commercial aircraft to pick up overseas infant formula that meets U.S. health and safety standards, so it can get to store shelves faster.

“DOD will use its contracts with commercial air cargo lines, as it did to move materials during the early months of the COVID pandemic, to transport products from manufacturing facilities abroad that have met Food and Drug Administration (FDA) safety standards.

“Bypassing regular air freighting routes will speed up the importation and distribution of formula and serve as an immediate support as manufacturers continue to ramp up production.”