White House thanks President Maduro’s ‘regime’ for releasing Joshua Holt but says policy on Venezuela will not change. 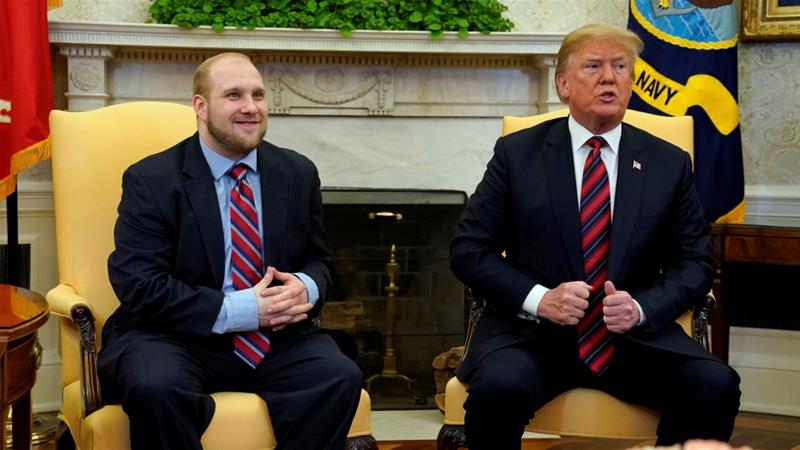 A United States citizen who was held in a Venezuelan prison for two years has met US President Donald Trump shortly after his release.

Joshua Holt was accused of being the CIA’s top spy in Latin America by senior Venezuelan officials but US officials, including Trump, say he was held “hostage”.

The 26-year-old travelled to the country to marry a Venezuelan woman he met online and to secure US visas for her and her two daughters.

At the meeting in the White House on Saturday, Trump called Holt “incredibly brave”.

“We saw what was happening inside of that prison. So you really have been very, very brave,” Trump said.

Holt said he was overwhelmed with gratitude for the support he received from the US government while behind bars.

“They were a very, very, very difficult two years,” he said. “I’m just so grateful for what you guys have done and for thinking about me, and caring about me, just a normal person.”

Holt’s arrest and imprisonment came amid deteriorating relations between the socialist government of President Nicolas Maduro and the US.

Maduro has blamed an “economic war” by the US for his country’s deteriorating finances and consequent social instability.

The US also refuses to recognise Maduro’s re-election as president in a vote last week that was largely boycotted by the opposition.

A White House spokesperson thanked the Maduro “regime” for releasing the “unjustly detained” Holt from detention, but said US foreign policy towards the country would not change.

“The Maduro regime must call free, fair, and transparent elections, consistent with its constitution,” a statement issued by the White House said.

“The election process that occurred on May 20 was illegitimate … The United States will continue to use all available tools and options to pressure the Maduro regime to abide by democratic norms.”