Mike Pompeo lashed out at Jeremy Corbyn alongside other UK and US leaders for continuing to support Venezuela’s President Nicolas Maduro. The US Secretary of State added “no leader in any country of democratic values’ should support the Venezuelan politician.Mr Pompeo visited Britain on Wednesday to meet Prime Minister Theresa May and give a speech on the “special” UK and US relationship. During a press conference, Town Hall’s Katie Pavlich asked: “I’d like to get your reaction to the endorsement of Maduro’s dictatorship by Labour leader Jeremy Corbyn.”

Mr Pompeo replied: “It is disgusting to see leaders in not only the United Kingdom but the United States as well, who continue to support the murderous dictator Maduro.

“And it is not in either of our country’s best interests for those leaders to continue to advocate on their behalf.

“The Venezuelan people have spoken through their constitutional mechanism, they have put Juan Guaido as their interim President, that he is the dually elected leader there and Maduro is on borrowed time.

“And to see American leaders or leaders from this country, continue to provide support and comfort to a regime that has created so much devastation, so much destruction. 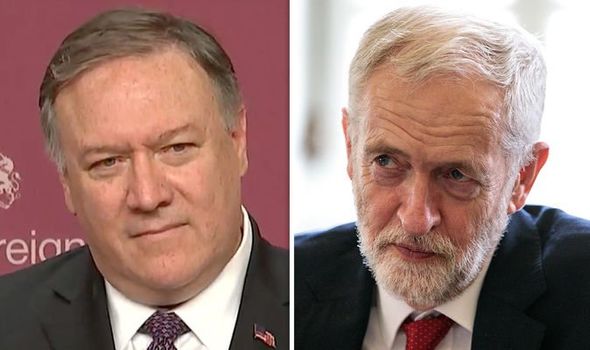 “I was in Colombia, I saw those countries who had to make choices about whether to feed their children on even days or odd days, that is a direct result of Nicolas Maduro.

“And no leader in any country of western democratic values ought to stand behind them.”

Mr Corbyn previously congratulated the socialist President during a live appearance on Venezuelan TV in April 2014, after the country devalued its currency and had its human rights record criticised by Amnesty International.

During the discussion, Mr Corbyn stated: “Congratulations to you Mr President and to the whole of the Venezuelan people.”

After unsuccessfully attempting to seize power as part of a military coup in 1992, Mr Chavez was elected as Venezuelan President in 1998 and held the position until his death in 2013.

In February 2013 Venezuela devalued its currency by nearly a third after suffering shortages, and in 2014 the country entered a recession.

During the conversation, Mr Corbyn referenced the role he played in welcoming Mr Chavez to London in 2006.

He commented: “During the visit of President Chavez to London, which was a huge demonstration of support, myself, Tony Benn and Ken Livingstone spoke extensively with President Chavez.

“The visit was an exceptional opportunity for us to welcome him to London.”