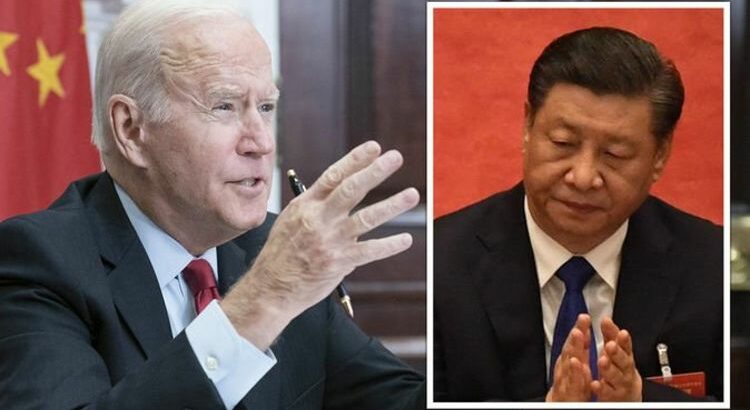 US: Expert discusses lawmakers visit with officials in Taiwan

Michigan Rep. Elissa Slotkin; Rep Mark Takano, a California Democrat; Sara Jacobs, another Democrat from California; Colin Allred, a Texas Democrat and Nancy Mace, a Republican from South Caroline were quickly condemned for their visit. China has been ramping up threats against Taiwan, which Beijing has always considered to be part of the People’s Republic. NBC News’ Josh Lederman said: “A big part of this is to show there’s bipartisan US support for Taiwan given the escalating tensions with China and the increasing effort by China to try to exert its own control and authority over Taiwan.

“But there’s also an economic component to this. We’ve heard from Congresswoman Elissa Slotkin saying on Twitter during the trip that the ‘auto industry’s largest supplier of microchip is here in Taiwan, so supply chain issues will most definitely be on the agenda.’

“She said she too received that message from the Chinese Embassy telling her to call off the trip.”

He continued: “So far in Taiwan, this trip has been received very warmly with the Taiwanese president saying, ‘it’s a pleasure to welcome our US friends to Taiwan.’

“Thanking those representatives and saying she looked forward to ‘producing discussions on how to further strengthen bilateral ties.’

“It’s probably no surprise the Chinese Foreign Ministry, they’re not happy at all about this.

“They’re warning efforts like this could really upset US-China relations and they are urging no more lawmakers to make visits to Taiwan.”

The Chinese foreign ministry said on Friday that China had lodged stern representations with the United States over the visit of five US lawmakers to Taiwan this week.

Zhao Lijian, a spokesman at the foreign ministry, said at a regular media briefing: “We advise some people in the United States not to play the Taiwan card, because it’s a bad card, and a losing hand.

Mr Zhao said the United States should abide by the one-China policy and immediately stop official exchanges with Taiwan in any form, and clear any obstacles for Sino-US relations in advance.

UK snow LIVE: Lorries stuck in heavy snow [LIVE]
France makes lame effort to bash Britain with a Brexit stick [REPORT]
Only by working together can we save migrant lives – EXPRESS COMMENT [OPINION]

The five members of the US House of Representatives arrived in Taiwan on Thursday night for a previously unannounced two-day trip, the second time in a month US lawmakers have visited.

As with the last visit, China’s military announced the patrols in the vicinity of the narrow and sensitive Taiwan Strait that separates the island from its giant neighbour.

The People’s Liberation Army’s Eastern Theatre Command said that on Friday it “organised naval and air forces to continue combat readiness police patrols in direction of the Taiwan Strait”.

“The relevant actions are necessary to deal with the current situation in the Taiwan Strait. Taiwan is part of China’s territory, and defending national sovereignty and territorial integrity is our military’s sacred mission.”