Secretary of State says move is in response to China’s policy of obstructing travel of diplomats, journalists to region. 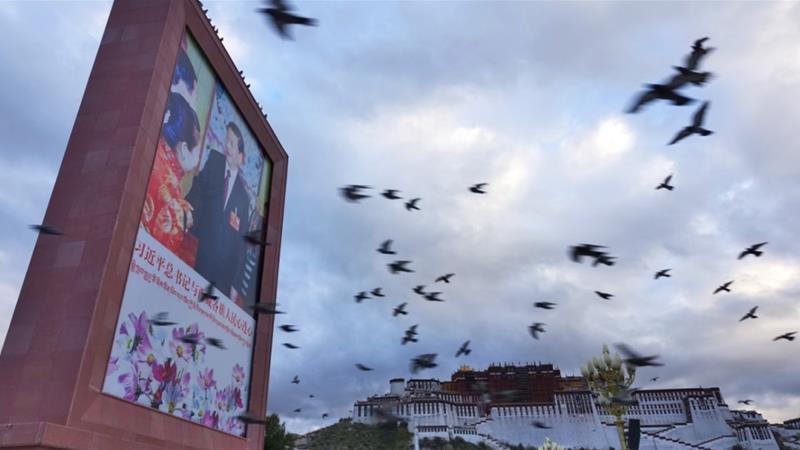 The administration of United States President Donald Trump fired a new shot in its diplomatic war with China on Tuesday by imposing travel bans on Chinese officials it says are restricting foreigners’ access to Tibet.

While waging concurrent battles over Beijing’s policies in Hong Kong, human rights in western Xinjiang Province, global trade practices and China’s assertive moves in the South China Sea, the administration hit an unspecified number of Chinese officials with visa restrictions, limiting or entirely eliminating their ability to travel to the US.

Secretary of State Mike Pompeo announced the restrictions in a statement that accused China of systematically obstructing the travel of foreign diplomats, journalists and tourists to Tibet, an autonomous region of China, while Chinese visitors “enjoy far greater access to the United States”.

The statement did not name any of those targeted nor did it give a number of those affected, but it said the ban would be applied to Chinese government and communist party officials who are found to be “substantially involved in the formulation or execution of policies related to access for foreigners to Tibetan areas.”

“Access to Tibetan areas is increasingly vital to regional stability, given the PRC’s [People’s Republic of China’s] human rights abuses there, as well as Beijing’s failure to prevent environmental degradation near the headwaters of Asia’s major rivers,” he said.

Successive US administrations have sought to press China to ease restrictions on foreigners’ travel to Tibet, where human rights activists say Beijing has engaged in a decades-long campaign to suppress local culture, the Buddhist religion and minorities.

Permission to travel to the region is rarely granted, and visitors are subject to strict regulations when it is.

China crushed a Tibetan uprising in 1959, forcing the spiritual leader, the Dalai Lama, and over 80,000 Tibetans into exile in India and other countries.

The March 1959 revolt was brutally put down with estimates of tens of thousands of people killed by Chinese troops.

US-China relations have reached their lowest point in years since the coronavirus pandemic that emerged in China late last year began to spread around the world. With the US now the world’s worst-affected country, ties have deteriorated further with Trump and his administration repeatedly accusing Beijing of not being transparent about the outbreak.