Britain and other advanced nations should use cheap borrowing to protect the economy from coronavirus and avoid swingeing tax rises or a return to austerity, top economists said – as global debts hit a record £64trillion

The IMF stressed that most advance countries like the UK that can borrow freely are likely to be able to stabilise their debts by the middle of the decade without resorting to austerity or tax hikes in the short-term.

This is largely because they can exploit currently ultra-low interest rates which makes borrowing cheap.

Boris Johnson is under increasing pressure to find a way out of the coronavirus economic catastrophe that avoids both tax increases and measures that will be seen as unfairly targeting the poor, like benefit cuts.

But the idea of increasing borrowing is likely to alarm Tory backbenchers uneasy at increasing national debt.

‘What we see is a one off, jump up of debt in 2020, then stabilization after 2021, and even a slight downward trend in 2025,’  the watchdog’s head of fiscal policy Vitor Gaspar said.

While public debt will stay elevated at about 100 per cent of GDP, resumption of economic growth and extremely low interest rates will help ease primary budget deficits, Gaspar said.

‘The difference between interest rates and growth is not only negative, but more negative – in our projections – than it was before Covid-19. So low interest rates play an important role in debt dynamics.’

Despite advocating borrowing the IMF said global debt has swelled to 100 per cent of world’s entire annual output – or around £64 trillion – as a result of the crisis. 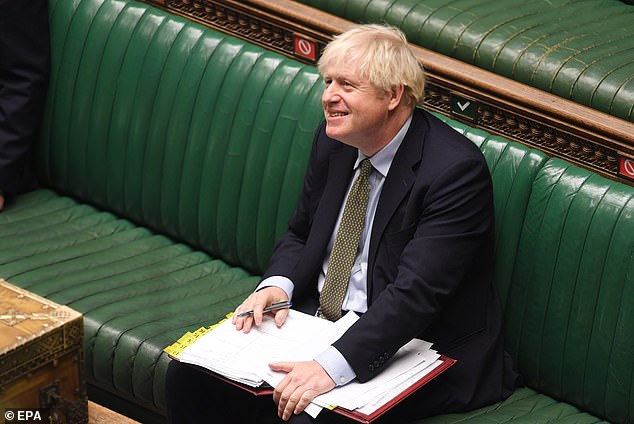 Boris Johnson is under increasing pressure to find a way out of the coronavirus economic catastrophe that avoids both tax increases and measures that will be seen as unfairly targeting the poor, like benefit cuts

He added: ‘The ensuing revenues would help pay for critical services, such as health and social safety nets, during a crisis that has disproportionately hurt the poorer segments of society.’

But the suggestion that some governments will need to increase ‘progressive taxation’ to help cover the cost of the pandemic in due course will fire up debate over how the coronavirus crisis will be paid for.

Andrew Bridgen said: ‘The top 1pc of earners already pay 30 per cent of taxes – so they are the ones that will get us out of this mess. You’ll never make poor people richer by making rich people poorer.’

Public borrowing in the UK is expected to hit £350billion this year and the national debt has just topped £2 trillion for the first time.

Options considered by the Treasury have included increasing capital gains tax on profits made from selling assets such as second homes and shares, and hiking corporation tax on businesses.

The IMF predicted the UK’s debt will grow to be far bigger than the size of the economy in the coming years – hitting 117 per cent in 2025.

This would be more than twice the debt level of Germany, but still below many countries including Spain, Italy, France, the US and Japan.

Britain’s national debt recently hit 100 per cent of GDP, the highest as a share of national income for almost 60 years.

A separate report by Paris-based think tank the OECD warned Britain’s national debt will hit 120 per cent of GDP in the coming years – which equates to around £2.4 trillon.

It warned debt levels will become unsustainable unless action is taken.

Alvaro Pereira at the OECD said; ‘Fiscal prudence is something that, after the pandemic is over, will have to be addressed.’

Chief economist Laurence Boone said a combination of Covid and the prospect of a No Deal Brexit has made the outlook for the UK economy as ‘exceptionally uncertain’.

The OECD predicted the UK economy will shrink 10.1 per cent this year, bouncing back by 7.6 per cent next year.

Official figures published on Tuesday showed the UK’s unemployment rate has risen from 4.1 per cent to 4.5 per cent over the summer – the highest level in three years.